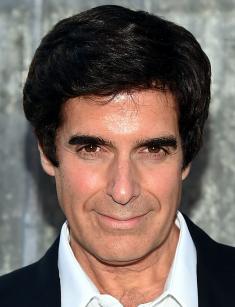 The American illusionist and hypnotist David Copperfield managed to convince hundreds of thousands of people that magic is real. The famous hoaxer became popular after the release of his author's television program on the big screens.

On September 16, 1956, the owner of the clothing store Hyman Kotkin and his wife, the insurance agent Rebecca (born in Jerusalem) had a son, who was named David. The Jewish family lived in the state of New Jersey, the city of Metuchen. Copperfield was attracted by all mystical and mysterious from his childhood. The illusionist recalls that his grandfather had a significant influence on his future, who entertained his grandson with card tricks in the intervals between studying the Torah and memorizing the Psalms.

At the age of 7, the boy, who perfectly mastered the technique of the card manipulation, spoke to the parishioners of the local synagogue with a mini-show and broke the applause of the audience at the performance. David continued to hone the skill of the magician at school, preferring pursuits the development of new tricks and stunts. At the age of 12, a young magician came into the American society of magicians, becoming the youngest member.

At the same age, he saw the British television series David Copperfield of Joan Craft, after watching which the future famous hypnotist decided on a stage name. Not many people know but Kotkin began teaching the art of magic to the students at New York University at that age of 16. After receiving a high school diploma, David entered Fordham University, which he could not graduate.

In 1974, the active guy received one of the main roles in the musical The Wizard and left school, preferring a diploma of creative self-realization. In 1978, Copperfield moved from the theater stage on television: an ambitious young man led the program The Magic of ABC, played a minor role in the film Terror Train in 1979 and he released the author's program "Magic of David Copperfield" in the early eighties. During the filming of the series, David decided to realize his long-standing idea of creating large-scale illusions by all means.

His loyal team (more than 300 people) helped David in all his tricks. In the nineties, there were huge trucks with his details crossed the border with special passes without inspection for the sake of preserving the secrets of the illusionist when Copperfield gave 50 performances a month. As David's popularity grew, the scale of the illusions he showed to the public also increased. In 1983, the magician made the Statue of Liberty disappear for a few minutes.

Those people, who saw this trick assumed that the image on the radar was an imitation and the audience, who watched and admired the trick, were the actors. Timur Abdulov explained that the audience is real and the installation is an empty pedestal of the Statue of Liberty from the helicopter. The rest was achieved by turning off the light around the sculpture. The spotlights, on which the curtain was fixed, were directed towards the audience at the show.

In 1984, the biography of David had another trick. He flew across the Grand Canyon in Arizona the same year. The levitation became an integral part of the magician's performances after the test flight. It is noteworthy that Copperfield flew through the rotating hoops and flew into the glass cube on the stage from time to time, indirectly proving that the matter of magic and not in the ropes.

Nevertheless, skeptics believe that the illusionist is suspended to a special crane with special thin cables with a diameter of less than 1 mm. Such thin wires can withstand up to 220 lbs (100 kg) and you can not see it with the naked eye.

Another trick of David Copperfield is his passing through the Great Wall of China (1986). A special tent was installed near the wall, in which the magician came in. There was a movement in the form of shadows on the walls of the tent, allegedly created by the magician up to his entry into the wall. David hid in a special secret compartment of the bottom of the tent during his disappearance.

There was the same trick with shadows while transferring the construction to the other side. In the end, David, who was in a specially prepared hiding place all the time, could only get out of the bottom and out of the tent on the eyes of the astonished audience, making them believe in the miracle.

It is worth noting that not all performances, in which Copperfield played with death, ended successfully. So, the hypnotist was chained and placed in a container of water at the rehearsal of the focus "Escape from death" in 1984. Copperfield became entangled in the chains and drowned. The illusionist was pulled out of the water only after 1 minute and 20 seconds. It was known in the hospital that the artist was not released from the prison because he pulled the tendons of his hands and feet.

Sneaky journalists found out the most interesting and scandalous details about the magician's communication with representatives of the weak half of humanity despite the efforts of the master of reincarnation not to publicize his personal life. His affair with the blond German model Claudia Schiffer made a lot of noise. The whole world discussed a love story for a couple of years, which was not valid.

The relationship between Claudia and David began at a time when there was a decline in the popularity ratings of Copperfield. The PR manager of the artist Wendy Leister signed a contract with the PR service of the supermodel to return the client to the front pages of publications. The essence of the agreement was that Schiffer will play the role of the Copperfield`s bride for a fee of $250 thousand and the illusionist will give his "beloved" gifts (jewelry, flowers)as a bonus, which she should show the audience, in addition to the annual payment of the agreed amount.

The only thing that the charming blonde could not do in these pseudo-relationships is to appear with other men in public. Celebrities began dating in 1993 and there was a copy of the contract on the pages of the French magazine Paris Match in 1997. David said that the document is false and filed for publication in court and the model chose to remain silent. As a result, the romantic fuse of the stars was enough for another two years, after which the couple broke up.

At the moment, the 60-year-old artist is engaged to the designer Chloe Gosselin. Copperfield met a charming French woman at a fashion show in 2006. In 2011, the chosen one gave birth to David's daughter, whom happy parents called Sky and the family moved from the bustling city to the island, belonging to the illusionist in 2012.

In March 2017, David appeared on the transmission channel Bravo TV Top Chef Masters. As a guest expert, Copperfield assessed the culinary masterpieces that were prepared by the project participants. David Copperfield has a net worth of $1 billion.

In addition to visits television shows, film screenings and exhibitions, photos from which the artist puts on "Instagram" and "Facebook," the wizard continues to be involved in charity. It is known that there is still the program that helps people with disabilities to develop sleight of hand. The magician also did not forget about his brainchild: he has his cafe, which he opened in New York.

The feature of this institution is the lack of staff. Ordered dishes materialize in front of visitors directly from the air. The cafe is famous for its warm atmosphere and brings to the illusionist income. The presence of the business and active social life does not affect the magical performances that are regularly held at the MGM Grand Las Vegas.