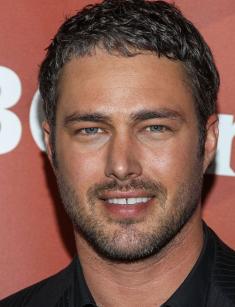 Taylor Kinney is an American actor who became famous for the roles in television series. The most significant work of Kinney is considered to be the role of Lieutenant Kelly Severide in four TV series: Chicago Fire, Chicago P.D., Chicago Med, and Chicago Justice.

Taylor Kinney was born in the city of Lancaster, Pennsylvania, in July 1981. In addition to him, the family had three more sons: Adam, Trent, and Ryan (died in 2008). Shortly after Taylor's birth, his parents divorced. When the husband left, Pamela Heisler Kinney, who worked as a dentist, raised children and provided enough money to support the family.

Taylor Kinney has mixed ancestry. His father was of Irish descent, and the mother had Swiss and German ancestry. From a young age, the boy was interested in football. He studied well at school, preferring the exact sciences. After graduation from high school, Taylor Kinney went to West Virginia and easily entered the university, where he chose the business management department.

Studying at the university, the young man continued to play sports. He was heavily built and handsome. So, a modeling agent noticed him and offered to walk on the runway. Soon Kinney began to work in a modeling agency. His photos appeared in Cosmopolitan, Vogue and Glamor magazines.

Taylor Kinney began his acting career in 2006. He made his debut in one of the episodes of the series CSI: NY. But before shooting in the movie, Taylor had played in two theater production. On the theatre stage, he was noticed by an agent who looked for actors to play in the popular American TV series.

After playing on the series, Taylor Kinney was immediately offered a new role in a multi-part project again. But this time the part turned out to be more prominent and important. The young actor starred in the popular series Bones, in the season that aired in 2006. The same year, Kinney was invited to work in the full-length film Furnace which can be considered Taylor's future career springboard.

The young actor got the starring role in the soap opera Fashion House. It was this series that made Taylor Kinney a real star, whose life was covered in tabloids.

Viewers and a considerable army of Kinney's fans could not but notice his work in the film Champions, which told about the fate of 8 athletes who were selected to participate in the Olympics. Taylor's sports training was very useful since he could show good physical health.

From 2006 to 2008, the series What About Brian was broadcast on many television channels in America. Taylor Kinney also starred there. At the same time, he appeared in the full-length film White Air. Both projects were popular with American viewers, and the actor became even more famous. But his popularity increased when Taylor Kinney appeared as a young writer and doctor, Glenn Morrison, in the TV series Trauma, which told about the life of doctors and patients. Preparing for this work, the actor spent many days together with the real emergency physicians. He went with them to patients in an ambulance and immersed in the nature of the work. Throughout 2009, millions of US viewers watched Trauma.

The following year, Taylor Kinney received a new starring role. Moreover, he was lucky to work with the outstanding cast. Kinney starred in the TV series The Vampire Diaries together with Ian Somerhalder, Paul Wesley, and Nina Dobrev. Taylor appeared as Mason Lockwood in the second season of the project. Kinney had not played similar roles before, so he doubted for a long time whether this character would suit him. But the first reviews after the release of the series dispelled all doubts. It was The Vampire Diaries that gave Kinney the opportunity to play in the projects Shameless and Rizzoli & Isles.

In 2012, Taylor Kinney got the role of Lieutenant Kelly Severide in the TV series Chicago Fire. The experience he had gained during the filming of Trauma helped Taylor Kinney. The series shows the everyday life of rescuers, firefighters, and paramedics working at Firehouse 51 in Chicago.

Taylor Kinney’s character appeared in all seasons. The actor played the role of the leader of Rescue Squad 3. Severide suffers from spinal cord injuries and takes painkillers. The trauma of the rescuer and regular conflicts with the leader of another group put Kelly's career in jeopardy. Five seasons of the series about firefighters was released, and on May 10, 2017, the television channel renewed Chicago Fire for the sixth season. Besides, the series has a series of spin-offs about other Chicago services. In 2014, Taylor Kinney played the same but minor role of Kelly Severide in the new series Chicago P.D.

In 2015, the new third installment of the same franchise entitled Chicago Med was released. The same year, the actor won the People's Choice Award for Favorite Dramatic TV Actor.

In the summer of 2011 during the shooting of Lady Gaga’s video, Taylor Kinney became closely acquainted with the bodacious singer. They starred together in a sex scene. It seems that the passion on the screen turned into a real one. On Valentine's Day in 2015, the actor made the beloved woman a marriage proposal, presenting an engagement ring featuring an 8-carat heart-shaped diamond, and the singer agreed. Although the 4-year relationship was somewhat complicated, the couple has a great deal in common. For example, they love surfing and traveling. Kinney dreams of a wedding in Morocco. He liked this country when he starred in the movie Rock the Kasbah.

Taylor wants to have a lot of children. The singer said that she was brought up in a large family, too, and she wants to hear the baby laughing in her house. According to the stars, their tight schedules were the only obstacle for the marriage at that time. They could not set a wedding date for a long time, but fans were waiting for an upcoming and eccentric marriage.

In June 2016, fans realized that their wedding would not take place. The former lovers stopped appearing together in public and sharing their photos on Instagram. Later, the paparazzi noticed that Lady Gaga did not wear the engagement ring. The representatives of Lady Gaga and Taylor Kinney did not officially confirm the information, but the journalists managed to announce that the couple had broken off the relationship. It turned out later that the stars decided to take a break in the relationship.

Personal problems did not hamper the career development of the actor. In 2016, the actor played the leading male role in the horror film The Forest. Kinney's character is journalist Aiden who goes to the mystical Aokigahara Forest in Japan to help young American Sara Price (Natalie Dormer) find the missing twin sister.

In 2017, Taylor Kinney returned to the role of Lieutenant Kelly Severide in Chicago Justice, the fourth installment of the popular franchise about the rescue service in Chicago. The new series focuses on the work of prosecutors. On May 22 of the same year, the NBC television channel closed the project after the release of the first season.

In February 2017, Taylor Kinney and Lady Gaga began to appear together in public again. Journalists rely on close friends of the couple and claim that during the break neither the actor nor the singer tried to date other people and only loved each other. The press is waiting for official confirmation of the reunion, which, according to fans, is just a matter of time. 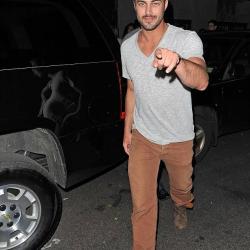