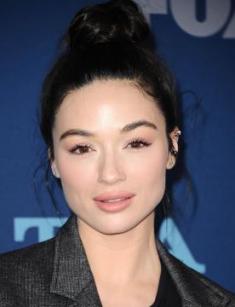 In 2009, it was reported about the new project of the MTV channel, the adaptation of the cartoon Teen Wolf, released in the 80s. The audition began in December. Crystal Reed was cast in one of the leading roles. The character of Allison became the most successful in the career of the actress.

The hometown of the Teen Wolf start is Detroit. Crystal spent her childhood and began an acting career there. Reed's parents are Catholics, which did not prevent her from attending a Baptist church. The main passion of the girl was dancing. Crystal attended dancing lessons from an early age, and as a schoolgirl, participated in various competitions. Dancing classes left their mark. Crystal had good body measurements to become a model. She is 5.64 ft. (172 cm) tall, weighing 121.25 lbs. (55 kg). Although Reid did not appear in commercials even in her youth.

Crystal played her first role in an amateur theater. In her hometown, she graduated from a university, played in the musicals Annie, Grease, then left for Chicago. Young Americans, dreaming of an acting career, always move to Hollywood. Crystal also did it. Reed moved to the famous neighborhood in Los Angeles at the age of 23.

At the beginning of 2018, Reed managed to receive two prestigious awards. She made her debut in Skyline. Crystal played the victim of a monster that invaded Los Angeles in the low-budget horror movie. Critics gave the movie negative reviews, citing a flat storyline filled with uninspired dialogue. Viewers were not enthusiastic about the horror film. Nevertheless, the director said that the continuation of Skyline would be released presumably in 2017. However, they did not make it.

In 2010, the aspiring actress appeared in TV series but played minor characters. The role that Reed got in the tragicomedy Crazy, Stupid, Love did not make her famous either. Unlike Skyline, this movie received positive reviews.

But Crystal appeared in only a few scenes, and film critics did not pay attention to the young actress. However, Reed was not upset, because when tragicomedy appeared in cinemas, viewers had been already sitting on the edge of the seat, watching the TV series about werewolves for more than a month.

For four years, Reed played the girlfriend of the protagonist, a young man who became a werewolf against his will, in Teen Wolf. Crystal said in an interview that Allison became more than a fictional character. It was not easy to say goodbye to her heroine.

Nevertheless, the creators wrote about the death of Allison at the instance of the actress. In the 47th episode, which is entitled "Insatiable," Allison is killed with arrows by a demonic warrior. The actress claims that this scene has become the most difficult part during four years of filming in the mystical series.

Fans immediately reacted to the death of their beloved heroine. So, there were photos of tattoos depicting Allison’s arrow on social media. The actress, who seemed to be used to the popularity of her character, was struck by such an emotional reaction of her fans. Perhaps viewers’ love influenced Reed's decision to return to the project in 2016.

The scriptwriters did not resurrect the favorite heroine. The actress played in Teen Wolf again but appeared as Frenchwoman Marie Jeanne. She combined the shooting in Teen Wolf with roles in other projects.

In 2011, Reed appeared in the TV series Drop Dead Diva. She played a guest role in this project. Reed became so popular after the first season of Teen Wolf that in 2011, she was also offered to play a cameo role in the popular comedy series in the United States. In April 2013, the movie Crush was released, in which Crystal played Bess, the title character. The movie grossed $12 million against a production budget of 1.2 million but received negative reviews.

In 2015, the actress, who became famous for her role as Allison, played in a movie that was aimed at older viewers. The detective film Too Late did not cause a stir because people did not like the boring scenes and strange dialogues. However, this time, Reed played an unusual role as a stripper. Her heroine dies at the beginning of the movie.

A girl named Dorothy (Crystal Reed) appears in flashbacks, usually together with John Hawkes, who played the role of an eccentric detective. Although Crystal portrayed a striptease dancer in the movie of the noir genre, viewers could not see her naked. Her character is a dreamy girl. She works in a hot place, but in her free time, she reads classical literature. The movie received awards at film festivals in Los Angeles and Oldenburg.

The actress dated Daniel Sharman, whom she met on the set of Teen Wolf. The relationship of the celebrity couple was short-lived. In 2013, it became known that the couple broke up. It was Daniel who decided to separate. The actress said in an interview that it was the first time in her personal life when she did not make the decision.

For three years, Crystal did not start a new relationship. In 2016, she began to appear together with Darren McMullen at public events. Reed confirmed the rumors about the love affair with the 34-year-old actor on Instagram, posting a sweet message.

Some people are interested whether Crystal is related to her colleague Nikki Reed. However, the girls grew up in different cities and were brought up in different families. They have nothing in common, except for a surname, which is very typical in English-speaking countries. Nikki's biography is much richer because, at the age of 14, she already lived separately from her parents, and she made her film debut at the age of 15.

In 2017, the raven-head actress played the daughter of the Italian mafia leader in Gotham, a series based on characters published by DC Comics. Reed’s heroine appeared in the fourth season, released in September.

Fans of the horror genre are eagerly awaiting a new project, featuring the popular actress. In March 2018, the movie Ghostland was released and directed by Pascal Laugier.