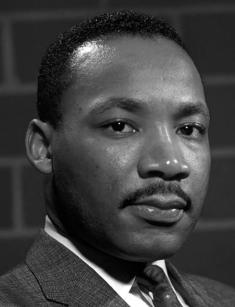 Martin Luther King was one of the greatest American activists; he fought for human rights and freedom. The famous orator became the laureate of the Nobel Peace Prize, and his equality framework served as the basis for the modern civilized society. King is the icon of the struggle against segregation in the United States; the majority of people all over the globe shared his views.

Although slavery was abolished in December 1865 in the course of the civil war, the stereotyped layers of society did not change their attitude to people of color at the beginning of the 20th century: the state did nothing to protect them.

Non-white people’s rights were violated, and they were treated like dirt: the colored could not get a good job and had no opportunity to make choices. After the civil war, the nonofficial Jim Crow laws governed everything, so the minorities could not be equal to the whites. Even those who had few black ancestors were considered the colored.

Martin Luther King was born in the middle of the social conflicts on January 15, 1929, in Atlanta, Georgia. This is where the majority of middle-class black people lived.

The boy’s father, Martin Luther King Sr., was a Baptist preacher, and the mother, Alberta Williams King, worked as a teacher before her marriage. The father’s name was Michael, but he changed it, as well as his six-year-old son’s name, to Martin.

The would-be politician was the second child in the family. The Kings did not live in poverty: on the contrary, they belonged to the upper-middle class and could afford many things.

Martin was brought up in a strict religious atmosphere; the parents used corporal punishment for some misconduct. However, Martin Sr. and Alberta tried to protect their son from the widespread racial hatred.

When the boy turned six, his friend who used to play with him in the yard suddenly announced that his mother did not allow him to play with Martin because he was black. Alberta Williams tried to comfort her son and kept telling him he was not worse than other kids.

When King turned ten, he was a Baptist choir member. At that time, the movie Gone with the Wind was premiered in Atlanta; the choir participated in that event.

The future political activist was wise beyond his years. Martin Luther King was an excellent student in the school for black children; he mastered the school knowledge on his own and entered the Morehouse College at 15. In 1944, Martin won a victory at an oratorical contest among colored people in Georgia.

Soon, King joined the National Association for the Advancement of Colored People and discovered that black people and some whites stood against racism.

As a student, the young man often helped his father at Ebenezer Baptist Church; in 1947, King became a church assistant. The next year, Martin finished Morehouse with a B.A. in sociology and continued his education at Crozer Theological Seminary, Chester, Pennsylvania. In 1951, the future revolutionary got a B.Div. degree. Finally, he studied systematic theology at Boston University and graduated in 1955 with a Ph.D. degree.

Martin Luther King followed in the footsteps of his father and grandfather and became a Baptist preacher in 1954. Throughout his life, the man was inspired by the ideas of freedom and equality. King was a wonderful public speaker, and he used his abilities efficiently.

Martin was an active participant of the National Association for the Advancement of Colored People. In 1955, he became a leader of the Montgomery Improvement Association.

The man led the Montgomery bus boycott. Unofficially, colored passengers could not take the first four rows in a bus: they were supposed to be taken by whites only. Besides, some bus drivers behaved in the wrong way and insulted black people. An American activist Rosa Parks refused to give her seat to a “privileged” man, and the local police arrested her. It was not the first case of the social arbitrariness: innocent black people were frequently arrested. A bus driver could even shoot an African American passenger and bear no responsibility.

Martin Luther King could not agree with that. He organized a peaceful boycott of transport; many black people attended it. The protest lasted for 382 days; some 6000 persons participated there. The colored did not use public transport and walked; they promoted the ideas of freedom and equality. Sometimes, African American drivers gave a lift to protesters.

The long-term measure brought success: in 1957, the US government decided that the violation of colored people’s rights in Alabama was not constitutional. Time published Martin Luther King’s photo on its cover and the interview with him.

Not everybody supported King, though. During the protest, there were several attempts on his life; somebody tried to blow up his house. Martin Luther King was the icon of the colored: they saw him as the symbol of the struggle for the equality. Thanks to his new method of nonviolent resistance, the politician got the Nobel Peace Prize.

Another field of King’s activity pertained to the struggle against any type of segregation. In 1962, he joined The Alabama Christian Movement for Human Rights and encouraged university students to participate in meetings. Although Martin Luther King’s movements were nonviolent, the police interfered with them: for instance, they unleashed service dogs to students. King himself was arrested many times.

In 1962, the University of Mississippi accepted the first black student James Meredith; he was the first colored who entered an education institution. Before that, people had to study at special colleges separately from the white. It was an outstanding achievement. However, not all people agreed with that. For example, Governor of Alabama George Wallace supported racial prejudice and blocked the way to the university to two black students.

Martin defended the unprivileged and continued to fight against segregation for many years. However, he is more famous for another part of his political biography. In 1963, the March on Washington for Jobs and Freedom took place; some 300 000 people gathered together. King delivered his most popular speech beginning with the words: “I Have a Dream”. He promoted peace among different nations and said that no matter what color a person was, their inner world mattered. The leaders of the march met the American President Kennedy and discussed significant social problems. In 1964, The Civil Rights Act prohibiting violation of colored people’s rights was signed.

King did not limit his activities to the problem of racial segregation. The politician spread the idea about equality and freedom for all American citizens; he was frustrated with the existing level of unemployment and starvation.

Martin often traveled and delivered speeches; he persuaded people to fight for their rights that should be guaranteed to any person. According to the activist, any social struggle should not nonviolent: people can negotiate without mass riots and wars because they can talk to each other. Luther wrote many books that became the fundament of the modern law and social order.

Martin Luther King was a cheerful, kind person. He set a good example of a family man and a loving, respectable father of four children.

King met his future wife, a conservatory student Coretta Scott, in 1952 in Boston.

King’s parents liked the young woman and blessed their marriage. In summer 1953, Coretta and Martin married in the house of the woman’s mother; it was Martin’s father who married them.

In fall 1954, the family moved to Montgomery, Alabama, where the politician began his social activities.

In February 1968, the riot of African American garbage collectors organized a strike: they were not satisfied with their earnings, working conditions, and attitude of the administration. It was like the segregation: white employees had privileges and were allowed not to work because of bad weather conditions. In comparison, black people had to collect garbage anytime, even during storms.

People addressed Martin Luther King, the only protector of the colored.

On April 3, King went to Tennessee. He had to change the flight: there was a bomb threat in the plane. The social activist booked room 306 at the Lorraine Motel. The next day, Martin was standing on his balcony; a white criminal James Earl Ray shot him in the jaw. The politician died at St. Joseph's Hospital at 7:05 p.m.

Before his death, Martin delivered a speech “I've Been to the Mountaintop”. People remembered his words:

“Like anybody, I would like to live a long life. Longevity has its place. But I’m not concerned about that now. I just want to do God’s will”.

The police caught James soon: the young man signed the confession as he believed to have a mitigated punishment. The court sentenced the criminal to 99 years of prison; Ray claimed he had not killed King, but the court insisted the man was guilty.

However, there are many unclear details about King’s murder. For instance, it is unknown what weapon the sniper used, and there was no convincing evidence that Ray did murder the activist. Martin’s wife was not satisfied with the court decision: she believed it was a political conspiracy, not a fugitive, that destroyed her husband. Thus, when Ray died, Coretta was sad: the only witness could no longer reveal the truth. Today, it is still unknown who murdered Martin Luther King and what gun was used.

In memory of the political leader, Martin Luther King Jr. Day is held every third Monday in January. The holiday was established in 2000.

Besides, there are many documentaries about the politician’s activities.

King’s grave is located at the King Center in Atlanta, Georgia.

Martin Luther King is known not only for his quotes on human rights but also morality. The American politician was notable for his bravery, persistence, and generosity. 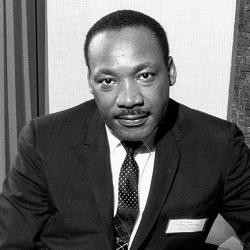