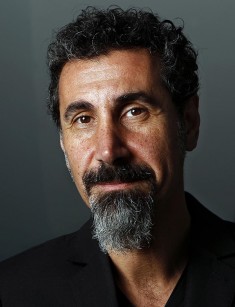 Serj Tankian is an American musician of Armenian origin, a vocalist of the band System of a Down and the founder of the solo project Serj Tankian.

The future musician was born in August 1967 in the Lebanese capital of Beirut. Serj Tankian’s parents Alice and Khatchadour are Armenians by nationality, but the birthplace of his father is Syrian Aleppo. Khatchadour is a musician and owns the record company Serjical Strike Records.

Serj was the first son in the family. When the family decided to move to Los Angeles, they brought up younger son Sevag, besides 8-year-old Serj.

In the capital of the Hollywood "dream factory" and pop music, Serj Tankian attended the bilingual Rose and Alex Pilibos Armenian School, where he studied the basics of marketing and was very interested in music. Soon the young Tankian mastered the guitar playing and began to sing.

The future vocalist listened to the music of different genres: rock, punk, hip-hop, extreme death metal. The national music of Armenia, Greece, France, England, as well as Arab music, influenced his tastes in music. Later, this mix of cultures and styles would result in the syncretic music of System of a Down and other Tankian’s projects.

In the mid-1980’s, Serj Tankian graduated from high school and continued to study marketing. Four years later, he became a Bachelor of Business Administration.

The creative biography of the musician began rather late. At the age of 20, Tankian turned to music as the main occupation. He came to this decision after trying his hand at trading and programming. He thought about legal education, but stopped in time, pursue his main interest.

In the early 1990’s, Serj Tankian got acquainted with the guitarist and vocalist Daron Malakian after joining the Armenian community in Los Angeles. In 1994, the young men organized the first musical band Soil. Tankian, Malakian and fellow compatriots: bassist Shavo Odadjian and drummer John Dolmayan remained in the band after several changes in membership. In 1995 the band was renamed into System of a Down (SOAD).

Tankian presented the debut solo record Elect The Dead in October 2007. It included old and new songs of SOAD. Serj Tankian with the band went on tour. The first concert in support of the album was held in Chicago. Elect The Dead included popular songs “Sky Is Over” and “Lie Lie Lie”, performed in the genre of progressive metal and rock. Soon they shot music videos for these songs.

In 2008, the vocalist participated in the recording of the album of the Praxis band. The album was entitled Profanation. In the autumn of 2009, Serj Tankian in a duet with his father performed in his historical homeland. They sang Alexey Ekimyan’s single. The song in Armenian was broadcast live on the Armenian television.

The beginning of 2010 was marked by a surprise, which the singer made to fans. He recorded the first track, accompanied by a symphony orchestra. The song “Empty Walls” is the flagship of the live album Elect the Dead Symphony, recorded with orchestral arrangements.

In early 2011 SOAD and its vocalist delighted music lovers and fans with the musical about Prometheus. In August, before the concert in Yerevan, Serj Tankian was awarded the Medal for his contributions to the recognition of the Armenian Genocide and the advancement of music.

In the summer of 2012, Serj Tankian presented music fans the rock album Harakiri, and in early 2013 announced a collaboration with hip-hop vocalist Tech N9ne. The same year, the album of rapper Something Else was released and it included the joint composition Straight Out The Gate.

The result of the collaboration of Serj Tankian with Italian composer and DJ Benny Benassi was the song “Shooting Helicopters”. The composition was included in the Benassi’s electronic dance music album Danceaholic, released in 2016.

In 2017, Tankian with Ekaterina Ivanchikova, a soloist of IOWA, starred in the video for the song "A Fine Morning to Die, which became the soundtrack to the film Furious (The Legend of Kolovrat).

Serj Tankian cares about the fate of Armenia and has repeatedly stated his opinion about the massacres of compatriots in the Ottoman Empire. On the day of commemoration of the victims of the genocide, the singer of System of a Down and his supporters appealed to US President Barack Obama to officially recognize the Armenian Genocide in the first quarter of the 20th century.

As part of the campaign, Serj Tankian wrote an article about the tragedy of the people, telling the dramatic fate of his grandparents, who were brutally murdered in those years.

The artist's wife is Armenian Angela Madatyan. The relationships lasted for eight years since 2004. Angela was born in Vanadzor, the third largest city of Armenia.

Tankian and Madatyan got married in the summer of 2012. The wedding took place in a symbolic place for future spouses in the city of Etchmiadzin. It is one of the most significant cultural and religious centers of Armenia, its spiritual center since the beginning of the IV century.

In October 2014, Angela, who is 16 years younger, gave birth to the first son, Rumi. Serj Tankian was 47 at that time. The singer rarely tells about his private life, but at his son's birth, he was so happy that posted the photo of his son on Instagram.

The vocalist loves New Zealand. Tankian has a cozy house there, where he can hide from close attention of fans and the media.

Serj Tankian is a convinced vegetarian. He said in an interview that he changed his way of life “somewhat instinctively.” The artist shows respect to our Mother Earth this way. In the summer of 2009, the singer signed a collective PETA appeal, protesting against the cruel methods of slaughtering chickens in slaughterhouses.

The rock musician did not remain indifferent to the political events that took place in Armenia in the spring of 2018. Serj Tankian congratulated Nikol Pashinyan on his victory and wished success to the new government.

Earlier, Serj Tankian visited Yerevan and supported the protest action of the opposition, calling it "a beautiful revolution." He wrote to the fans on Instagram that he would not give a concert, and sang only one song in Armenian. It was the song "White Stork".

Tankian admitted to journalists, commenting on the events in the country that he did not sleep at night and was watching the events online. He is sure that the people are ready for a decisive step forward and believe in Pashinyan.

When Nikol Pashinyan became the Prime Minister, he received the famous rock musician of Armenian origin and thanked for his support. The politician and the singer discussed the events in the country and its future. Tankian wished success and effective work to the new government, and Pashinyan admitted that on the way back from the airport he tried to persuade Serj to return to his historic homeland. 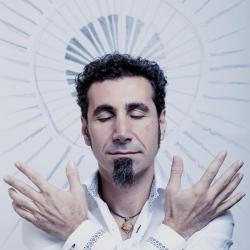