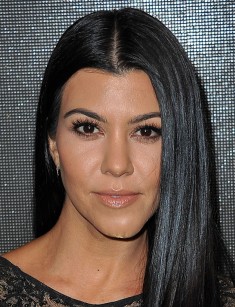 Kourtney Kardashian is one of the most famous girls in the American show business. Kourtney is a socialite, a successful businesswoman, a mother of many children and just a beautiful young woman who has gained a great number of admirers and haters all around the world. The truth is the fact that perhaps there are no people who are indifferent towards this charismatic brunette.

Kourtney Kardashian is the eldest daughter of Robert Kardashian and Kris Jenner. The girl was born on the 18th of April, 1979. The father of the family worked as a lawyer, and her mother devoted her life to education and upbringing of the children. Kourtney has two real sisters — Khloé and Kim Kardashian, and three sisters-in-law — Michelle, Kendall, and Kylie. Also, the girl has four brothers - three stepbrothers and one real.

Kourtney Kardashian has got an expressive and attractive appearance in many aspects due to the blood mixture: the girl's father is Armenian, and her mother presented to her daughter the mixture of Dutch and Scottish roots.

Kourtney Kardashian received a good education. At first, the girl studied at Marymount High School, a Roman Catholic school for young ladies. And then, having moved to Dallas, Kourtney entered the Southern Methodist University. However, she had studied here for two years only. From Dallas Kardashian had moved to the city of Tucson in Arizona.

There the beautiful girl entered the University of Arizona where she received a bachelor’s degree in Theatre Arts and a minor in Spanish. It’s remarkable that Nicole Richie and Luke Walton, who also subsequently became show business stars graduated from the same university.

Having graduated from the university, the girl decided to start her business. Together with her mother Kourtney founded a boutique of clothes for little trendites under the name "Smooch". The departments of this shop work at the same time in New York and in Los Angeles. This business became profitable at once.

It is also known that the girl became a co-owner and a managing director of the clothes chain store under the name "D-A-S-H" which is popular in Los Angeles. After a while, having accustomed to the world of business and having gained necessary experience, Kourtney Kardashian together with her sister Khloé opened one more office of the "D-A-S-H" brand, this time - in Miami.

The thirst for glory and publicity didn't let the girls make the opening of the shop a modest and ordinary event. The sisters dedicated the reality show which was called "Kourtney and Khloé in Miami" to the foundation of their "D-A-S-H" boutique. The whole country was watching the events from the life of two gorgeous girls and the surname of Kardashian became even more well-known and popular.

The "Kourtney and Khloé in Miami" project was not the only similar show organized by the Kardashian family. In 2005 Kourtney took part in the project "Filthy Rich: Cattle Drive" to earn funds for the charitable purposes.

In 2011 - 2012 the audience was watching the show "Kourtney and Kim in New York". The admirers of the girls had got a chance to see how the beauties were living and also to observe the opening of the new shop in New York.

A year later the audience was delighted with the next similar show: the shots from "Kourtney and Kim in Miami" returned the audience to the hot beaches of Miami, together with the sisters Kardashian.

Besides the reality shows in which Kourtney Kardashian had appeared before the audience as herself, the girl was lucky to participate also in the real shootings of feature series. We’re talking about the project by Agnes Nixon under the title "One Life to Live".

This soap opera for the first time came out on the TV screens in 1968. The series continued to delight the audience with new seasons and characters till 2012. Kourtney Kardashian got the role of Cassandra Kavanaugh, a woman who works as an attorney.

As well as other milestones of the biography of Kourtney Kardashian, her personal life wasn’t kept in a secret from the audience and her admirers. The beautiful girl with a gorgeous figure (Kourtney's growth is 152 cm, and her weight is 52 kg) never suffered from the lack of male attention.

In 2006 the secular young lady announced the love affair with Scott Disick, a successful businessman. In spite of the fact that Kourtney and Scott didn’t get married officially their relations lasted until 2015.

Unfortunately, even the strongest relations can break up. After a while, after the birth of Reign Aston, the spouses separated. This parting had instantly acquired lots of rumors: it was said that Scott was betraying his beautiful wife, therefore Kourtney made the decision to break up with him. There were also rumors about Kardashian who was said to have numerous love affairs, including affairs with Unes Benjima and Justin Bieber. However, there were no official confirmations of Kourtney's infidelity in the press.

At the beginning of 2017 "Instagram" and other social networks were full of the news that Kourtney Kardashian was pregnant for the fourth time. Certainly, the main question was the one about the child's father. As it appeared, the reality was much more obvious, than numerous fictions of curious ill-wishers. Kourtney Kardashian and Scott Disick hadn't broken up finally. Now, the girl is expecting for her baby.

For the period of the pregnancy, the secular beauty took a break in participation in a number of advertising projects and began to post fewer photos on her own pages in the network. However, the admirers of the attractive brunette are looking forward to Kourtney's come back to the screens and society columns. 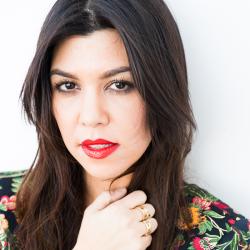