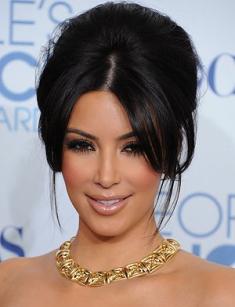 Kim Kardashian is a popular photo model, actress and famous socialite. She was born in Los Angeles on October 21, 1980. Kimberly's father Robert Kardashian is an attorney and Armenian by origin, whose ancestors moved to California from Kars in the 19th century.

Historically, Armenian province, where Kardashian clan appeared, was part of the Russian Empire. And after the infamous events of the early 20th century it passed to Turkey. Therefore, speaking of her origin, Kimberly mentions Russian and Turkish Armenians from her father side, and Dutch and Scottish roots of her mother.

In addition, parents of a future socialite were  already very famous people. Her mother Kris Jenner  is a famous  television producer and hosted her own TV show.

Robert Kardashian gained national recognition as O. J. Simpson's friend and defense attorney during Simpson's 1995 murder trial. O. J. Simpson was accused of killing his wife and her lover. Despite sufficient evidence for the prosecution, the athlete was acquitted and released on bail because of high professionalism of his attorney Robert Kardashian.

Kim has an older sister Courtney, a younger sister Chloe and a brother Robert, who was born in 1986. On March 1991, Kim's parents divorced. A month later, Kris Jenner married the famous American athlete, Olympic champion Bruce Jenner. In addition to his sport achievements he is more famous for his shocking interview. On April, 2015 he announced his intention to change sex and to take different name. As a result, Bruce became famous media person – Caitlyn Jenner.

However, Kim Kardashian’s mom lived with him happily married for over twenty years and gave birth to Bruce's two daughters, Kendall and Kylie. The whole family is known  mainly for a television reality show «Keeping Up with the Kardashians», which premiered in autumn, 2007 on "E!" TV channel. Kim got her first job being a high school student . With her father Robert she worked in musical company «MovieTunes». As a coming-of-age present Kim got an expensive car. Kimberly's father, Robert Kardashian died in 2003.

In 2006, Kim was involved in a scandal. A sex tape made by Kardashian and Ray J was leaked. But when Kim filed a lawsuit against the company, who was going to distribute the film, people thought, that she admitted her involvement in the film. Subsequently, there was a belief that Kim made this scandal herself, in order to get the ratings up. Later Kim dropped the suit and got US$5 million as a compensation.

In 2006, Kardashian sisters opened their first boutique «Dash». An episode in a reality show was devoted to this event. The main buyers of the store were celebrities, mostly friends of Kim’s parents. Earlier, before her adulthood, Kim grew up in condition of maximum freedom, enjoying all the benefits of living in a famous family.

In addition to participating in a family reality show, Kimberly participated in other television projects. 2008 year was memorable for participating Kardashian in a popular show "Dancing with the Stars", where Kim was partnered with professional dancer Mark Ballas. Three weeks of their performance attracted the attention of the audience. Unfortunately, they did not pass the next qualifying round and left the show. It was a serious blow to such an ambitious girl like Kimberly.

One year earlier, in December, 2007, «Playboy» magazine published a series of nude photos of Kardashian. After a while, Kim signed a contract with well-known clothing manufacturer and became the face of the company. Since then, Kardashian take part in fashion shows and advertising campaigns of different fashion brands, including «Quick Trim», «Kotex» and «Sketchers».

As an actress Kim Kardashian debuted in the series «Beyond the Break». She played Elle in four episodes of the television series.

The next notable appearance of a famous socialite was in in burlesque comedy "Disaster Movie" directed by Jason Friedberg and Aaron Seltzer. The film was not a success and was unprofitable. The famous socialite party girl Kim received negative critical reviews. And in 2009 she candidacy was even nominated for an anti-prize "Golden Raspberry Awards" in Category "Worst Supporting Actress".

However, despite everything, a popular model continues her way in cinematography. Among other things, she made a guest star appearance on CBS's CSI: NY.  For participation in "Family Consultant", Kim was re-nominated for "Golden Raspberry Awards " in 2014.

Cinema is not the only interest of Kim Kardashian. She is also interested in fashion design and decoration. Kim and her sisters made a limited series of clothes for “Bebe”  brand . A combination of leather and cotton emphasizes femininity and it is a distinctive feature of Kardashian clothes. Kim has her own project . She designed «Virgin Saints and Angels» jewelry made in the ethnic style.

At the end of 2010 model announced release of her music album. Hip Williams directed video for her single «Jam (Turn It Up)», in which appeared Kanye West. She released one more song specially for the episode of a family reality show «Kourtney and Kim Take New York». She got negative reviews for this song. After that Kim was named “the worst singer in the reality TV universe”.

Autobiography of Kardashian sisters "full of fun facts about their, their beauty and style secrets, the wisdom they learned from their beloved father, and the street smarts they got from their mother that sustain them in life and in business” Kim described in her book “Kardashian Konfidential”.

Kim Kardashian before and after plastic surgery

Surgeons also have disputes about Kim’s impressive bottom. Some of them say that she has good heredity, and the others say about plastic surgery.

Kim does not hide Botox Injections and even shares her feelings after procedure. Kim mentioned Liposuction in 2004. Her husband Damon Thomas insisted on the procedure. But nobody knows the truth.

For 4 years Kim Kardashian was married to Damon Thomas, music producer. In 2004, the couple divorced. According to Kimberly, the reason for the divorce was domestic violence. Damon Thomas, said that could not stand Kim’s affairs.

In 2007 Kim had complicated relationships with Reggie Bush, star of American football. Their  relationships did not last long, and finally ended in 2010.

In 2011 there was another official marriage. Her husband was a “New Jersey Nets" basketball player Kris Humphries. But in 2013, a famous socialite divorced again.

Now Kim Kardashian is in her third official marriage. Her husband is a famous rapper Kanye West. In 2013, she gave birth to a beautiful daughter North West. The girl was born five weeks premature.

Happy Kanye offered Kim to be his wife right after the birth of their daughter. Wedding of Kim Kardashian and Kanye West took place on May 24, 2014. It was a very large-scale celebration. After the wedding in Paris, many private aircraft took guests to Florence. Kim changed 4 dresses during the ceremony. The wedding dress was made by Givenchy.  Musical performance by Lana Del Rey cost newlyweds nearly three million dollars.

The couple welcomed their son, Saint, on December 5, 2015. In her pregnancy Kim gained 15 pounds and now she is trying to lose weight.

Instagram account of Kimis one of the most popular on the Internet. Kim Kardashian is also has shootings in "Playboy" and "Harper's Bazaar" magazines.

Kim Kardashian’s bottom became popular after one photo where she opens a bottle of champagne that blasts right into a glass resting on her ass.

Kim Kardashian West has an estimated net worth of $350 million. (via cnbc.com) 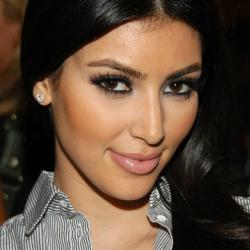