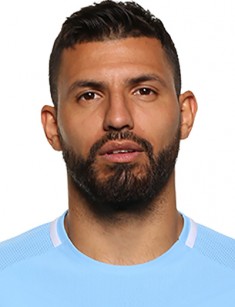 Sergio Agüero was born on the 2nd of June, 1988 near Buenos Aires, in the city of Quilmes. The boy was brought up in a large family. The future football player has four brothers and three sisters, and Agüero was a second child by seniority in his family. His mother Adriana was a housewife, his father Leonel worked as a taxi driver. Their family constantly lacked money for their living.

The boy grew up in a rough area then, later he admitted that if not the football, then for certain he would be imprisoned long time ago. By the way, he began to play football when he was 4 years old. His studies at school were of little interest for him, he spent all days long playing football at the street. Certainly, he was the youngest of all and less strong in his physical parameters then his opponents.

As he couldn't stand up for himself in the fight, they offended him quite often at the field. The only thing that he could make - to win them only at the expense of the equipment and agility. When Sergio turned 9 years old, he began to attend training at local children's football school of Independiente F.C.

His full name sounds as Sergio Leonel Agüero Del Castillo, but his fans know him by his nickname "Kun". He received this nickname in his childhood. Little Agüero constantly tried to parody the hero Kum Kum from the Japanese animated series, but his brothers managed to utter only "Kun". In such away this nickname "stuck" to him.

He had his debut for the Independiente team when he was 15 years old. He became the youngest football player in Argentina who began to play at the professional level.

At such an early age Sergio as a part of youth team of Independiente became the champion of Argentina. During the season he played 54 matches, having scored 23 goals to the rival's gate. The young and prospective player was noticed by the coaches of such football clubs as Manchester United F.C., Real Madrid F.C., and Bavaria F.C.

As a result, in May 2006 the Argentina F.C. sold Agüero to Atlético Madrid F.C. for €23 million. Certainly, during the first games in the new team, he was at the bench. He appeared on the field only in case of replacement.

But as soon as he was let out in the primary team, he at once distinguished. During the season 2006-2007 Kun played 38 matches in which he scored 6 goals. At the end of 2007, Sergio Agüero awarded the prize of the "Golden Boy" – which is handed to the best young player of Europe.

In 2007 he participated as a part of the youth team of Argentina in the Youth Championship which took place in Canada. The striker awarded the "Golden Cup" and "Golden Shoe". Every year the statistics of the football player improved to the best. Already in the next season as a part of Atlético Madrid F.C., he scored 19 goals during 37 games.

In 2008 the striker competed for the national team at the Olympic Games in Beijing, and Argentina became the champion of these games. At the beginning of 2010 Agüero prolonged the contract with Atlético Madrid F.C. for 5 years. Also, the management of the football club got the favorable offer from Tottenham F.C. They suggested to purchase Kun for €45 million. It was an enormous sum, but Atletico F.C. hadn’t agreed to this offer.

In 2015 Sergio Agüero managed to set his personal record. He had scored five goals into the gate of Newcastle United for 20 minutes. Certainly, this match ended with a victory of his team.

The statistics of the striker shows that as a part of Manchester City F.C. the football player on average scores 18 goals during the season. The period of 2012-2013 became an exception when Kun had scored 26 goals.

For 2018 Sergio Agüero is the best striker for all history of the football club's existence. He had scored the greatest number of the goals in all the tournaments. He managed to beat the record of Eric Brook who had scored 177 goals for 493 games.

Agüero got acquainted with his future wife in 2008. The daughter of the legendary football player Diego Maradona – Gianinna became his darling. They didn't have long relations before their wedding. In February 2009 Gianinna gave birth to their son Benjamín. The best friend of Sergio – Lionel Messi became the godfather of his son.

In 2013 Gianinna reported on Twitter that they had separated. When the public began to insult her ex-husband, the girl eliminated it at once, having explained it with the fact that both were always guilty of the parting.

Right after the divorce, Agüero began to meet the Argentinean singer Karina Tejeda. Some admirers of the football player consider that Karina became the reason for his break up with his wife. The girl is two years older than him and she has a daughter from her first marriage. To Sergio's honor, he doesn't forget about his son. He sees Benjamín frequently and their joint photos on Instagram of the football player prove that.

Agüero with his ideal figure (his growth is 173 cm and he weighs 74 kilos) and bright appearance could easily become a model. It’s not surprising that Kun has a lot of sponsor's contract, among them, there are - Pepsi, Puma, Nissan and EA Sports.

When Josep Guardiola became the trainer of Manchester City F.C. Agüero lost his place in the primary team. In 2018 the public began to talk more and more about the possible transfer of the talented striker to Barcelona F.C. If the transfer takes place, then it will be in summer of 2018. Nothing is reported about the sum of the possible transfer.

In March 2018 Sergio got injured on his knee. Guardiola confirmed that Agüero had left the team for an indefinite term. In April the football player was operated.

The chief doctor of Argentina national team reported that he had doubts that Kun would manage to recover till the World Cup. 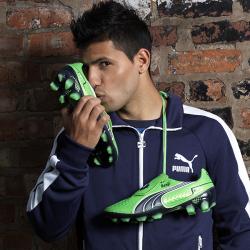