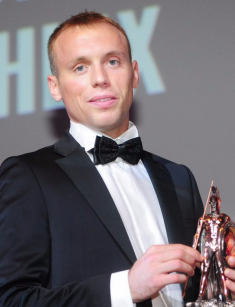 Denis Glushakov is a famous Russian football player, the captain of the Spartak team, a member of the Russian national football team. He plays as a midfielder. Denis Glushakov was born on January 27, 1987, in the town of Millerovo, Rostov Oblast.

Glushakov's parents divorced when the boy was just a year old. Denis lived in a rather poor family in a private house. Since childhood, he used to chop wood in the winter to keep the house warm. The mother brought up the boy alone and Denis's uncle, outstanding Soviet football player Valeri Glushakov, was like his father. In the past, he played in the Spartak Moscow club and in the USSR team. Although the famous uncle helped the family, since early years Denis began to work. He took sacks from the mill, picked up scrap metal, carried coal.

Little Denis looked up to his uncle and, of course, he was carried away by football. When Valeri saw the talent and aspiration of his nephew they moved to Moscow, where the guy continued his education at CSKA Football School. In 1999 Denis Glushakov was invited to the amateur club FC Nika Moscow, where he played until 2005. At that time, he was finally invited to FC Lokomotiv Moscow.

He was promised a place in a reserve team and Glushakov immediately agreed. Over the next two years, he regularly played in the reserve team Zheleznodorozhniki, and in 2007 he joined the Zvezda club on loan, and regularly played in its matches and scored 8 magnificent goals. After returning to Lokomotiv in 2008, he played in the match against Dynamo and scored his first goal for Lokomotiv in the game against FC Moscow in the Premier League. Glushakov was recognized as the best player of the match, and the coach officially transferred Denis to the first team. In 2011, the player extended the agreement with the club for 4,5 years. At the same time, Glushakov was named the Player of the Year.

In June 2013, Denis Glushakov signed a contract with the Spartak club, and he debuted in the match against Krylia Sovetov. The transfer of the player caused a lot of controversies and even led to the proceedings in the Court of Arbitration for Sport in Lausanne. He scored the first goal for the new team in the match against Zenit, finishing the game with winning score 4: 2.

In 2016, Denis Glushakov became captain of Spartak after voting of football players and coaches. The same year fans recognized him as the author of the most beautiful goal. Glushakov’s annual salary in Spartak was two million euros. Denis regularly gets on the lists of highest paid Russian football players in sports magazines and websites.

Despite the quickly developing sports career, unofficial victories and the recognition of the fans Glushakov still doesn’t have any trophies and titles. Fans have started to joke that the football player has an empty sideboard, where he wants to put cups and medals. Denis is very surprised by this rumor because he has never expressed such a desire. Of course, the captain of Spartak is ready to lead his team to the Championship, but he does not have any sideboard.

A few months before the World Cup Denis Glushakov got a very serious injury. Thus, his participation in the World Cup in Brazil for a long time was uncertain. Nevertheless, the player could get into condition and play in the match against South Korea, where Igor Denisov replaced him in the second half.

It is known that the match drew 1:1. The national team played against Belgium on June 22, and Glushakov got a yellow card.

In 2016, the player took part in seven European Championship qualifiers and joined the team during the Euro 2016 in France. Glushakov came on only in the 80th minute during the first match against England. When Denis was on the field, the Russian team scored a goal and finished the match with a draw (1: 1). The Russian players lost the second match against Slovakia, despite the fact that Glushakov also appeared at the end of the match and even scored a goal with his head.

Denis Glushakov is married, and he is very happy in marriage. Future spouses Denis and Darya have known each other since childhood because they lived on the neighboring streets in Millerovo. When they grew up, young people began interacting more often. In the end, they fell in love and decided to marry.

Having celebrated a lavish wedding, the husband and wife moved to Moscow. Soon the star couple had a charming daughter, Valeria. At the end of 2016, the family had another daughter. Glushakovs build a house for a large family in New Riga. Now the football player honestly admits that he also dreams about a son.

Denis and his wife Darya regularly visit their native town near Rostov. A football stadium was recently built with the participation of the couple in Millerovo. The football player has built the stadium with his own money. He has also created a children football team, and the player continues to develop and support it.

The press has compared Glushakov’s act with the scandal with Pavel Mamaev and Alexander Kokorin when journalists found them in an expensive nightclub after Euro 2016 failure. The fans were outraged that the players of the national team did not only take care of their health and sports fitness but even after failure and shame at the Championship they could afford themselves to rest as most of their fans could not even imagine. The question about overpaid Russian players was raised again.

Denis does not want to become famous because of his colleagues. He claims that the guys were just not lucky enough to meet the paparazzi. He is sure that football players have the right to relax after the season and quotes Capello who did not forbid his players to rest in bars. The football player does not like very much when paparazzi take pictures surreptitiously. Once he even threw the camera of one of the reporters, but he is always ready to sit and answer questions if journalists ask them in the open.

According to many people, Denis Glushakov has not turned his nose up when he became famous. He communicates with pleasure with fellow countrymen from Millerovo, enjoys the portrait gift from Irkutsk, has accounts on Instagram and Twitter. Fans like Glushakov very much for his will to victory, dedication, friendly relations with people and, of course, the brilliant game. The interview with fans has recently spread on the Internet, where one of the fans predicts without hesitation the Russian victory in one of the matches saying that Glushakov is a funeral (referring to the funeral of the enemy). Ambiguous nickname almost stuck with the player. Although he disowns any connection with it, he has communicated with the fan from the video and even invited the guy to his matches. 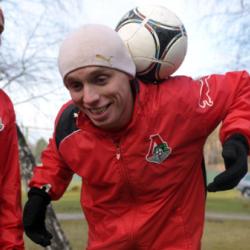