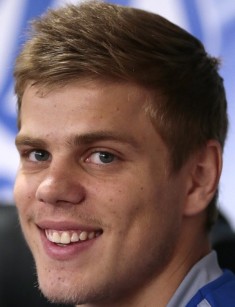 Alexander Kokorin was born on March 19, 1991 in Valuyki, Belgorod region. According to one of his childhood friends, Sasha always kicked something at school, and never left the ball in the yard. Even in the first class, a promising boy was noticed by the coach of the local sports school, who suggested Sasha to attend the football section. Later he was called to the Moscow club "Spartak". The boy liked the coaches, but the club did not have free accommodation. Fortunately, it was found in the school of the Lokomotiv, where Sasha lived for six years.

A ten-year-old boy was left alone in Moscow. Parents could visit him only once a quarter. Sasha learned to organize his life independently: he washed clothes and prepared food. A tiny scholarship was enough only for one visit to McDonald's, and every day the future star of Russian football had hard training. But there were friends around with similar fates, and ahead of them were football victories and glory. But even in his childhood, Alexander Kokorin was recognized as the best player in various football competitions between Moscow sports schools.

Before the 2008 season, 17-year-old Alexander Kokorin signed a three-year contract with the Moscow club "Dynamo". He made his debut in the Premier League of Russia in the game of the 24th round against Saturn (Moscow region). Kokorin scored a goal that brought the victory to Dynamo with a score 2: 1.

After the debut game against "Saturn" Sasha played in all the other six games of the season. In three rounds after the first goal followed another. It decided the outcome of the game against the "native" "Locomotive" - 1: 0. That first season brought "Dynamo" the third place in the championship, and the debutant was recognized as one of the best young scorers of the Russian football championship. In addition, he received the title of the best striker according to the results of the IV International junior tournament organized by the Belarusian Football Federation.

In the 2009 season he played in the second round of the Russian championship in the match against Khimki and scored a goal, which consolidated the victory of Dynamo. That year, the player played in 23 games of the Premier League and in three games of the Cup of Russia, but scored only 2 goals (the first against Khimki, the second against Spartak), receiving three yellow cards.

2010 turned out to be not very successful for Kokorin, because in 26 games for the "Dynamo" he never hit the gate of opponents. Despite the unsuccessful season, Alexander Kokorin interested the CSKA and Spartak clubs. Nevertheless, the player remained true to his club.

In the season 2011/2012 Alexander Kokorin first appeared on the field in the match of the 6th round against the Makhachkala "Anji". The goal scored by him allowed the Dynamo to settle the score and to avoid the defeat. In the championship, Kokorin scored four more goals. In addition, he twice managed to hit the opponent's gate in the Russian Cup, where Dynamo reached the final, but lost to Kazan Rubin with a score 0: 1. Alexander was named the best young player of the season in Russia, and in February 2011, "Dynamo" signed a new contract with him for 3.5 years.

In the new season Alexander Kokorin took part in the matches of the Europa League, where the talented footballer again showed himself as a good player. He scored one goal at the gate of "Dundee United", and the second at the German "Stuttgart".

The season in the home championship developed quite successfully. So, in the sixth round against Lokomotiv, Alexander Kokorin's goal brought Dynamo the first victory of the season. It is interesting that on September 22, 2012 the football player played his hundredth match in the Russian Premier League against the Permian "Amkar".

On July 3, 2013 Alexander Kokorin at the meeting with the directors of Dynamo unexpectedly announced his intention to move to Makhachkala's Anji. The transfer of the Russian champion was estimated at 19 million euro. However, "Dynamo" did not see the money. The owner of "Anji" Suleiman Kerimov announced changes in the financial policy of the club, which gradually began to sell expensive players, including those who came not very long ago. As a result, on August 16, 2013 Alexander Kokorin again returned to the Moscow "Dynamo", as well as Igor Denisov and Yuri Zhirkov.

Already on August 24 Kokorin appeared on the field in the form of "white and blue", replacing Feodor Smolov in the second half of the match against "Zenith". In September 2013, Alexander Kokorin strengthened his position in the club, scoring four goals and making two passes. Full dedication allowed Kokorin to become popular among fans of Dynamo again, who recognized him as the best player of the club.

In October 2011, Alexander Kokorin made his debut in the Russian team, playing in a friendly match against Greece. After leaving the national team for the Euro-2012, Alexander replaced one of the players in the first game against the Czech Republic. But was injured and didn’t appear on the field.

According to football experts, at the World Cup 2014, the attacking leader of the Russian national team could be Alexander Kokorin, who was ready for this. Most Russian fans associate their hopes for successful football attacks with him, especially after not very successful performance of Alexander Kerzhakov at Euro 2012.

With the beginning of participation in the Russia championships, Alexander Kokorin became a popular "hero" of the scandalous chronicle. He visited Moscow nightclubs quite often. Relations with Victoria - a cousin of rapper Timati attracted attention of the press. But soon Victoria went to study in London, and Sasha stayed in Moscow, where he met a girl Christina, with whom he went on vacation to the Maldives and the United Arab Emirates.

Christina went to Euro 2012 in Poland with Alexander Kokorin, but in autumn the couple broke up, and in winter Kokorin went to Miami with Pavel Mamaev. There were photos, where Kokorin and Mamaev hug and kiss. However, Alexander responded to the questions of with his sexual orientation, that he still loves his girlfriend Christina, and Pavel is like a brother to him. 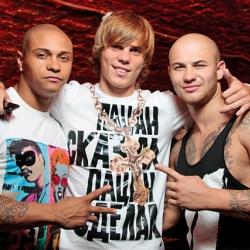