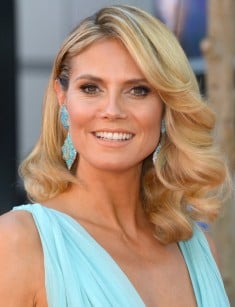 Heidi Klum is the German model, actress, TV presenter, producer, and scriptwriter. She appeared on the runway as the famous Victoria’s Secret angel and got to the popular glossy magazines Vogue and ELLE.

The would-be supermodel was born in June 1973 in Bergisch Gladbach, western Germany. The parents were somehow involved in the world of fashion: the mother was a hairdresser in a beauty salon, and the father represented a large cosmetics company.

At school, the girl decided she would become the runway star.

In 1992, 18-year-old Heidi Klum surpassed 25 thousand rivals and won the national model competition. She got the prize: the advantageous contract with a model agency and participation in a popular TV show.

At that moment, Klum was a student at a design college in Düsseldorf. It was impossible to combine studies and the modeling career. Heidi chose the latter.

In 1993, the young woman moved to the USA and started building her career; its peak took place in the late 1990s when a popular American tabloid with the circulation over 20 million posted her hot photo in a swimsuit. The legendary brand Victoria’s Secret offered her to become its angel, and the magazines Vogue and ELLE printed her pictures. It was nonsense: Heidi had never appeared on fashion shows in Paris or Milan.

After the model appeared in top magazines, McDonald’s offered her a contract: Klum advertised sweets for the company. Later, Taft, Douglas, and several shoe companies collaborated with her. It was the golden opportunity for Heidi Klum. She presented sweets, clothes collections, and jewelry under her name. In 2008, Forbes put her in the list of the richest models of the world (20th position). Three years later, Klum became number 39 in the top powerful women rating.

In France, a new species of roses was named after Heidi Klum. In 2009, German Vogue devoted the whole issue to the model.

Heidi Klum began her acting career with small roles in popular series: Sex and the City, Desperate Housewives, and so on. The model realized that she did not have to demonstrate perfect acting skills: she just needed to appear. The woman did not mind that. She was convinced she would gain the necessary experience after several projects so that she would get more significant roles in the future.

The model was right. In the popular sitcom Spin City, the creators invited Klum to play herself in the seventh season of the series.

More projects followed. In 2001, Heidi took part in the full-length movie Zoolander by Ben Stiller. The model took the roles in the sports comedy Blow Dry, melodrama CSI: Miami, and two documentaries about the fashion industry.

Each time, one or two movies with Heidi Klum come out. Although the model has not received the lead part yet, her secondary roles are associated with scandalous and almost iconic projects, for instance, The Devil Wears Prada, Ella Enchanted, and The Life and Death of Peter Sellers.

Millions of fans are eager to know what is going on in the model’s private life. They are not disappointed: Klum regularly gives ground to talk about her.

The woman has been married twice; she has four children.

The famous stylist and hairdresser Ric Pipino became the beauty’s first husband. They married in 1997 and spent five years together.

Heidi’s elder daughter was born in May 2004. Flavio Briatore was the girl’s biological father; Klum used to date him, but the Formula-1 manager cheated on pregnant Heidi with the jewelry successor Fiona Swarovski.

The German beauty did not get confused and accepted the courtship of the famous musician Seal. Eventually, they married, and Seal adopted the girl in December 2009. In a while, the couple’s three children were born: Henry Günther Ademola, Johan Riley, and Lou Sulola. In 2012, three years after the youngest child Lou was born, Seal and Heidi Klum divorced.

The same year, the model was dating her bodyguard Martin Kirsten. Two years later, they split up.

The art dealer Vito Schnabel became the next lover of the star. The relationship was developing fast; in summer 2016, Vito proposed to Heidi but faced the rejection. The photo model explained that her feelings for Schnabel were still warm, but she did not want to marry again, having the history of two unhappy marriages.

The overall relationship was not simple and perfect. The age gap probably contributed to that: Vito was 13 years younger than Klum.

According to journalists, the couple’s problems were rooted in the man’s affectionate nature that Heidi used to ignore until the last moment. For instance, the paparazzi saw Vito kissing an unknown brunette. It was not the first extradyadic affair, but the scandalous photos worsened the situation. Heidi and Vito had the so-called “challenging” period.

The three-year relationship was at the deadlock. Vito and Heidi started to live separately. In September 2017, the model commented on her break-up with Schnabel and emphasized she viewed that as the temporary state.

In November 2017, the model, as well as other celebrities, became the victim of hackers: they leaked her naked photos on the Internet. Unlike other stars whose home photo sessions were publicly revealed, Heidi had her professional photos taken from the photographer Rankin’s book stolen.

Heidi did not comment on that case. The model who is above 40 does not hesitate to show her body: she frequently posts her bikini photos on Instagram; sometimes, Klum publishes naked photos where the details are hidden by the angle.

Three days after the hackers’ attack, Heidi Klum shared the photos from her vacation on California beach. Soon, she appeared at the American Music Awards 2017 ceremony wearing a pink dress with a provocative plunging neckline that left no room for imagination.

Fans only welcomed Heidi’s provocative photos and dresses. The woman’s height is 177 cm., and her weight is 54 kg. She has an individual fitness program to keep fit.

In January 2018, journalists learned that Vito Schnabel and Heidi Klum were together again after a six-month break. The lovers made it up before New Year and spent holidays in Bali. They continue to be a couple now. Neither Heidi nor Vito made any comments about the new stage of their relationship.

Under these circumstances, the rumors about the model’s upcoming marriage appeared in the media at the beginning of 2018. Journalists noticed the ring that Heidi was wearing in the pictures; it looked like the engagement ring. The model did not try to hide it when she was being photographed. However, the rumors were not confirmed.

Another news followed soon: the model found an old and rate photo taken by Mario Sorrenti and posted it on her Instagram. It was the black-and-white picture where young Heidi was wearing a wet T-shirt with no lingerie. The model’s fans appreciated the photo and convinced her she looked as good as she used to. 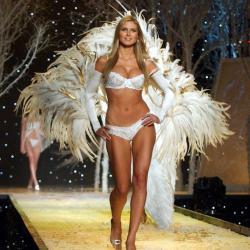