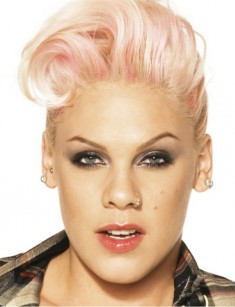 Pink is a popular American singer and songwriter. Her album "Can't Take Me Home" recorded by Pink in 2000 brought popularity to the singer. From this moment Pink became a regular at various charts and lists of popular performers.

Alecia Beth Moore is known to the most of us under her creative pseudonym Pink. She was born in the American town of Doylestown in September 1979. Here, in Pennsylvania, the future star spent her first childhood year. She had grown up and attended the school in the city of Doylestown.

Alecia's ancestors by her mother’s side were Jewish emigrants from Lithuania, Germany, and Ireland. Her father is the veteran of the Vietnamese war. Alecia and her brother Jason were brought up in Catholic traditions.

Pink discovered her musical abilities very early. By the way, the girl had got such a nickname for her improbable shyness because of which she constantly got embarrassed.

When studying at the elementary school the girl decided to become a rock singer. Probably, her father contributed to this decision, because he played the guitar very well and often accompanied the singing of his little daughter.

When Pink had grown up a little, she already had her musical preferences and authorities. She had grown up on the songs of Janis Joplin, Whitney Houston, Billy Joel and Madonna. The girl loved the last singer so much that at the definite period of time the girl was even sure that Louise Ciccone was her real mother.

In youth, Pink sang well, but also she successfully wrote lyrics. For the first time, the girl appeared on the stage at the age of 14. It happened in one of Philadelphia’s clubs.

At the age of 16, the young singer together with two colleagues Sharon Flanagan and Chrissie Conway created the musical band of "Choice". Girls sang in R&B style. They considered one of their compositions under the title "Key to My Heart" rather successful and sent it to "La Face Records" recording studio. The song was highly appreciated and the recording studio concluded the contract with the girls.

Soon her debut CD under the name of "Choice" was released. But three years later the band broke up. Alecia decided to begin her solo career. The singer continued her career, having taken the school nickname "Pink" and having made it her creative pseudonym. At first, she was singing along to the stars, but soon she recorded her first single under the title "There You Go" performed in the same R&B style.

In 2000 she recorded her solo album which included the above-mentioned song.

A year later Pink recorded her second album, but not in habitual R&B style – it was pop-rock style. The third CD called "Try This" was released in 2003. It appeared to be less successful from the commercial point of view, than the two previous albums. Nevertheless, Pink was awarded by Grammy prize for one of the singles from this album.

The cinematic biography of Pink was taking off promptly too. In 2000 the singer had her debut in the movie "Ski To The Max". Pink appeared in a cameo role. In 2 years she played the rock singer in the movie "Rollerball". In a year she performed in the second part of "Charlie's Angels".

Her following two albums were released between 2006 and 2008. These albums received the names "I'm Not Dead" and "Funhouse". The "Billboard" magazine called the singer the best-known pop artist from 2000 till 2010. Her 5th album was extremely popular. In the USA Pink’s album, "Funhouse" was sold out in 2 million circulations. Seven millions more copies were sold all around the world.

In 2012 the singer released her new CD "The Truth About Love". The song "Blow Me (One Last Kiss)" became the leading composition of the album. In the U.S. the single reached the 5th position in the well-known HOT 100 of popular compositions, and in Hungary and Australia, this track headed the national charts. The album received the leading place in "Billboard 200" rating and also became first singer’s album which managed to head the American top. Also, this CD became the sixth most sold album in the world.

Singles of the album also achieved success. The composition under the title "Try" received the 9th line in the "Billboard Hot 100" list and became the world-class hit. The third single of the released album called "Just Give Me a Reason" was recorded in a duet with Nate Ryuss. This composition also won international recognition.

In support of her new album, the singer held concerts within the tour with the accordant name "The Truth About Love Tour". This tour had taken the third place among the most successful and sold tours of this year. Besides, Alecia was called "Woman of the Year", by "Billboard "rating.

In 2014 the singer became a part of the duet with Dallas Greene, the soloist of "City And Colour" group. Popular musicians organized the new duet under the intriguing name "You+Me". Under this name, Alecia and Dallas recorded the album "Rose Ave".

In 2015 the singer presented her composition "Today's The Day" which she composed especially for the well-known "The Ellen DeGeneres Show" American talk- show. The singer performed with this song at the first broadcast of the new season.

Pink is a vegetarian and she has an ethic attitude towards animals. The singer had many conflicts with celebrities because of her views. The actress had publicly criticized fox hunting of which Prince William is fond. And she also sent an angry letter to the Queen of England. Pink urged the Queen to abolish traditional bear busbies of guardsmen of the Honorable artillery company. Pink also reproached her colleague Beyonce for her love for natural fur.

Pink got acquainted with her future husband Carey Hart on the motorcycle races. Their love for motorcycles appeared to be mutual. For the first time, Alecia had tried to ride a motorbike when she was 2 years old. Later, when she had become a famous star, Pink could be seen on her Harley-Davidson more than once, even on the Awards ceremonies.

In 2005 the singer appeared at the motocross races. Carey Hart was going to take part in it, and she herself made him a proposal. Alecia had done this in a rather extravagant way: she was holding in her arms a placard. On the one side she asked her beloved whether he married her, and on the second she admitted that it wasn’t a joke.

This eccentric and bold couple celebrated their wedding in 2006 in Costa Rica. But Pink’s personal life wasn’t ideal. Three years later the spouses separated but there was no official divorce. In 2009 the fans of the singer were happy with the news that Pink and Hart reunited. In summer of 2011 of the spouses shared their joyful news: Pink gave birth to their daughter called Willow Sage Hart.

In 2015 the things returned back. In media, there was information about the couple’s break-up. It is said, that Alecia and Carey had sold their house in Malibu. The singer even said that she wasn't going to give birth to children from Hart anymore because he was a child himself.

Nevertheless, there was no official statement for their parting. Moreover, in December 2016 one more child was born in their family. This time it was a son, called Jameson Moon Hart.

In 2016 Pink presented her composition called "Just Like Fire". The star of pop music composed this track especially as a soundtrack for the new fantasy blockbuster "Alice Through the Looking Glass". A month after the release of this single she presented the song video. The composition took the 10th position in the national top chart in the USA. But the track was successful in other countries of the world as well: in general, sales of the track in the world reached two million copies.

The same year 2016 the singer composed one more new song, but not for herself this time. The composition called "Recovering" was performed by Celine Dion. The new song of Pink became a promo-track of an English-language CD of Celine Dion. Celine Dion was completely satisfied with this track. She openly told the press about her impressions, and, moreover, she called herself a fan of Pink.

In 2017 Alecia recorded and presented her seventh album. This album was released under the title of "Beautiful Trauma". The song "What About Us" became the header composition of the new disc.

The listeners had quickly fallen in love with this album. The disc managed to gain the first lines in the top charts of the USA, Great Britain, and other countries. This CD also received positive reviews of the critics of prestigious specialized editions. In such a way, this album became the second CD which headed the ratings in Pink's creative biography. In Australia, this album became platinum twice. 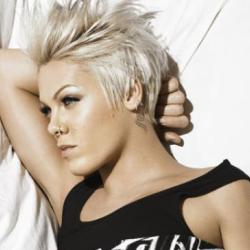