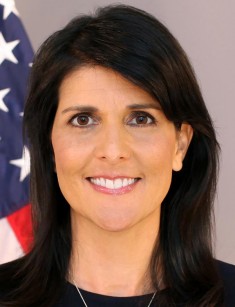 Nikki Haley - the main opponent of the Russian diplomats in the UN Security Council had got into funny situations more than once. But, as well as any other diplomat, the woman manages to find a successful way out. Female charm helps American politic to perform as equals with the opponents in the world of male politicians.

The biography of the United States Ambassador to the United Nations - Nikki Haley began in South Carolina. Here she was born on the 20th if January 1972 in Sikh family. The parents of the future politician immigrated to the country from the Indian state of Punjab.

Mrs. Haley is not a pure-blooded American. Besides, the real name of the woman is Nimrata, and her surname in the maidenhood was Randhawa. Since childhood in the family the daughter was called by the tender second name – Nikki, subsequently, it also became habitual for the politician.

The family of Randhawa is rather big. Except for Nikki, her parents brought up two sons and one more daughter. The girl got an excellent education, having graduated from Orangeburg Preparatory Schools which was training graduates for the college. After that, the girl received Bachelor’s degree in accounting at Clemson University.

The graduate got a job in the recycling company. Having worked here for several years and gained experience, the girl decided to change her work and to occupy the position of the commercial director at her mother’s firm, which was producing clothes of the highest quality.

Soon the small family company had grown considerably and began to bring great profit. Since 1998 Nikki Haley's career in the economic sphere began to take off.

Nikki as a commercial director was named to the board of directors of the Orangeburg County first and then of Lexington. In 2004 she became the president of the National Association of Women Business Owners.

Besides her enterprise activity and business, she devotes time to public work and charity. Moreover, she supports medical and sheriff funds.

Haley made her first steps on the political arena in 2004 when the woman was elected to the House of Representatives of her native state. Further, she was successfully re-elected to this position twice, bypassing her rivals by the results of the voting.

Nikki Haley is a representative of the USA Republican Party. She was a secretary of the committees regulating medical, military, state and municipal spheres in the House of Representatives of South Carolina.

Being a politician, the American woman of Indian origin resolutely opposes to the abortions. The woman considers that even an unborn child already has right for life. For that reason, she voted and supported projects against pregnancy termination.

Nikki is a supporter of the bill in accordance with which after ultrasound diagnosing impregnation, a woman can decide on the preservation or termination of pregnancy only 24 hours later. In this way, the woman has an opportunity to think over her decision.

Moreover, Nikki is the author of the idea of the new principle of compensation of school teachers. In her opinion, the payment should be focused not only on teacher’s experience and qualification but also on the system of job evaluation by the pupils, parents and the heads of the educational institution.

In 2010 she proposed her candidature for the position of the Governor of South Carolina and she again defeated her rivals –democrats in voting. In 2014 she was again elected to this post. In 2016 the American politic was honored with the offer from Donald Trump to take a position of the United States Ambassador to the United Nations. At the end of January 2017, Haley's candidature was approved by the Senate almost unanimously.

Being the ambassador in the UN Security Council, the woman speaks out against world policy of Russian Federation. Her negative attitude towards Russia and the president of the country V.V. Putin is absolutely obvious in each speech of the permanent representative.

Public debates and confrontations had begun in the UN Security Council between Haley and the permanent representative of Russian Federation in the UN - Vitaly Churkin and continued after the appointment of Vasily Nebenzya. The Russian party, including the Minister of Foreign Affairs of the Russian Federation - Lavrov, reasonably consider Haley to be a Russophobe.

While making the statements concerning the position of the USA in strategic questions of world policy, Haley quite often makes mistakes. This can be explained by insufficient evidential base on the charges. In most cases, the claims of the country are directed towards Russian Federation which supports Assad's regime in Syria. Besides, Nikki Haley made sharp statements about the situation in Ukraine and inaction of the UN during the invasion of Russia on the territory of Crimea. Besides Russian Federation, her confrontation is directed towards DPRK.

Since September 1996 the woman is happy in the marriage with her spouse Michael Haley. The politician's husband is an officer in the South Carolina Army National Guard.

It’s noteworthy that Nikki Haley doesn't forget about her Sikh roots and treats the religion of her parents with respect. Nikki identifies herself as a Christian, nevertheless she honors Sikh ceremonies and traditions. The wedding ceremony of spouses was held in traditions of both religions. The couple has two children – a daughter Rena and a son Nalin.

The appearance of the woman obviously demonstrates that she has Indian blood. Nikki Haley is pleasant and smiling American woman of average build (a politician is 173 cm high and she weighs 60 kilos). Looking at this woman, you can hardly imagine that she can be engaged in ardent political disputes.

The politician is an active user of social networks. On her official pages on Instagram, Twitter and Facebook there regularly appear photos and videos containing Haley's interviews and speeches.

In 2018 Haley continues to represent her country at the United Nations Council, promoting the position of the authorities in world questions.

In April 2018 Haley made the statement about the introduction of the next set of sanctions, directed against the Russian Federation in connection with a situation in Syria.

At the same time, the president of the United States expressed an opposite position concerning the fact that the country would abstain from the imposition of restrictions. The Cabinet Minister of the president noted the unauthenticity of the information stated at the world tribune.

Haley wasn’t confused and admitted her confidence in the stated position. But later, in the interview, the woman confessed that she was misled by her assistant. Though, such careless statements, are quite serious and have consequences. Next time in such a situation Haley can be dismissed.

State Department of the USA stands up for the fact that information which gets to the UN should correspond to the line of country's policy. That’s why the State Department indignantly made a proposal on the obligatory preliminary discussion and coordination of all the speeches of the ambassador. By the way, Donald Trump sometime later after the appointment of the politician to the post dared to joke that if Haley left her post he wouldn’t regret it.

There was a funny situation with Haley at the end of 2017 when the record of the telephone conversation of the permanent representative and prankers Vovan and Lexus appeared on the web. Internet humorists contacted the politician, having presented as Polish prime minister.

With utmost seriousness young people had taken interest in the position of the United States concerning the island of Binomo and fight for the independence of its citizens. Haley wasn’t puzzled and assured them that the USA was aware of the events and took control of the situation. The problem was that there was no such island on the world map. And it was obvious, that Haley didn't know it.

Also, the media was actively discussing a friendly welcome kiss of Vasily Nebenzya and Nikki Haley which was captured by the reporters and published. Nebenzya commented on this saying that, despite ardent diplomatic disputes, political opponents have very friendly relations. 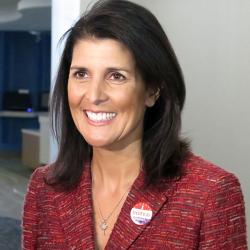