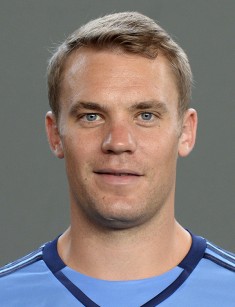 Manuel Neuer plays as a goalkeeper of "Bayern" and the Germany national team. Regarded by pundits as the best goalkeeper in the world. He is often compared to the legendary Lev Yashin.

Since childhood, the boy's life was connected with football. At the age of two, he began interested in this kind of sport. When Manuel was not five years old, he went to the football field for the first time. It was Manuel’s father, who showed his son the world of football. He worked as a policeman, and the local football stadium was under his protection. There, the football club “Schalke 04” was located. From the very beginning, the boy played as a goalkeeper.

The Gesamtschule Berger Feld High School, which Manu graduated from, as well as his elder brother Marseille, is famous for its famous alumni. The main direction of the educational institution is sports. The school closely cooperates with the football club "Schalke 04". By the way, Manuel’s brother Marcel also chose football career and works as a referee.

In addition to football, Neuer played tennis up to 14 years. But even now the football player is a member of the tennis club in his native city.

It is impossible to talk about the biography of the goalkeeper without mentioning football. Undoubtedly, the sport takes the central place in the life of the young man. As the sportsman's brother recalled, since childhood there was only school and football in the life of Manu. After school, there was more time left for football.

In 2005, Neuer signed a contract after progressing through every age group at his hometown club, Schalke 04. But he didn’t play as the main goalkeeper from the very beginning. Neuer spent the season on the bench. However, in 2006-2007, the club's first goalkeeper Frank Rost was injured, and the young goalkeeper replaced him. Neuer used the chance to show his talents.

Soon after the debut, the gates of the club remained under his protection. The coach was impressed with the game of the goalkeeper when they played against "Bayern." The game was finished in a draw.

The following seasons were no less significant in the goalkeeper's career. In 2008, the player was included in the shortlist for the title of the best goalkeeper of the UEFA. Manu was the youngest and the only contender from “Bundesliga.”

It's no surprise that the representatives of the "Bayern" club began interested in a promising sportsman. The management of "Schalke" managed to hold the goalkeeper in the team for a while. But in 2011, the goalkeeper refused to renew the contract, despite the beliefs and promises to raise fees.

The footballer spent 20 years in the club, and it was not an easy choice to leave it. What is more, the fans of the "Bayern" were against the new goalkeeper. The Munich fans wanted to see only Thomas Kraft.

During the games there were offensive posters; fans throw beer glasses and other garbage at him. Moreover, the goalkeeper missed a single goal, which became victorious in his debut match for the club. The captain of "Bayern" addressed to the fans, and the club management apologized to the football player for the behavior of the fans.

The rising star ignored the protests and continued to stand at the gates of the club. Manuel managed to play 1147 minutes without missing balls in the first season. And the hearts of the fans melted.

In the season 2012-2013, thanks to the brilliant game, "Bayern" won four trophies: the Cup of the Bundesliga, the German Cup, the German Super Cup and the Champions League Cup. This triumph was for the first time since the club's existence. The following season brought Manu the title of the goalkeeper of the year. The club extended the contract with the player until 2019.

Manuel has a height of 193 cm and a weight of 92 kg. Fans call him is "sweeper-keeper.” Often the goalkeeper goes far beyond the goal line, throwing the ball to the middle of the field. This style of play is quite risky for the goalkeeper, but Neuer brings only positive results. He often trains as a field player, and teammates are sure that the place of the goalkeeper is not the limit for the talented Manu.

For a long time, the footballer was in a romantic relationship with Kathrin Gilch. However, in summer 2014, Manu met Nina Weiss, a student at the University of Berlin. According to the press, Neuer broke up with Kathrin because of a new girlfriend.

On Christmas Eve 2017, the young man made an offer to his future wife in his villa in Bavaria. In June 2017, in the Italian Monopoli, the young couple celebrated the wedding. More than a hundred guests were invited to the party. The goalkeeper went to the altar with crutches because of the injury.

As a Catholic, Manu participates in charitable programs. In 2010, the footballer started a charity foundation for children.

The football star has hobbies- billiards, darts and table tennis. Manu loves to sing. He and his brother often go to karaoke. The goalkeeper is riding a motorbike. Neuer prefers this type of transport in good weather. Manuel also plays cards.

The previous season 2016-2017 became unsuccessful for the goalkeeper. In the ¼ Champions League match, Neuer broke his left leg. The injury removed the player from the field until the end of the season. Recovering from the fracture, the athlete went to the gate. Unfortunately, not for long. Having played only three games, the football player broke his left leg again during the training.

Manuel didn’t play until 2018. The World Cup is waiting for the goalkeeper of the Germany national team. At the end of March, there appeared photos of the football player from the training on the "Instagram." 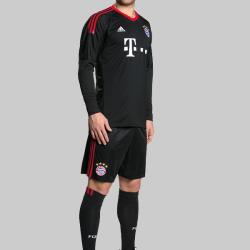