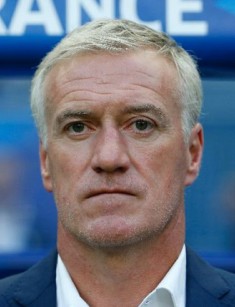 The current coach of the French national team Didier Deschamps belongs to the "golden" generation of football players of this country. In 1998 the national team for the first time won FIFA World Cup, and two years later they became the winners of UEFA European Championship. The idols of modern football players - Zinedine Zidane and Marcel Desailly appeared on the field, Fabien Barthez was the goalkeeper, and the midfielder Deschamps was their captain.

The legendary player also helped to win trophies to the clubs for which he had been playing. In 2001 the sportsman changed his career as the football player and became the coach. Since 2012 he headed the coaching staff of the French national team.

The future star of French football was born on the 15th of October, 1968 in the southwest of the country, in Bayonne. This small town with the population of no more than 50 thousand people is situated on the borderline with Spain and is known as the center of Basques’ culture. The ancestors of Didier Deschamps both on his father's and mother’s side originated from this nation. The sportsman repeatedly said in his interviews that he was proud of the fact that he belonged to Basques.

The young man got fancy for the sport since early childhood. However, Didier began with rugby – his father motivated him to start this. In his youth, Didier's father tried to do his best in this kind of competitions, but unfortunately, he hadn't realized himself in this. Soon his son gave up this section: the young man had no endurance and strength, unlike his rivals. But the boy was getting interested in football.

In school years Deschamps was training in the city club of "Bayonne". Even though this section opened in 1935, the team took part only in amateur tournaments. At one of the championships, there were present the scouts of Nantes F.C. who became interested in the 14-year-old boy.

Soon Didier concluded his first contract and started his brilliant career. His victory in the World Cup in his home country began one of the steps in his career. After this, the stadium in his native Bayonne got another name. At present, the football club where Deschamps had been studying and took his first steps bears his name.

The young man had been training for two years in the academy of FC Nantes which is considered to be the strongest one in the country. In 1985 Deschamps had played a debut match in Ligue 1 Conforama. In 1989 the 20-year-old midfielder left football club and transferred to Olympique de Marseille for which he had played for one season only. But even in his third team of Bordeaux F.C. Deschamps hadn’t stayed for a long time. In 1991 he again started playing for Olympique de Marseille and achieved remarkable results.

At first, the team with Deschamps as its part won Ligue 1 for the fourth time in a row and the seventh for all history of the club. Two years later Marseille FC defended its title. And in 1993 the French club won Champions League Cup for the first time in the history of the country. Deschamps set the record: at the age of 24, he became the youngest captain whose team won this tournament.

Juventus F.C. got interested in the champion. In 1994 Deschamps transferred to Torino football club. The midfielder was at the peak of his career during the five-year period of playing in Juventus team. The team became a three-time winner of the national championship, won Italy Cup (1995) and Italian Supercup (1995, 1997). And in 1996 Juventus football club tried to get the European triumph and at first won the title of the winner of Champions League, and then of UEFA Super Cup.

Deschamps, who joined the national team in 1989 became its captain. The football player never claimed on the glory of the goal-scorer: during his club career, he scored only 19 goals and four goals for the national team. By the words of his predecessor, the ex-captain of the national team Eric Cantona, Didier carried the functions of "the water boy" and got the ball for the forwards.

This strategy brought the French team to the final of FIFA World Cup where Brazilians became their rivals. Ronaldo, Cafu, Roberto Carlos appeared in one team, Stéphane Guivarc'h, Zidane, and Deschamps – in another. Already in the first halftime after Zidane's double the hosts of the tournament went ahead. During the break, preceding the trainer, Deschamps appealed to his team not to take a break and not to lean back.

The ball scored by Emmanuel Petit during the last minutes of the match became the last straw in the last hopes of the Brazilians in their victory. The tremendous success of the French national team turned the final game of the championship into the national sensation and the team players into the stars of world football. Hardly anyone was surprised when two years later the national team with almost the same structure also won at UEFA European Championship.

Deschamps who had achieved the peak of his career began to think of finishing it. Except for his victory in the European tournament he had spent a season in Chelsea F.C. which won FA Cup. The football player chose Valencia F.C. as his final working space. During the season of 2000-2001 Didier Deschamps had held only eight games in Spanish La Liga and declared the end of his career as a player.

The former football player began to work as a coach several months later in AS Monaco FC. There was no brilliant debut: after the first year of Deschamps’s coaching the team was on the verge of leaving the National League. The direction of the club decided to give a second chance to the beginning coach. And a year later AS Monaco FC won the National Championship and in 2004 reached the final of the Champions League.

During the season of 2006/2007, Deschamps was training Juventus team. The team which was affected by the consequences of the corruption scandal is on the verge of collapse. As a form of punishment, the club was transferred from the series A to the series B. As a result; the most influential players left this team. Deschamps managed to return Juventus the right to play in the first series of the tournament just in a year: the team won 28 of 42 matches. But the coach left the club because of the conflicts concerning the transfer policy.

In 2012 Didier Deschamps replaced Laurent Blanc in the post of the head coach of the national team. Under his coaching, the French team reached one-fourth of 2014 FIFA World Cup and lost to the team of Germany. Two years later, during UEFA European championship in his homeland, Deschamps brought his team to the final where the national team conceded the title to Portugal.

Didier Deschamps is married. Together with his spouse, Claude, they brought up their son Dylan who was born in 1996.

The coach prefers not to tell the journalists about his family.

The former football player is 174 cm high, and he weighs 72 kilos. The sportsman doesn’t have an account on Instagram.

The following Deschamps's statement is known:

"The trainer is responsible for 90% of defeats but celebrates just 10% of victories".

The coach of the French national team has commented on this statement and said that his task is to influence the mindset of the players and to take them through difficulties with a cool head. Deschamps also follows this principle at 2018 FIFA World Cup. He prioritizes psychologically comfortable climate in the team for the sake of which he is ready to refuse including of the professionals involved in the scandals with fights to the national team.

The national team under the coaching of Deschamps has successfully played at FIFA World Cup 2018. The football players have won the permit to the playoffs by the results of the first two winning matches.

As a football player 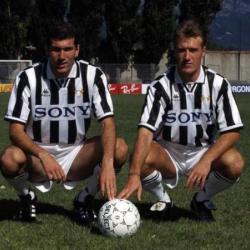