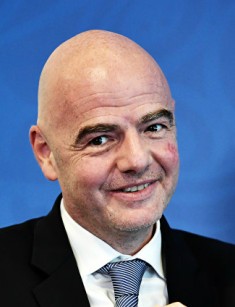 FIFA World Cup 2026 will take place in three countries, and 48 national teams instead of the usual 32 teams will participate. It is the new President of FIFA who has introduced these novelties as well as other changes.

Infantino became the President of FIFA in 2016 and announced that popularization and development of soccer in all continents (except for Antarctica) was the priority. Today, reforms are being implemented.

Giovanni Vincenzo Infantino was born on March 23, 1970, in the southern part of Switzerland, in Brig. His ancestors from the father’s line were Italian. Giovanni’s father used to live in Reggio Calabria and later moved to Switzerland to start his own business. However, the trade was not very good. When Gianni finished school, his parents could not pay for his education; the young man had to work on a railway to collect the necessary money.

Infantino liked soccer, but he had no outstanding talents and chose jurisprudence as a career. Giovanni graduated from the University of Fribourg as a lawyer. It is interesting that René Fasel who is the President of the International Ice Hockey Federation also graduated from this university.

Infantino’s career has never gone far from soccer. He started working at national soccer organizations in Europe as a legal adviser. In the late 1990s, he was appointed the Secretary General of the International Center for Sports Studies in Switzerland.

At the turn of the century, Infantino joined the UEFA apparatus, and he became Deputy General Secretary of UEFA in 2007. In October 2009, Infantino was the Secretary General of UEFA.

In summer 2015, FIFA was undergoing a corruption scandal. Before the organization presidential elections, several high-ranked bureaucrats were arrested: according to the investigation theory, they could have received the bribe from the countries who wanted to host future tournaments. As a result, Joseph Blatter resigned after the elections, and FIFA had to have the special election.

At the end of summer, the committee to reform FIFA was formed. Gianni Infantino was one of its members. Michel Platini was the first candidate from UEFA, but the investigation pointed out he might be connected with corruption-related crimes, and Platini withdrew the candidacy. Under these circumstances, UEFA proposed Infantino who emphasized the global changes in FIFA functioning as the fundament of his pre-electoral program.

First of all, he suggested the FIFA presidential term should be reduced to 12 years for the same person. Then, Infantino offered to enlarge the number of national teams who could take part in the championship to 40. The third novelty pertained to the sports grounds where World Cup would be held: rather than a single country, it should be a whole region where several countries would be included. The fourth measure was about introducing more new technologies to provide justice.

Besides, Infantino offered to increase donations to continental confederations that wanted to develop soccer. There was even a hint of romanticism: it was proposed to create the team consisting of FIFA legends. The team of FIFA stars could have charity matches and attract new fans.

Infantino managed to win the majority of votes. At the end of February 2016, 115 voters from 207 chose Gianni Infantino.

Throughout Infantino’s presidency, many innovations have been introduced, particularly, the video replays that are supposed to help referees. Now, FIFA’s primary task is to minimize the time spent on organization and assessment of fragments. The second innovation touches upon the hosts: The World Cup 2026 will take place in Mexico, US, and Canada. The group stage will include 16, not 8, sections where three teams will compete for a play-off.

In 2017, Infantino had to solve the problem with Messi’s disqualification for four games. The Argentinian player was punished after the argument with the referee’s assistant. Diego Maradona himself asked Infantino to take care of the issue. Later, the President of FIFA called Messi “the extraordinary player.”

During the doping scandal related to Russian sportsmen, the bureaucrat’s position was firm: he underlined that actions and conclusions of the International Olympic Committee did not influence the participation of Russia at the FIFA World Cup since FIFA had its reliable and independent practice of checking players for doping.

Infantino supports Russia. After the FIFA Confederations Cup, he emphasized the high level of organization the country demonstrated. He was happy with volunteers’ and audience’s activity and lack of racial prejudice and hooliganism. At this championship, the new system of video replays was tested.

Gianni is married; his wife Leena Al Ashqar has Lebanese roots. There are four children in their family. In 2016, Infantino registered on Instagram and Twitter but later neglected them.

Before Gianni was elected the President of FIFA, Eurosport.ru published the article where it was suggested Infantino had Armenian roots. Infantino himself denied these rumors. He has double citizenship in Switzerland and Italy.

Infantino used to say he supported Inter, but now he has to avoid answering such questions.

The information about the earnings of the President of FIFA is open: Infantino receives CHF 1.5 million annually. Besides, he can use the official car and apartment. The annual earnings of Fatma Samoura, the Secretary General of FIFA, is not much lower: CHF 1.3 million.

The President of FIFA was present at the opening match of the World Cup 2018. During the game, he sat between the leaders of the countries whose national teams were competing at that moment: the Russian President Vladimir Putin and the Crown Prince of Saudi Arabia Mohammad Bin Salman Al Saud.

When the last group stage match took place, Infantino and Putin opened the soccer park in Moscow. The President of FIFA said the championship changed people’s views on Russia that had been created by the western propaganda and local media. 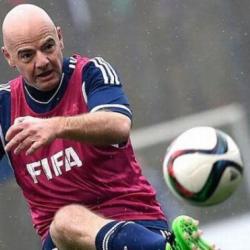