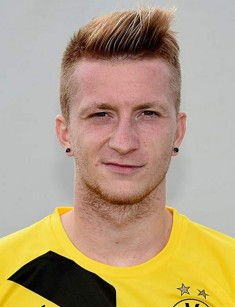 The path to success for German footballer Marco Reus was difficult and thorny. For a long time, he fought hard for the right to be in big football. The efforts were not in vain because nowadays a lot of clubs are dreaming of getting the player, but Marco remains faithful to his native team. The main advantage of the player is the excellent ball control, dribbling and kicking with both feet.

Marco Reus was born on May 31, 1989, in the city of Dortmund (Germany). The father of the football player was a locksmith, and his mother worked as an office clerk. Marco and his two elder sisters grew up in a modest family.

Since childhood, Reus has been fond of football. The boy started playing at the age of 4. The training helped Reus to abstract his mind from the everyday routine in the family with low income. Initially, he planned to become a salesman or a pilot but finally decided on a football career. From childhood, Reus’s idol was Czech midfielder Tomáš Rosický.

From an early age, his father coached the boy, and Marco's first professional coach was Pierre-André Schürmann from Dortmund.

Marco started playing in his hometown clubs. Until the age of 14, he trained in Post SV Dortmund, then moved to the leading club of the city Borussia Dortmund. At the age of 17, he left for Rot Weiss Ahlen to get a game practice. Marco was able to break into the first team. He debuted for the team in the Regionalliga home game against teammates from Rot-Weiß Oberhausen on September 29, 2007.

In the first season, he played 16 games, scoring one goal, which helped the team be promoted to the 2. Bundesliga. In May 2009, the player signed a contract with Borussia Mönchengladbach. In August 2009, Marco already made his debut in the Bundesliga guest match against Bochum.

Reus had the remarkable start of the 2011/2012 season. He demonstrated a productive game in every match, and his team had the best results in the standings. The reason for success was the duo of Reus and Hermann.

The player’s qualitative game attracted the attention of the world-famous clubs: Bayern, Chelsea, Manchester City and others. But Marco chose his hometown team Borussia Dortmund among all proposals and on January 4, 2012, signed a contract for five years.

He scored a goal in the first match against Werder Bremen, and the game ended with the 2: 1 victory of Borussia Dortmund. In September, the Dortmund team played against Reus’s former club Borussia Mönchengladbach.

Marco’s team completed a 5: 0 win and the footballer scored two goals. In the Champions League, Borussia was in a difficult group with Real Madrid, Ajax and Manchester City. But Marco scored goals in each game, and Borussia had the 1st place in the group.

Football player scored a hat-trick on February 16, 2013, in the game against Eintracht Frankfurt. On April 9 of the same year, there was the second leg game against Malaga. Since the first match ended in a draw, Borussia needed a victory, but they missed a ball in the 25th minute. 15 minutes later, Getz passed a ball to Reus from the right wing, and the latter managed to pass Robert Lewandowski who beat the opponent’s goalkeeper in one on one. Borussia ended this match with the enchanting victory.

Before the 2013/2014 season, Mario Götze moved to the opponent club, and the journalists wrote about Marco’s transfer either to Bayern or Barcelona. In the first half of the season, Reus could not show good performance, and he did not convert a lot of opportunities. However, Marco consolidated his position as the leader of the team.

Borussia won 4–2 against Zenit Saint Petersburg in the first leg of the round of 16 in the UEFA Champions League. Reus became the best player of the match. February 10, 2015, Marco extended the contract with Borussia for four years. It is known that under this contract the salary of the midfielder is € 10 million.

As for the international career, Marco played for the German national youth team. On August 11, 2009, he made his debut in the match against Turkey. In May 2010, the player earned his first call-up to the senior team. He played in the games against Turkey and Belgium. In 2012 he played at the UEFA Euro, scored a goal in the quarterfinals against Greece. After the UEFA Euro, Marco joined the German national football team. He participated in the FIFA World Cup in Brazil, but in the last friendly match was injured and forced to withdraw.

The young football player continually attracts the attention of girls. But Marco tries to hide his private life from the public eyes. Nevertheless, it is known that the football player dated the girl, Carolin, from Dortmund for a long time. People thought that they had stable relationships, but in 2013 they ended a love affair. Neither the girl nor the footballer commented on their relationship in an interview.

At the end of 2015, it became known that Marco began dating German model Scarlett Gartmann. The couple is together until now. As for Scarlett, she is an animal advocate, against fur products and very fond of horses.

Injuries sometimes overshadow the midfielder's achievements that prevent him from playing games for a long time. Gartmann supports her beloved man during such difficult times.

For example, in the winter of 2018, Marco recovered after the posterior cruciate ligament injury of the right knee, and the girl did her best to support the player. She does not hesitate to admire Marco at the stadium, sometimes even running on the field to share with him the joy of the scored goal.

At the end of June, it transpired that Marco Reus could continue the football career in Manchester City because coach Josep Guardiola wants to see the German in the team. However, in March 2018, Reus extended the contract with Borussia until 2023, but the coach and sports director of Manchester City want to persuade the Citizens owner to outbid Reus's contract.

In the summer, Marco has played in the German national team at the 2018 FIFA World Cup in Russia. Unfortunately, Germany, the defending champion, exited the group stage, which shocked the German fans.

Marco Reus has an official account on the social network Instagram, where he regularly posts photos and videos about his life.

As for the hobbies of the left midfielder, Marco likes playing table tennis and listening to music, most often R&B and hip-hop. Besides, Reus worked with Hot Wheels design to create a small car, which became very famous. The vehicle was called MR11. It is the player’s initials and number. As for the coloring of the car, it resembles Borussia’s colors.

There is an interesting fact that in 2016, Marco Reus wasn the face of the FIFA-2017 football game.

The player’s height is 180 cm, and the weight is about 70 kg. The number of the player in Borussia is 11, and he was nicknamed Woody as they found similarities in the head movement of the German and the cartoon character, Woody Woodpecker. 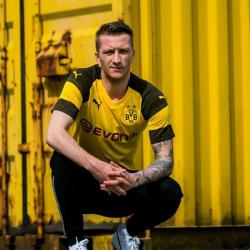