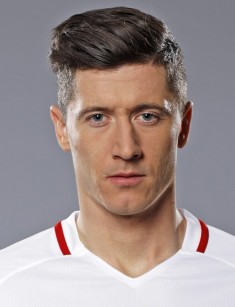 Robert Lewandowski is known as the author of rare and a little bit improbable phenomenon in football called penta-trick. The Polish football player wasn’t a pioneer in this movement. Dimitar Berbatov, Cristiano Ronaldo, Lionel Messi also tried to achieve the same success. Another matter is that Robert had scored five goals for 9 minutes, having set this way a record time.

One of the best forwards was born in Warsaw in August 1988. Robert descended from the family of athletes: his father Christoph is the champion of Poland in judo, his mother Yvonne was a professional volleyball player. His sister was also fond of this kind of sport. She was a cheerleader for the U-21 football team. Indeed, the boy was destined to have a sports career.

However, Robert didn't demonstrate any abilities at football section where his parents had taken him. Due to Lewandowski’s persistence and attendance of additional classes, his career began to take off. Just a year later his coaches could hardly tell that the guy had no horizons.

At the beginning of his career, Lewandowski joined Partizan F.C. from Leszno. His family moved to this city after his father had got a job there. Then Robert transferred to Delta Warsaw F.C.; later he had played for some time for Legia Warsaw II. Playing for Znicz, he had shown good statistics – he had scored 36 goals for 62 matches. Due to such excellent results, the football clubs of the Premiership of the country paid attention to him.

As a result, in 2008 being in the status of "Breakthrough of the year," he signed the contract with Lech Poznań F.C. Being a part of this football club he had played for two seasons, and I won the Cup and Supercup of Poland and also the National Championship. Moreover, the young football player became the second in the National Championship by the quantity of scored goals. During next season the goal-scorer already chose where he would like to continue his sports career. Feyenoord, PFC CSKA Moscow, Zenit applied for the football player. Lewandowski had accepted Borussia Dortmund F.C.

However, at first Polish football player wasn't successful in the matches in Germany. The critics gave him negative reviews. The midfielder of FC Lokomotiv Moscow - Maciej Rybus remembered that Robert had scored a significant number of goals when he was still a part of Lech F.C. Though, nobody saw the leader in him at that time. Nevertheless, in Borussia Dortmund F.C. Lewandowski had managed to gain the form and soon he became the central striking power of Dortmund football team.

As a part of "black and yellow" he won the German Cup and twice won the National Championship, and he became the second at Supercup. Next year he reached UEFA Champions League final. Moreover, he became the best scorer for three times. Robert took part in 131 matches of the German Championship in which he had scored goals to the rival’s gate for 74 times.

In 2014, after the conflicts with the administration of Borussia F.C., Lewandowski transferred to FC Bayern Munich. The football clubs had agreed that the Polish forward would change the club only upon termination of the game season, and Bavarians would pay €39 million for him.

In the matches for the games for the most titled German football club, Robert began to set more and more records. One of the records that Lewandowski had set happened at the Championship of Bundesliga when he replaced another player. In September 2015 the football player had scored five goals in the gate of VfL Wolfsburg with the interval of 3 minutes. Before this, the score at the match was to advantage of VfL Wolfsburg.

Sometime after this genius football player settled in Munich, the experts got the opinion that it would be high time to give the guy the rank of the best "nine" of the present (Lewandowski has this number on his T-shirt). This Pole also had some other achievements in the history of German Championship: he became the fastest hat-trick and poker. During the season of 2015-2016 Lewandowski awarded the next rank of the top scorer of the German Championship.

In March 2018 the forward of FC Bayern Munich distinguished with three scored goals during the match with Hamburger SV team within the national tournament. This way, the forward became the 6th player who had scored 100 goals for Bavaria in Bundesliga.

Robert Lewandowski had become an idol for Poland national team long ago. In the homeland the surname of the player and the concept of "football" are indivisible. In Warsaw, there was built a monument for the sake of the football player. Native people hopes for successful results in the forthcoming FIFA World Cup of 2018 in Russia.

Since October 2017 Lewandowski has a rank of the top scorer in the history of Poland national team. In the qualifier of FIFA World Cup, the favorite of Poland had scored the gate of the rivals for 16 times what amounted to the half of the goals scored by the team. Thus, Robert had beaten the European record of Cristiano Ronaldo and also had bypassed the captain of Portugal team in the correspondence fight of forwards.

Besides his talent in scoring the goals, Robert’s coaches note that Lewandowski has particular midfielder's technique. According to Jürgen Klopp, Robert’s switch play is excellent.

The former coach of FC Bayern Munich Josep Guardiola considers Robert, the most professional player for who pays attention to every detail, whether it is food, workout or sleep. Due to such approach, the sportsman keeps in shape and doesn't get traumas.

Besides, the football player is not star-struck. By the words of Leo Beenhakker, he is emotionally secure, and he is a real command player. Leo Beenhakker is the person who was the coach of Ajax and Real of Madrid F.C., s F.C. so that you can put faith in his words.

The wedding of Robert and his beloved Anna Stachurska in 2013 became a remarkable event in Poland. The wife of the football player is a black belt in karate. In her personal sports collection, she has 35 medals from the World Cups and Europe Championships. She also has the degree of Candidate in Physical Culture.

In May of 2017, Anna gave birth to their daughter Clara. For his family, the forward built the mansion in the picturesque place, near Mazurian Lakes.

In his homeland, the public sympathizes with the couple of Lewandowski very much. In their popularity, we can compare Anna and Robert to a couple of Beckham in England. The athletes are not only an example of beauty and style, but they also raise awareness for the healthy way of life. Besides, Stachurska is a nutritional specialist; she promotes her own brand "Foods by Ann" about what she reports on her Instagram page.

In 2017 Robert established his Stor9 agency. Its primary function is to create the image of its founder and also cooperate with the sponsors and public relations of the Polish sportsmen. The handsome football star with the height of 185 cm attracted the attention of the producers of Gillette, Coca-Cola, Huawei, and Head&Shoulders. They released some commercials with the participation of the agency.

In April 2018 there appeared information on the web that the English Chelsea F.C. became interested in the Polish football player. They were ready to offer Germans for £70 million for the forward. A month earlier it became known that Lewandowski wanted to change the team and to transfer to the football club of his dreams - Real Madrid although the present management of Bavaria didn't have the intention to expose the player on the transfer. According to Karl-Heinz Rummenigge, the chairman of the board of directors of FC Bayern Munich, they don't estimate football player in money equivalent.

According to the messages of the Spanish press, Real Madrid F.C. offers Robert the contract for two years with a possibility of extension, and a higher salary than in Bundesliga. On the other hand, in February the football player called these rumors about his possible transfer amusing and somewhat dull. 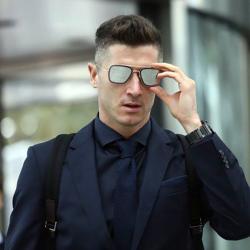