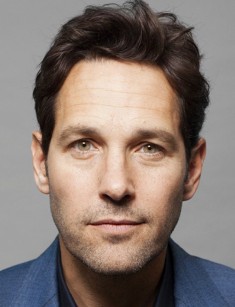 Paul Rudd is an American actor, who has gained world popularity due to the role of Mike Hannigan in the popular TV series Friends. At present, the fans know Rudd on his role of the superhero of the Ant-Man in the range of the movies of Marvel universe.

The actor Paul Rudd was born on the 6th of April, 1969 in New Jersey. His parents - the Polish Jews have immigrated from Great Britain, and then relocated to the USA. A real Paul’s name is Paul Rudnitsky, but his grandfather has shortened it in the American manner.

The future actor was growing in a wealthy family. His mother worked as a manager on the TV, and his father was the head of the airlines' company. When Paul was ten years old, his family relocated to Kansas. Here he entered the Theatre faculty of the local university. Later he has graduated and continued his studies in the British American Drama Academy based in Oxford. Paul Rudd has begun his theatrical career with the play The Damned in which he appeared both as an actor, and a producer.

Paul Rudd has begun his creative career in the cinema from voicing over the Simpsons series. In 1992 he got his first episodic role in the series Sisters. Paul Rudd had his real acting debut in 1995 when he received the role in the movie Clueless. At present, the actor has more than thirty versatile roles in his filmography.

In 1996 Rudd perfectly performed the role in the movie Romeo + Juliette, and already a year later he got the leading role in the film Overnight Delivery. In 1999 he appeared in the drama The Cider House Rules which has received the Academic Awards. After this picture, Paul Rudd has gained world popularity as an actor.

Soon the actor began to receive many invitations from the directors. Rudd took part in the three seasons of the well-known series Friends. In 2006 he performed the major role in the picture Diggers, and in 2007 the actor again appeared in the comedy Knocked Up. Moreover, in 2007 the actor has played the main character in one more comedy melodrama I Could Never Be Your Woman. This is a romantic story which tells how people of the middle age fall in love.

And in 2012 Paul Rudd has performed the role in the spin-off to the comedy Knocked Up - This Is 40. And if in the first part of the comedy Paul Rudd was just a secondary character, the husband of the leading character’s sister. The family life of his role was shown only in contrast with the mess happening between the leading characters. In the melodrama, This Is 40 the personage of Rudd has appeared in the center of the attention. The new movie tells about the problems of the happy marriage which has lasted for more than ten years. The role in the movie Anchorman: The Legend of Ron Burgundy is one of his best works. In 2013 there was released the continuation of the picture with the participation of Rudd.

In 2015 the actor became engaged in the four projects at the same time. He performed the character of Andy in the picture Wet Hot American Summer: First Day of Camp, George in Moone Boy and voiced-over the leading character The Little Prince.

But the image of Scott Lang or the superhero of the Ant-Man in the new same-name picture of Marvel Studios movie company has become the most remarkable role of the year. As well as other picture of this movie company, Ant-Man is based on the universe and character of the same-name popular series of Marvel comics.

The actor’s character is a former thief Scott Lang who has broken into the house of the inventor by chance. Here it is stored in the diminishing experimental suit. After the thief has been caught, the inventor offers Lang to choose: whether to stay in prison or to steal the similar technology from the corporation which aims at establishing the mass production of the same costumes as the weapon.

The movie was released in the Marvel movie universe what has made the Ant-Man, a candidate for the participation in the large-scale pictures-crossovers in the series of Avengers, as well as in the solo movies about other superheroes.

In 2016 the actor was working on three projects among which there was the sequel to the movie Ant-Man. But that time the actor appeared in the role of Scott Lang not in the solo picture as it was expected but joined the franchise of another character in the movie, Captain America: Civil War.

However, by comparison with the previous movies released under the name of Captain America the new film was telling not only about the plot line of Captain America (Chris Evans), and covered the great events from the life of all the Avengers. The plot of the foreign fighter Captain America: Civil War shows the split in the team after the government had issued the law about the obligatory superheroes' registration.

In 2003 Paul got married to Julie Yaeger. Before getting married, they have had relations for more than five years. In 2006 Julie gave birth to their son Jack, and in 2010 their daughter Darby was born.

The actor’s family has settled on Manhattan. What about Rudd, he is more often in Los Angeles because of the hard busy movie-making schedule. The actor is so busy in the shootings that he even doesn’t lead accounts on Instagram and other social networks and services.

In January of 2018, the theatrical community of Harvard University Hasty Pudding Theatricals which is the oldest theatrical organization of the USA announced Paul Rudd, the Person of the Year. The community has proved their choice by the remarkable achievements of the actor in the cinematography and on the theatrical stage. Moreover, the representatives of the organization noted the amazing ability of the actor not to get old since 1995.

In the covering letter, it was also noted that the representatives of the community were looking forward to the actor to disclose his secrets of the eternal youth. Moreover, they admitted that Hasty Pudding Theatricals were sure that Paul was "a cheerful guy."

At the end of February of the same year, there was premiered the thriller Mute on the Netflix web channel. In this movie, the actor has performed one of the leading negative roles.

In 2018 the actor will again return to the character of Ant Person in the next crossover picture of Marvel Studios - Avengers: Infinity War. In the new movie, Avengers with the Ant-Man as its integral part will unite with the Guardians of the Galaxy and Doctor Strange. In such a way with their joint efforts, they will be able to stop the villain who wants to rule the reality.

Besides, in 2018 there will come out one more superheroic movie featuring Paul Rudd. It’s a solo movie about the adventures of Ant-Man under the title Ant-Man and the Wasp. By March of 2018, the movie has already been shot but has been undergoing the step of additional shootings. According to the information of the sources close to the film crew, the introduction will be reshot. 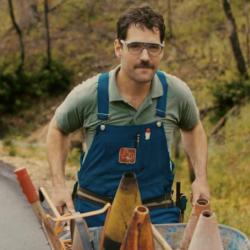