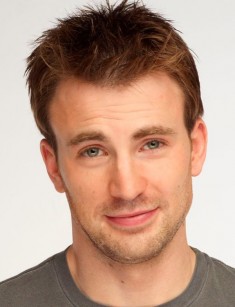 Christopher Robert (Chris) Evans was born on the 13th of June, 1981 in Boston, in the State of Massachusetts. His parents were typical representatives from the American middle class: his father G. Robert Evans was a dentist at the local clinic, and his mother Lisa Capuano was engaged in the dancing and was the creative director at Concorde Youth Theater. When Chris was small, the Evans family moved to Sudbury where the child spent all his childhood. Chris was growing an artistic and friendly child. His mother taught him to perform different dances including the tap.

Even though the guy had a quiet and peaceful character, in a short time he has received the image of "the bad guy" in the comprehensive school of Lincoln. He was the life of the company due to what he has become quite popular at school. The future Hollywood star preferred the humanities which demanded communication with people. What about the exact sciences, it was difficult for him to cope with it. Evans collected the books which tell how to survive in the wild nature, and he adored trips. Once he dreamed of living in the forest.

The boy has begun to have fancy for the acting at school, due to the influence of his elder sister Carly who was acting at the local theater. After Evans had played a couple of small roles in the performances of Massachusetts regional theater, he has seriously decided to dedicate his life to cinematography.

In 1999 the future actor relocated to New York and settled in the small apartment in Brooklyn. He entered Lee Strasberg Theatre and Film Institute and started acting in the movies.

Still studying at school, Chris Evans has visited New York for the first time to have his summer training and take part in the TV shootings. The guy was lucky, and he concluded the contract with the agency. Due to this fact, he began to have the person who was engaged in the searching of the roles for the young aspiring actor.

In 2000 the actor had his debut on the TV screens in the series Opposite Sex. Chris began his creative career from this point. The picture hasn’t gained special popularity at the spectators and had low rates. As a result, it was decided to finish the shootings after the 8th episode. And even though Evans was included to the main cast, the picture hasn't brought any special fame to the actor.

A little bit later Chris had his debut in the full-length movie. He has participated in the shootings of the family drama The Newcomers directed by James Allen Bradley. In this movie, the actor was working on the same film set with the rising Hollywood star – the actress Kate Bosworth.

Chris Evans has gained his first success and popularity due to the role in the youth comedy Not Another Teen Movie, in which the actor performed one of the leading characters. The movie came out in December 2001 and was low rated by the critics. Though that didn’t prevent the picture to find its audience. The film has opened the doors for the talented actor to other more perspective and highly paid projects.

In 2004 the movie The Perfect Score was released. This movie tells about six teenagers, who pass the exams. In this picture Chris for the first time has worked together with the famous actress Scarlett Johansson. The same year there came out the crime movie Cellular in which the leading roles were performed by such artists as Kim Basinger and Jason Statham. The actor’s work in the similar film has become a great experience for the young actor. And though both films haven't been especially successful neither at the critics nor the audience. The public and the producers have highly appreciated Evans’s acting. Step by step he receives invitations to play new interesting roles in the movies.

The projects connected with the screen adaptations of the comics have brought true success and fame to Chris. The picture Fantastic Four which was the screen adaptation of the same-name Marvel comics book has become the first actor’s movie of this kind. Evans has successfully passed all the auditions and got the role of Human Torch. Moreover, he has concluded the contract on the participation in the three movies of the franchise. The picture was premiered in July of 2005.

The box office of this picture turned out to be rather good. In spite of the mediocre feedback of the critics. In 2007 there was released the sequel to this movie under the title Fantastic Four: Rise of the Silver Surfer which was also sharply criticized. The third picture of the project was canceled because of the decision of the film company to reload the series.

In 2006 Chris refused to take part in the shootings in all the projects because of the leg injury. Though, in 2007 the actor returned to work in several pictures at the same time. Among these pictures, there was the science-fiction movie about the space Sunshine and the comedy The Nanny Diaries. In the latter film, the actor again met his colleague Scarlett Johansson on the movie set. Also, the same year Evans has voiced-over the animated pictures: Ninja Turtles in which he voiced-over the character Casey Jones and the movie Battle for Terra.

In 2008 the actor took part in the shooting of Street Kings with really star cast. The Hollywood legend Keanu Reeves, the owner of Academic Awards Forest Whitaker and the star of the series House, M.D. - Hugh Laurie have met on the same movie set. However, the star cast of the picture hasn’t contributed to getting the positive feedback from the critics. The movie has earned box office two times more than its budget.

In 2010 Evans at the same time has taken part in two screen adaptations of the comics: the picture The Losers based on the comics book of DC Comics company and in the movie Scott Pilgrim vs. the World. In the latter movie, the actor has received the role of the antagonist.

In 2013 Evans performed the role in the movie Thor: The Dark World.

In 2010 Chris Evans was invited to play a role in the picture based upon the comics telling about the superhero Captain America. The actor denied the offer of the movie company three times before he agreed to conclude the contract with them. At first, the actor didn't like the duration of the contract: according to the contract Evans had to participate in the shootings of nine movies (later the number of the pictures was reduced to six).

The previous picture of Iron Man series has become extremely famous and has made the performer of the leading role Robert Downey Jr., the center of the journalists’ attention. At that time Chris wasn't sure until the end that he wanted such popularity. The actor’s friends have helped him to change his decision and advised to sign the contract. The shootings began at the end of June of the same year. The actor had to train for two hours for four months to look like the hero of the American screen comics.

The movie Captain America: The First Avenger was premiered in July of 2011. In general, the critics have positively reacted at the story of the superhero and the movie became the nominee for many prestigious movie awards. The actor has got the award for Best Superhero at Scream Awards festival and has received three nominations for Best Actor. It was exactly the movie which has brought popularity and recognition to Evans.

The movie has become rather successful in the hire. The directors at once began to think about the creation of absolutely new sequels about the superheroes. The spectators were especially impressed by the image of Scarlet performed by the actress Elizabeth Olsen. Besides, Captain America has got the workmate "Bucky" Barnes whose role has been played by the American actor of Romanian origin Sebastian Stan in the movies - Captain America: The First Avenger and Captain America: The Winter Soldier.

Evans actively completes the terms of the contract with the Marvel Studios company and continues to take part in the photos about the superheroes from the comics. In 2012 the actor performed the role in The Avengers, and in 2014 there came out the sequel to the adventure movie Captain America: The Winter Soldier. In 2015 there was released the fifth movie Avengers: Age of Ultron with Evans's participation.

The shootings in the popular movie franchise have made Chris one of the highest paid Hollywood actors and very popular actor of the present times. Nevertheless, the actor almost hasn’t got enough time because of his busy working schedule in the series and movies.

The American actor continues to take the active part in the shootings of feature movies. The presentation of the film Gifted is set for June 2017.

In April 2016 there came out the movie about the adventures of The Avengers featuring Evans - Captain America: Civil War. It may seem, this movie will become the last one from Avengers series as the contract provided engagement in the project till the exact period. But the following parts of the picture with the participation of Evans are already in production too.

In 2016 Evans has been caught at a bad time by the users of the microblogging service on Twitter. The TV spectators criticized Chris Evans, the TV host of the famous automobile show Top Gear who is the namesake of the American actor. The debut of the TV host on the popular program wasn't successful, and the users began to send angry messages to the account of British – aChrisEvans. Though, ignoring the first letter before the name and the surname, the publications were automatically readdressed to the page of the American actor. In a short time, the programmers have managed to fix this error when one of the active users has noticed this confusion.

When many TV viewers hear the name of Chris Evans, they confuse the American with not less famous Welsh actor Luke Evans. In spite of the various assumptions of the relationship of the stars and publication of the American mass media of their photo together with the Hollywood actor Jeremy Renner, Chris Evans and Luke Evans aren't relatives.

As well as many Hollywood stars, Chris Evans prefers not to comment on his personal life. In 2001 he got acquainted with the actress Jessica Biel. Later, they have worked together in the movies Cellular and London. Their love affair has lasted till 2006. However, the actors even stayed friends after their separation.

In 2007 the actor began to have relations with the actress Minka Kelly, but their love affair wasn't long-lasting. The couple reconciled in 2012, and they were meeting for about a year before they finally broke up.

According to the information of the American mass media, at the beginning of 2016, Chris Evans met the actress Jenny Slate. In a short time, the famous American actress has become his girlfriend. The couple has had relations for a year, but in 2017 they parted.

On Instagram service and other social networks, the users keep discussing the famous actor's personal life actively, trying to get new details. 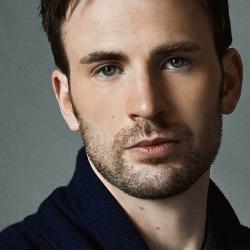