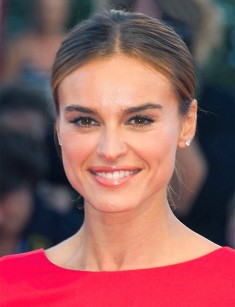 There are many talented people in the movie land, but few people succeed in achieving worldwide fame. Polish actress and model Kasia Smutniak began her acting career when she was young, but the audience immediately liked her, and the films with her participation have often become famous. The girl still pleases her fans with roles in movies and beautiful photos in magazines.

Katarzyna Anna (Kasia) Smutniak was born on August 13, 1979, in Pila (Poland) in the family of the Polish Air Force General. The girl grew up in the aviation world. She inherited a passion for the flight from her father, and at the age of 16, she obtained a glider pilot license.

At 17, Smutniak participated in the Beauty pageant in Poland and was a runner-up. Later, the girl began a modeling career. Kasia signed contracts with prestigious designers around the world. In addition to her native language, she speaks fluent Russian, English, and Italian.

Despite the nationality and the place of birth, the girl preferred to move to Italy in 1998.

Kasia Smutniak has been interested in acting since childhood, although she did not want to connect her life with a creative career. But the fate decided in its own way. After beauty contests, the girl became a famous model. Foreign designers and fashion magazines invited her to photo shoots.

However, the work as a model did not bring Kasia satisfaction. So, she decided to try her hand at the cinema to show her talents. It was not in vain, because the first movie with the participation of Kasia became successful. She began her acting career in the film At the Right Moment; afterwards there were other high-grossing films.

Smutniak perfectly plays her roles, and she looks great in each image. The girl has a unique ability to portray the most difficult parts of contradictory and ambiguous characters.

In the movie Fasten Your Seatbelts Kasia played a smart and intelligent girl who fell in love with a brutal auto mechanic (Francesco Arca). The heroes tried not to show their feelings, but there was no use. The couple marries, but the heroine only suffers from her husband’s dissipation.

Kasia coped with this role, and the girl had to feel the experiences of the woman who tied her life to the wrong man.

But the story has a happy ending. When the husband finds out about an incurable disease of the woman, he realizes that the wife is his only love.

It is fascinating to watch movies with Kasia because she can convey the emotions of her heroines that they look real. The films with Smutniak stand proudly among the highest rated movies.

In 2003, Kasia Smutniak met Pietro Taricone on the set. The young people liked each other and began to date. On September 4, 2004, the daughter, Sofia, was born. After five years of relationship, Kasia broke up with her boyfriend, but the couple soon reunited.

In June 2010, the young people planned a bright event. Taricone and Smutniak decided to take part in a skydive. It was not Pietro’s first jumping, so nothing foreboded the tragedy. But during the jumping, something unforeseen happened. The man opened the parachute when he was already 100 meters from the ground either because of the sharp gusts of the wind or because of a wrong action. He could not stop his fall in time before he hit the ground.

He suffered severe back, leg and head injuries which caused internal bleeding. The actor died after a nine-hour operation at the age of 35.

After this tragedy, the woman was alone for a while, but in 2011 she married the film producer Domenico Procacci. Three years later, it became known that Kasia was pregnant. In 2014 she gave birth to her son Leo.

Kasia has a personal account on Instagram. The actress regularly posts life photos and videos. She supports some social projects. For example, in March 2018, Kasia joined a protest against the attempt by the conservative government of Poland to impose restrictions on abortion. She posted a picture with the relevant content.

In June 2018, Kasia shared a photo from the set of the film The Voyage of Doctor Dolittle. The movie with Robert Downey Jr. in the leading role is scheduled to premiere in mid-April 2019. The film is based on the book by Hugh Lofting, where the protagonist Dr. Dolittle helps animals because he understands their language.

Nowadays Smutniak continues her modeling career. She has recently posed for the cover of the Polish edition of Vogue. The photos turned out to be very light. The young woman was photographed side-on. She smiles and squints, and the wind plays with her hair.

Her height is 173 cm, and the weight is about 57 kg. Kasia has a small tattoo between the shoulder blades. 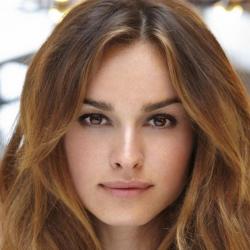