The actor from Canada starred in the series of films "X-Men." Shawn played the role of Iceman. He also appeared in the series "Smallville." Shawn is married to Dana Renee Wasdin. His twin brother, Aaron Ashmore, is also an actor.

Shawn Ashmore and his twin brother Aaron were born on October 7, 1979, in Richmond, Canada. The brothers starred together in their first film "Married to It" (1991) and in several other films. When Shawn and Aaron Ashmore were children, they also appeared in commercials.

Aaron is higher than Shawn. In one of the interviews, Aaron said that he usually plays bad guys, while Shawn Ashmore often gets the roles of good characters. The brothers have the same tattoo on the wrist.

The parents of the actor are Rick and Linda Ashmore. Shawn's father works as a manufacturing engineer, and his mother is a housewife. The actor spent his childhood in Brampton, Ontario, where he attended Earnscliffe Senior Public School and Turner Fenton Secondary School.

Shawn Ashmore played Iceman, his most famous role, in "X-Men." For the first time, Iceman appeared in the movie "X-Men" in 2000, and then in the sequel "X2" in 2003. In the second film, Iceman (Bobby Drake) appears as a boyfriend of Rogue, who introduces him to Logan at school. Iceman is one of the main characters in this film, while in the first "X-Men" his role was secondary.

In 2006, the actor starred in the film "X-Men: The Last Stand." In this part of the film, Iceman wins Pyro - John Allerdyce, who is capable of creating flames.

In 2014, the actor returned to the role of Iceman in the film "X-Men: Days of Future Past." Here, Bobby Drake, along with the other characters hides from robots who were created to kill mutants, but rebelled and began to attack ordinary people, so that the whole world is in ruins.

The actor also appeared in other films and TV series. In 2010, the dramatic thriller "Frozen" was released. It tells about young people who become stranded on a chairlift high above the ground after a ski resort closes for the night. The young people could freeze to death. Shawn plays one of the young people - Joe Lynch.

In the same year, Sean starred in another thriller - "Mother's Day." The actor played the role of a hostage George Barnum. In this film, three brothers-raiders try to hide from the pursuers after the shoot-out. The brothers decide to hide in their mother's house, where they lived in childhood. But now a new family lives there.

In 2002 and 2004, Shawn Ashmore played the role of Eric Summers in two episodes of the series "Smallville." Eric is Clark Kent's classmate. One day, the guys went on a tour, and they got struck by lightning.

Erik had a fragment of kryptonite in his bag, and the Superman's power passed to him. The second time Erik appears in the third season in the episode where Clark Kent's opponents want to take him into the mental hospital with the help of Lex Luthor.

In 2004, the actor played the main role of the young magician Ged in the two-part mini-series "A Wizard of Earthsea," based on the books of the American writer Ursula LeGuin.

The young hero enters the academy of magicians and there, using a forbidden spell, unintentionally releases the demon into the world. He began chasing the hero, and Ged has to go through many adventures to get rid of him.

Two years later, Shawn played the role of Connor in the thriller "The Quiet." All the girls at school wanted to have relationships with Connor.

The boy becomes Dot’s friend, the main character of the film. The girl lives with her uncle and aunt and behaves like she is deaf and mute. The inhabitants of the house tell her a lot of secrets. Finally, Dot had sex with Connor.

In summer 2012, the actor got married in Los Angeles. Shawn’s wife is Dana Renee Wasdin. The actor met his future wife on the set of the film "Frozen," where Dana worked as an assistant director.

Shawn likes to spend his free time with a brother. The actor loves to snowboard, listening to music and playing the guitar. Shawn has a pet - a golden retriever Jessica. It was a gift from his grandmother.

In July 2017, Dana and Shawn’s son Oliver was born. The actor posts photos of his wife with a small son on the Instagram.

The career of the actor is developing fast. In 2018, the film "Acts of Violence" with Bruce Willis in the main role was released. Shawn Ashmore got the role Brandon - one of three brothers, who always stood for each other.

Brandon returns home after serving in the army and, when human traffickers kidnapped his brother's bride, they declare war on criminals. Detective Avery helps them.

In 2017, Shawn played the role of police officer Darryl in the mystical thriller "Hollow in the Land," which tells about a woman with a difficult past who is trying to find a missing brother. 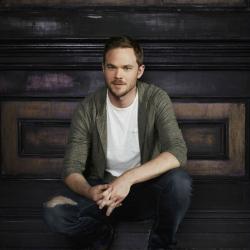