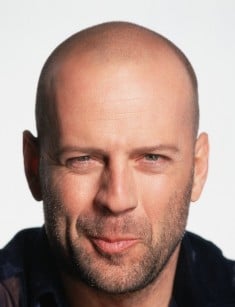 The hero of Die hard Walter Bruce Willis was born in March 1955 in West Germany, in Idar-Oberstein. His father David Willis was a civilian employee in the U.S. military and an American by origin. The mother was German and a housewife. Besides Bruce, three younger children grew up in the family. The family returned to Penns Grove (New Jersey, USA) in 1957 after father’s service in the Armed forces.

Bruce Willis had a terrible stutter in his childhood. The anxiety literally deprived the boy of speech. To overcome his annoying defect, Willis went to the school theater club. It was there that the boy realized that he loved to perform in front of a large audience. The stuttering disappeared. Bruce felt the first thrill of power over the audience there. The future hero of Die Hard played his first role on the stage of the school drama club in amateur productions of Shakespeare and Williams.

Upon graduation, Willis joined Montclair State University, where he played at the student theatre group. Then he performed on the off-Broadway stage in New York and left the University because of it.

Acting talent of Bruce Willis was not noticed on the stage but at the stand of the popular New York bar Centrale, where artistic circle spent spare time. Bruce Willis skated in the bar and had a pretty exotic look with a tattered shirt, baggy like parachute pants and a colorful headband. The cheerful bartender always sang something, cracked jokes or played the harmonica.

The future Hollywood star played the first “role” on camera in advertising Levi’s jeans. Bruce Willis’s creative biography began with bit parts in little-known theatres and television productions. But the guy was not discouraged, and tirelessly visited various auditions without giving up filming in advertising.

Great success came to Bruce Willis after his role in the TV series Moonlighting. The series was nominated for the Emmy Award in 16 categories, including Best Performance by an Actor in a TV-Series. The actor gained the fame as a comedian. Only in 1988, when Bruce starred in the legendary Die Hard, the artist showed himself in a different aspect. Since the image of the invincible savior of the world has stuck to Willis.

This film brought the young actor a deafening fame and a lot of new roles, usually of the same type. Willis appeared on the screen as a courageous “cop” that saved lives. Since then, the actor has appeared in the role of a single hero many times. Besides Die Hard Bruce played similar roles in The Fifth Element, Mercury Rising, and many others.

Willis starred in the film In Country of renowned director Norman Jewison to get rid of the image and the stereotype of a tough guy. Here Bruce is not a hero of Die Hard John McClane, but the veteran of the Vietnam war who has suffered a lot of. Critics approved that the actor was quite successful playing a psychologically profound character. Soon the audience saw another unusual Willis’s role in the film The Bonfire of the Vanities. He played a resourceful reporter for a popular newspaper.

Willis did his best as a dramatic actor, starring with outstanding Michelle Pfeiffer in the tragicomedy The Story of Us (1999). Star actor duo embodied on the screen the story of a married couple who had a crisis after 15 years of marriage.

Willis had to play bad guys on rare occasion. One of the most striking parts was the role of the killer named "Jackal" in the film under the same title (1997). According to many critics, Willis outperformed his opponent on the good side, Richard Gere, with the help of his brilliant acting. And the famous smirk even made people feel empathic to his bloodthirsty character.

And yet Willis’s admirers prefer to see him as a hero without fear and blame. As it is in the movie Hudson Hawk where Willis is gliding without stuntmen and special effects; in Armageddon where Willis’s character saves the Earth; in The Fifth Element where Bruce prevents the universal catastrophe. People hardly appreciate him in other images. Thus, he changed fan’s beloved hero of Die Hard in the action comedy Hudson Hawk, and the movie completely failed at the box office.

But critics disagreed with the audience. They believe that the best actor’s roles are secondary ones in Pulp Fiction by Quentin Tarantino and Nobody’s Fool by Paul Newman.

Willis played not only in action movies, comedies, and dramas but also in psychological films. Psychological thriller The Sixth Sense (1999) became one of the highest grossing films in the history of America. This movie brought the actor not only a surge in popularity, but also a good fee of $ 100 million.

Being in his sixties the actor is still tireless. In 2016, Willis starred in four films such as Wake, Precious Cargo, Marauders, Extracted. In 2018, another "Die Hard" is planned, as well as “Death Wish” which is a remake of the 1974 film under the same name.

Bruce Willis’s biography has many other pages which do not relate to the cinema. At the age of 60, Willis debuted on Broadway in the play Misery, based on the book by Stephen King. Previously, he tried his efforts as a businessman. He invested a considerable part of his capital in the restaurant business, becoming a co-owner of the restaurant chain "Planet Hollywood." But in October 1999, Willis along with business partners declared "Planet Hollywood" bankrupt. There are only a few restaurants around the world.

The actor sometimes arranges small solo concerts with his band The Accelerators playing the blues in the European branches of the “Planet”. By the way, Willis released two albums in the 1980's in the style of classic country.

Bruce Willis’s personal life is not a subject for discussion. The actor considers so. Perhaps that is why his luxury mansion in Hollywood is surrounded by a six feet high wall. However, that does not hamper the press often to scavenger the details of his life.

Bruce Willis met his first wife Demi Moore during the filming of the TV series Moonlight. Demi was then an aspiring actress, who played small roles in low-budget films. However, it was the same with her future husband. Although Bruce was associated with Cybill Shepherd at that time, actually it was an advertising trick aimed to promote the series. A real relationship and whirlwind romance developed on the set between Bruce and Demi Moore.

In November 1987, they got married. Soon they had three daughters: Rumer, Scout, and Tallulah Belle. But the family life that everyone considered perfect, ended abruptly. The couple announced the breakup in 1998, and in October 2000, Bruce Willis and Demi Moore divorced.

Demi married young Ashton Kutcher and Bruce married actress Emma Heming. Moreover, the actor and his new wife were not embarrassed by the significant age difference.

Bruce and Emma have two daughters Mabel Ray and Evelyn Penn. The family lives in New York in the apartment next to Central Park.

• During the filming of the movie Perfect Stranger, the actor unexpectedly refused to film a sex scene with Oscar-winning Halle Berry. Willis explained it saying that he would look awkward next to Berry. As a result, the actors had to play separately. The film was released in 2007 and it was the first film where computer technologies were applied to process the bed scene.

• Arnold Schwarzenegger, Richard Gere, Sylvester Stallone claimed the role of John MacLaine in Die Hard. However, the producers chose Willis who was invited after all the others.

• The actor has 5 children from two marriages, and all of them are daughters. Willis’s three daughters from the first marriage managed to play in films with their father. Eldest Rumer Glenn played in the film Hostage (2005) the role of the daughter of the main hero. The latter was Willis.

• Bruce Willis is left-handed. The actor had to retrain for the movie The Sixth Sense in order to write in one of the episodes with his right hand. 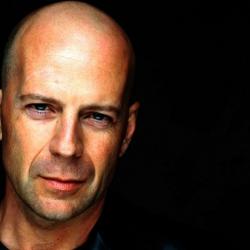