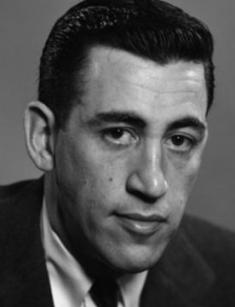 Famous American writer J. D. Salinger became one of the most influential authors of the 20th century. The most famous publication of the writer was the novel The Catcher in the Rye. Even though he did not write dozens of works, his contribution to American literature is hard to compare with any other author's.

Jerome David Salinger was born on January 1, 1919, in New York City. The boy's father, Sol Salinger, was a Jew of Lithuanian ancestry, who was engaged in wholesale trade of smoked meats and cheeses. His mother, Miriam, whose maiden name was Jillich, was of Scottish-Irish origin but converted to Judaism. Besides Jerome, there was one more child in the family, his sister Doris. The age gap between the siblings was eight years and two months.

The father strove to raise his son to be a well-educated person. In 1936, the young man graduated from Valley Forge Military Academy in Wayne, Pennsylvania. It was here that his literary debut took place: Jerome wrote three verses for the school anthem, which remains the same to this day.

In the summer of 1937, Salinger attended lectures at New York University, and after that, he lived in Poland for a year. In the city of Bydgoszcz at the request of his father Jerome studied the manufacture of sausages. After returning home, he attended lectures at Ursinus College, Pennsylvania, and in 1939 he entered Columbia University, where he participated in the course of lectures on history, which were read by W. R. Burnett.

As a result, Salinger did not graduate from any school and did not show career aspirations. With this, he caused dissatisfaction of his father, with whom he eventually stopped speaking forever.

In the spring of 1942, Jerome was drafted into the army, where he graduated from the officer-sergeant school of communication troops. The following year, in the rank of Sergeant, the man was transferred to counterintelligence and sent to the city of Nashville (Tennessee).

The main characters of most of Salinger's works are children under 17. However, he can hardly be called a young-adult writer. In his work, the author raises the theme of confrontation between a teenager and the world. The characters of his works lead such a life that does not fit any certain boundaries.

His debut short story "The Young Folks" was published in 1940 by Story magazine. As for the first significant fame, it came after the publication of "A Perfect Day for Bananafish," where the author described a day from the life of the Glass family.

Eleven years after the first publication of his early works, on July 16, 1951, his only novel The Catcher in the Rye, was sent to print. The author worked on this novel for ten years.

Literary critics of the time approved of the novel, which to this day remains popular among all ages. Despite this fact, the book was banned in several countries and states of America because of the book's doom and gloom setting and foul language.

By the time of the publication of the novel, 26 works of Salinger were already in print, including seven out of his nine novellas. In 1953 they comprised a separate collection called Nine Stories. In the 60s, the books Franny and Zooey and Raise High the Roof Beam, Carpenters saw the light of day.

In 1942, J. D. started dating Oona O'Neill, the daughter of the famous playwright Eugene O'Neill. But soon she met Charlie Chaplin and later married him.

Sylvia Welter, a German, became Salinger's first wife. First, he arrested the Nazi, and then took her to be his wife. Together they returned to America, where for some time they lived with Jerome's parents. But the marriage was short-lived - having lived together for less than a year, the couple broke up.

According to Salinger's daughter, the ground for divorce was different mindsets: later, the author came up with an offensive nickname for the girl, "Saliva."

A student, Claire Douglas, the daughter of art-critic Robert Langton Douglas, became the writer's second wife. The meeting that turned both of their lives around took place in 1950. Claire was 16 at that time, and Salinger - 31. The girl from a respectable British family went to the other side of the Atlantic away from the war.

Some sources claim that the author seduced the young Claire, but it is not precisely so. At that time, Jerome was searching for his spiritual voice and refrained from intimacy. An Indian guru became his mentor, and the religious rituals were reflected in the works of the writer.

Claire and J. D. married in 1955, and soon the couple had a daughter Margaret and a son Matt. Salinger insisted that his at that time fiancée should drop out of school four months before the graduation and come to live with him. The girl gave in and did as her beloved pleased.

The house that the young family was living in was hard to call suitable for bringing up kids. However, as Margaret reported her mother's words, the famous writer demanded exquisite food from his wife and expected her to change the bedsheets twice a week.

Their daughter was a sickly child, but the man refused to call a doctor, citing his beliefs. Later, Claire confessed to her daughter, that she was always on edge, and even when she was pregnant, suicidal thoughts occupied her mind.

Margaret believes that she and her brother were not planned children, and the girl doubted that J. D. wanted to have kids in the first place. But the writer turned out to be a decent father: he would often play with the babies and tell them stories that he had written himself.

Nevertheless, he could not resist being attracted to women. In 1966, Salinger divorced Claire, and soon her place was taken by a journalist named Joyce Maynard, who at that time was 18 years old.

Collen O'Neill became Salinger's last wife; she was 50 years younger than him.

After the novel The Catcher in the Rye became a bestseller, Salinger started leading his life in isolation. After 1965, the author stopped sending his works to publishing houses and wrote for himself instead.

Jerome David Salinger died in New Hampshire in his house on January 27, 2010. The author's literary agent reported that in 2009 Salinger injured his pelvic bone, but felt well for a long time.

The author's heirs were his last wife Colleen and son Matt. The life of Salinger was full of interesting facts, and his quotes became legendary.

The American coming-of-age movie Coming Through the Rye tells the story of the life and personality of Salinger.

"I know he's dead! Don't you think I know that? I can still like him, though, can't I? Just because somebody's dead, you don't just stop liking them, for God's sake--especially if they were about a thousand times nicer than the people you know that're alive and all."

"Certain things, they should stay the way they are. You ought to be able to stick them in one of those big glass cases and just leave them alone."

"A woman's body is like a violin and all, and it takes a terrific musician to play it right."

"I think that one of these days," he said, "you're going to have to find out where you want to go. And then you've got to start going there. But immediately. You can't afford to lose a minute. Not you."

"Anyway, I keep picturing all these little kids playing some game in this big field of rye and all. Thousands of little kids and nobody's around - nobody big, I mean - except me. And I'm standing on the edge of some crazy cliff. What I have to do, I have to catch everybody if they start to go over the cliff - I mean if they're running and they don't look where they're going I have to come out from somewhere and catch them. That's all I do all day. I'd just be the catcher in the rye and all. I know it's crazy, but that's the only thing I'd really like to be."