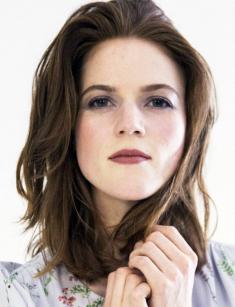 Red-haired people are considered to be persistent, self-motivated, and freedom-loving.

There is no wonder that beautiful, angel-like Rose Leslie with has conquered the hearts of millions. The British actress earned her fame for the role of brave Ygritte in the series Game of Thrones.

Rose Eleanor Arbuthnot-Leslie comes from a high-ranking family and has Scottish roots. The girl grew up like a princess; many children could envy her. Rose was born in Aberdeen, the third largest city in Scotland, which was the magic place. The family had an estate, medieval Lickleyhead Castle, the history of which dated back to the 15th century. The girl’s parents were wealthy and noble. The father, Sebastian, was a famous entrepreneur, and the mother, Candida Mary Sibyl, belonged to the offspring of Charles II of England.

Rose was the third among five children in the family; she had two brothers and two sisters. The parents pampered the kids, and the future star’s childhood was cloudless. Choosing the right private school was the only challenge.

When the girl was ten, the family moved to Maisons-Laffitte not far from Paris. Rose entered the Ermitage Elementary School. Three years later, the Leslies came back to England.

Rose dreamed of acting from early childhood and tried to catch everyone’s attention. According to Leslie, it was the effect of the large family and her own character; sometimes, she had to scream to be noticed. The girl loved to be praised.

The rich parents tried to support their children in everything; they contributed to their daughter’s future significantly. When Rose turned 13, she entered Millfield, the private school that focused on developing students’ artistic talents, especially drama skills. Five years later, Rose moved to London and enrolled at the London Academy of Music and Dramatic Art.

Although Rose’s parents had money, the red-haired young woman got used to doing things, including career development, on her own. With her famous second name, Leslie worked on small and episodic roles, despite the fact that she could participate in top-grossing projects at once.

Young Rose debuted on television in the documentary series Banged Up Abroad by National Geographic Channel. Her work was pretty good.

In 2009, when the actress was 22, she got an episodic part of Rhian in the movie New Town. Thanks to this role, Leslie won the Scottish BAFTA for Best Acting Performance – New Talent Award. However, the period of secondary characters went on. At the same time, Rose successfully performed in the theater play Bedlam about a medieval mental hospital.

Game of Thrones is the most expensive and popular fantasy series. The project was launched in 2011; by now, seven seasons have been aired. The actress was invited to the series in 2012; she could not but accept the large, exciting offer.

Game of Thrones is based on the novel A Song of Ice and Fire. The actor Kit Harington (Jon Snow) was looking forward to the love story of his character with red-haired Ygritte; he wondered how he would portray the feelings of the man in love and his focus on this woman. By the way, Ygritte was not beautiful in the book: George R.R. Martin described her as a round-faced person with a turned-up nose and slightly crooked teeth.

The thin, fragile artist was not afraid of much pressure; on the contrary, she was enthusiastic because she would have to climb rocks and do archery. The actress worked hard on her character and learned how to imitate the north accent days and nights.

Apart from Game of Thrones, Leslie became famous for the series Downton Abbey (2010). Although Rose came from a wealthy background, she personified the poor housemaid brilliantly.

After the success in Game of Thrones, the actress continued to play secondary characters. In 2012, she participated in the melodrama Now Is Good and personified Fiona. There were some episodic roles in mini-series, such as Utopia and The Great Fire.

2013 was marked with the lead role in the horror Honeymoon with Harry Treadaway. The actors played the newlyweds who had a rest in an isolated house in a forest. Suddenly, there is something wrong with Bea (Rose Leslie): after the young woman has gone for a walk in the mysterious forest, she becomes strange and distant from her husband.

In 2015, Rose played a witch in the movie The Last Witch Hunter starring Vin Diesel. The next year, the actress received the role of the investigator’s friend in the fantastic movie Morgan.

The actors who played Jon Snow and Ygritte became a couple in real life. Their story is romantic: Kit Harington and Rose Leslie fell in love at the movie set. When scriptwriters noticed that, they added encouraged their passion and added hot scenes to the series.

The couple broke up in 2014 but made amends later. In 2018, the lovers married officially.

Rose Leslie appeared in the American spin-off The Good Fight and got one of the lead roles. The project started in 2017; two seasons have been released.

Today, there are many fan pages of the actress in social networks; one can learn the latest news there.