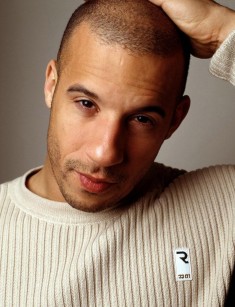 The star of “The Fast and the Furious” Vin Diesel is the native of New York. He was born in July 1967. The actor’s real name is Mark Sinclair Vincent. The boy was brought up in a single-parent family that lived in a multi-story house in New York.

Mark Sinclair is one of the twins. It is peculiar that the brothers are completely different in their appearances and characters. The mother brought up the children alone until they were three. The boys never saw their biological father.

The origin of the twin’s father is a mystery. According to one of the theories, Mark Sinclaire Vincent is half-Italian and half-African. Another theory states he has German, Irish, Mexican, and Dominican roots. However, the famous actor does not like talking about his origin. He always tries to emphasize that he belongs to various cultures.

The boy demonstrated his acting skills at three. At that time, the mother married, and the twins had the adopted brother and sister. The stepfather Irving taught acting at a university and administrated a theater. This fact influenced Mark Sinclair’s character formation: the boy revealed the burning interest to this sphere. The stepfather took the kids to various theater performances and all new movies premieres.

In other respects, the would-be actor’s childhood was similar to that of the children of his age. Still, there was an unpleasant peculiarity of his adolescence: Mark was growing up fast but remained thin in comparison with his peers and got the offensive nickname “Worm.” Diesel’s shyness prevented him from expressing and realizing himself. The boy felt embarrassed at his thinness and exerted himself with long training in the gym for several years in order to change.

If the hand of fate exists, this is what “led” Vin Diesel to the theater. The 7-year-old boy and his friends sneaked to the theater to have a closer look at the stage property and maybe play in those mysterious “ruins.” The boys did not think that a rehearsal was scheduled for that time, and the hooligans were caught red-handed. The director made them role-play the scenario as a punishment. Mark managed to fulfill this task best of all, so the administrator gave the boy the opportunity to play on the stage and promised the $20 award. Diesel was thrilled. Since that moment, he visited all theater rehearsals.

Diesel debuted in the play “Dinosaur Door.” As the applauding subsided, the young man finally made a decision to choose the acting career that he continued to master until 17.

In the course of time, the young actor realized that he would not be able to earn a lot of money at the theater. By that time, Vin Diesel’s appearance changed: thanks to his constant training in the gym, his muscles became sculpted, and he reached manhood. Nobody could think of calling the young man the old offensive nickname “Worm.”

In order to earn his living, Vin Diesel got the job of a bouncer in the nightclub “Tunnel” in Manhattan where he worked for three years. He shaved his head and changed his name to “Vin Diesel.” At the same time, he became the student of the Hunter College where he studied English and classic literature. Simultaneously, the actor was writing scripts which later played a special role in his career.

In 1987, Vin Diesel decided to change his life completely. He quitted the job in “Tunnel” and the college in order to fulfill his cherished dream – to become a Hollywood star. However, he could not conquer Los Angeles on the spur of the moment. Since the young man did not impress the dream factory and its inhabitants, he had to look for a job to survive.

Vin Diesel became a salesperson in a TV shop and worked there for about a year; his working day lasted for 18 hours per day. Vin managed to establish himself positively, and the man’s earnings were pretty good. However, he came back home in New York.

The young man eventually found his way to appear on the big screen. Vin Diesel’s movie career began in 1990 when he acted in a tiny episode in Penny Marshall’s drama “Awakenings.” The future star played a nurse; the role was so insignificant that the actor’s name was not even included in the movie credits. However, the movie itself was nominated for the Academy Award.

Everything was set in motion. Inspired, Vin Diesel started writing his own scenario on the basis of which he created the movie “Multi-Facial” five years later. Diesel took the leading part. The movie was honored with screening in Cannes. Although it was not showered with awards, it was the first success.

Vin Diesel went to Los Angeles, close to Hollywood, again and began to work in the same TV shop. At this period, he was pondering the idea of the new movie “Strays.” The premiere of the movie took place three years later at the Sundance Film Festival. Diesel played the key character of the story, Rick. Even though the movie was not an overwhelming success, the famous director Stephen Spielberg noticed the promising, bright actor. As he appreciated Vin Diesel’s acting, he offered him a role in his project “Saving Private Ryan.” The movie came out and turned into the iconic masterpiece. Vin Diesel was nominated for the prestigious Screen Actors Guild Award for the work in this star project.

Since that moment, the movies with the new Hollywood star followed one by one. They were broadcast not only in America but also in many European countries. In 2001, three more popular movies extended Vin Diesel’s filmography: “Boiler Room,” “Pitch Black,” and “The Fast and the Furious.” The actor played the main character in the latter project and received the fantastic profit of several million dollars.

In Rob Cohen’s “The Fast and the Furious,” Vin Diesel masterfully played Dominic Toretto, the leader of the street racers’ band. The actor received serious training in a stunt performance school to get into the character – that is why viewers can hardly catch their breath when they watch the chasing scenes and the movie stunts.

Paul Walker who was little known at that time played one of the leading parts in “Furious-7.” The two rising Hollywood stars received the prestigious MTV Channel Award.

Unfortunately, Vin Diesel’s eyes were traumatized by special contact lenses that glowed in the dark during the fantastic movie “Pitch Black” production. The actor had to undergo a rehabilitation course. However, the movie was warmly welcomed by viewers and received wonderful reviews and the good box office twice as much as the movie shooting expenses.

In spring 2002, the company Universal Pictures began to shoot “2 Fast 2 Furious.” Because Vin Diesel asked for a too high fee for his participation, the company made a decision to work on the project without the actor. (The movie came out in summer 2003 and suddenly turned out more successful than the first part: it brought $236 million).

The premiere of “The Chronicles of Riddick” took place in summer 2004, but there were no good box office achievements. The movie creators only managed to return the money spent on the movie shooting. Movie critics’ reviews were also unpleasant for producers. In 2005, Vin Diesel was nominated for the Razzie Award for Worst Actor for this work.

In 2009, happy Russian fans met Vin Diesel in Moscow; the actor’s impressions on Russia were warm. Next year, it was announced that the favorite actor of millions of viewers would take part in the legendary “The Fast and Furious” franchise fifth movie. The whole “old” team returned to the project.

The premiere of “Fast Five” occurred in Rio de Janeiro in April 2011. Vin Diesel not only played Dominic Toretto but also acted as the project producer.

In 2013 and 2015, the Hollywood actor’s fans watched the 6th and the 7th parts of “The Fast and the Furious.” The 6th movie was created in Britain, Los Angeles, the Canary Islands, and Glasgow. The production of the seventh movie was marred by the tragedy: the movie shooting stopped because of Paul Walker’s death and proceeded only next year in spring. Viewers watched the movie in April 2015. In the same year, Vin Diesel presented the movie “Fast & Furious: Supercharged” to his fans.

2015 was also marked with Breck Eisner project “The Last Witch Hunter” where Vin Diesel played the leading part with Rose Leslie. It is the city fantasy and the action and adventure movie at the same time. The actor not only appeared on the screen but also worked as the movie producer.

As it turned out, the actors Vin Diesel and Dwayne Johnson made amends after a short quarrel during “The Fate of the Furious” production. Johnson was not happy that Diesel stayed too long in his trailer and made the whole movie crew wait for him. While other actors got used to this behavior, Dwayne did not remain silent. Fortunately, the conflict between the two stars was solved.

Vin Diesel has his own star on the Hollywood Walk of Fame. He has also 7 prestigious awards and 26 nominations for a wide range of awards.

The athletic handsome man has never suffered from the lack of fans’ attention. Vin Diesel’s life consists of numerous love affairs with the famous beauties of Hollywood. During “The Fast and the Furious” production in 2001, the actor met the charming Michelle Rodriguez. However, their bright relationship that started at the movie set faded away soon: the couple spent only six months together. Michelle realized they were too different for the serious relationship. The former lovers split up easily.

Vin Diesel found his personal happiness with another beauty, the Mexican photo model Paloma Jiménez. The common-law wife gave birth to three lovely kids and made the actor think about having a family. In April 2008, the daughter Hania Riley was born; in fall 2010, the son Vincent Sinclaire was born. Vin Diesel called his third child, the tiny Pauline, in honor of his deceased friend Paul Walker; the girl was born in March 2015.

The majority of fans agreed that Nina Dobrev just wanted to annoy her former boyfriend Ian Somerhalder this way. The friendship with Nina does not threaten Vin Diesel’s and Paloma’s marriage. 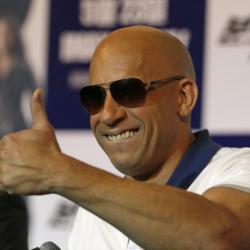