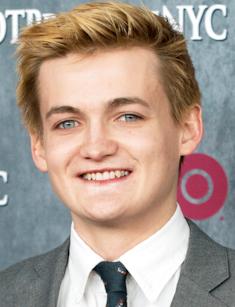 Jack Gleeson is an Irish actor, better known for his role as Joffrey Baratheon in the TV series Game of Thrones. He has not wanted to pursue his career and retired from screen acting after the end of filming in the TV series.

Jack Gleeson was born on May 20, 1992, in Cork, Ireland. Gleeson attended Gonzaga College, an independent Catholic boys' secondary school, in Dublin. At the age of seven, the future actor began to attend drama school together with his sisters, Rachel and Emma. Later, Jack's sisters also became well-known actresses in their country.

Gleeson continued his education at Trinity College, where he studied theology and philosophy. Jack is also a member of the DU Players in Dublin.

The young actor made his acting debut in short films in the early 2000s. In 2005, he appeared in Batman Begins, in which he played the bit part of a boy without a name. In 2007, the actor played another small role in the Irish horror film Shrooms. The title character, who has eaten a strange mushroom in the forest, has hallucinations and sees Gleeson’s hero.

Two years later, the young actor starred in the Irish family drama A Shine of Rainbows. Gleeson’s character is a boy named Seamus, one of the friends of the protagonist, Tomás. Seamus, his sister Nancy and Tomás go to a cave with bats, but then the frightened main hero runs away. Seamus and Nancy follow and calm him down, and later the protagonist spends time in their house.

In 2010, the actor played a significant role in the film All Good Children. Magazines began to publish glowing reviews about Gleeson who was called the "great discovery."

From 2006 to 2008, the actor starred in four episodes of the Irish comedy series Killinaskully. The TV show tells about the fictional Irish village of Killinaskully and strange events that take place in it. The director created the characters, based on stereotypes about the Irish villagers. The actor plays the role of Pa Connors Junior.

Jack achieved the peak of his popularity after he was cast for the project Game of Thrones. It is an American fantasy TV series which is based on “A Song of Ice and Fire,” George R. R. Martin's series of fantasy novels. Jack Gleeson portrayed Joffrey Baratheon, the son of Queen Cersei Lannister. He was instated on the throne by his mother after the death of King Robert.

There is one interesting fact associated with Joffrey, his brother, and sister. All of them are bastards because Queen Cersei gave birth to the children being involved in an incestuous affair with her brother, Jaime.

Joffrey is cruel and moody. The young king torments his bride Sansa Stark and condemns her father, Lord Stark, to death because the latter has become aware of the true origin of the "royal" offspring. Actress Sophie Turner performed the role of Sansa in the series.

The young king, Joffrey Baratheon, is poisoned at his own wedding in the second episode of the fourth season. For the role of Joffrey, the actor won the IGN People's Choice Award for Best TV Villain.

In 2012, in an interview, the actor announced the end of his acting career, and since 2014 he has not appeared in films. Jack was determined to quit the film industry after the end of Game of Thrones. The life of a popular actor has not appealed to him. He planned to conduct scientific research, but in the end, abandoned this idea.

In 2014, Jack Gleeson featured in a racy picture in the Trinity Nude Calendar 2014.

There is no information about the personal relationship of Jack Gleeson. The young man is reserved and prefers to hide the details of his life.

The former actor has not given rise to rumors, and it is not known whether he is married or not, whether he has a girlfriend. It is also unknown whether Jack has an account on Instagram.

Jack Gleeson founded his own theater company The Collapsing Horse in Dublin. In 2015, he staged his own puppet show, Bears in Space.

In mid-2016, the show premiered in New York City. Now Jack continues to develop this project.

Through Dublin's Gate Theatre, Gleeson has gotten to work with many fine actors, including Domhnall Gleeson. Although they have similarities in their last names, the actors are not relatives.

In 2019, the last season of the cult series Game of Thrones will be released. Although Jack's hero has already been killed, it does not affect his popularity among fans of the project.

Jack Gleeson has a net worth of $6 million.