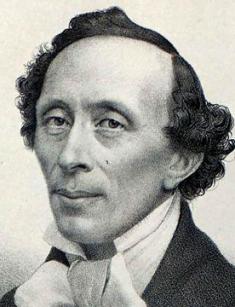 Few people in the world do not know the name of the great writer Hans Christian Andersen. More than one generation grew on the works of this master, whose works were translated into 150 languages. Parents read to children the fairy tale «The Princess and the Pea» before going to bed. The kids watch movies and cartoons about a Mermaid or a girl Gerda, who dreamed of rescuing Kai from the cold hands of the stale Snow Queen.

The world, which is described by Andersen, is fantastic and beautiful. But there is a philosophical thought along with the magic and flight of fantasies in his fairy tales because the writer devoted his work to both children and adults. Many critics agree that there is a deep meaning in Andersen's narration, whose task is to give the reader the necessary food for thought.

Hans Christian Andersen was born on April 2, 1805, in the third largest city in Denmark, Odense. Some biographers claimed that Andersen was the illegitimate son of the Danish King Christian VIII but the future storyteller grew up and was brought up in a low-income family. His father, who was called Hans, worked as a shoemaker and his mother Anne Marie Andersdatter worked as a laundress and was an illiterate woman.

The head of the family believed that his pedigree began from a noble dynasty: the grandmother on his father`s side told her grandson that their family belonged to a privileged social class but these conjectures were not confirmed and were challenged over time. There are many rumors about relatives of Andersen that make the minds of readers exciting to this day. For example, the grandfather of the writer, who was a carver by profession, was considered crazy in the town because he made strange figures of people with wings, like angels, which were made of wood.

His father read him the book «Thousand and One Nights», which was the traditional Arabic fairy tale. So, young Hans plunged into the magical stories of Scheherazade every night. Also, the father and son loved to go for a walk in the park in Odense and even attended the theater, which made a lasting impression on the boy. In 1816, the writer's father died.

The real world was complicated for Hans. He grew up an emotional, nervous and sensitive child. Andersen blamed the local bully and teachers because they punished the students by flogging, so the future storyteller believed the school was unbearable torture.

His parents sent him to a charity school for sick children when Andersen refused to attend classes. Hans worked as a weaver, then as a tailor and later worked in a cigarette factory, after receiving primary education.

He did not have good relations with his colleagues. He was embarrassed continuously by crude jokes and of workers and once Hans was pulled down his pants to make sure he was a boy or a girl. And it happened because the writer had a high-pitched voice and often sang during the shift. This event made the future writer withdraw into himself completely. The only friends of the young man were wooden dolls, which were made by his father.

When Hans was 14 years old, he moved to Copenhagen in search of a better life, which was considered «Scandinavian Paris» at that time. Anne Marie thought that Andersen would go to the capital of Denmark for a while, so she let her beloved son go. Hans left his father's house because he wanted to become famous, wanted to learn acting and play on the stage of the theater in classical productions. It is worth saying that the future storyteller was a man with a long nose and limbs, for which he received offensive nicknames «stork» and «lamppost.»

Also, Andersen was teased «a writer of plays» in his childhood because the boy had a toy theater in his house. A diligent young man with a funny appearance gave the impression of an ugly duckling, who was accepted into the Royal Danish Theater, out of pity. Hans played secondary roles on the stage of the theater. But his voice began to break soon, so his classmates, who considered Andersen, a poet, advised the young man to concentrate on literature.

Jonas Collin, who was a Danish statesman and handled finances during the reign of Frederick VI, was very fond of the unlike young man and persuaded the king to pay for the education of the young writer.

Andersen studied at the prestigious schools of Slagelse and Elsinore (where he sat with students, who were younger six years at the same desk). Hans made multiple spelling and punctuation mistakes in writing. Later, the storyteller recalled that he had a dream about student years because the rector constantly criticized the young man and, as you know, Andersen did not like it.

Hans Christian Andersen wrote poems, novels and ballads during his life. But his name is primarily associated with fairy tales for all readers. The master had 156 works. However, storyteller did not like to be called a children's writer and said that he wrote for both boys and girls and adults. Andersen ordered that there was not any child near his monument.

Hans gained recognition and fame in 1829, when he published an adventure story. Since then, the young writer did not depart from the pen with an inkwell and wrote literary works one after another, including the tales that glorified him, in which he introduced a system of high genres. However, it was hard for the storyteller to write novels and vaudeville; he had a creative crisis in the moments of writing.

Andersen drew inspiration from everyday life. According to him, everything is perfect in this world: the petal of the flower and the little bug and a spool of thread. Indeed, if you remember the works of the creator every galosh or pea from the pod has a fantastic biography. Hans wrote his works, which were based both on his imagination and on the motives of the folk epic, he wrote «The Wild Swans,» «Svinedrengen» and other stories, which were published in his collection.

Andersen loved to make those main characters, who looked for their place in society. Such fairytales as «Thumbelina,» «The Little Mermaid,» and «The Ugly Duckling» can be included in it. These characters cause the author's sympathy. All the stories of Andersen have the philosophical meaning from cover to cover. It is worth remembering the fairytale «The Emperor's New Clothes,» where the Emperor asks two people to sew him expensive clothes. However, the outfit turned out to be complicated and consisted entirely of «invisible threads.» The crooks assured the customer that only fools would not see the fragile fabric. Thus, the king is in an indecent image in the palace.

He and his courtiers do not notice this dress but they are afraid to make fools of themselves if they admit that the ruler walks without clothes. This fairy tale was interpreted as a parable and the phrase «The Emperor has no clothes!» is included in the list of popular expressions. It is remarkable that not all of Andersen's fairy tales are with luck, the reception «Deus ex machina» is not in all manuscripts of the storyteller, when the casual coincidence appears out of nowhere, saving the main character (for example, the Prince kisses the poisoned Snow White) as if it happened by God's will.

Adult readers love Hans because he does not create the perfect world, in which everyone lives happily ever after and he sends a steadfast tin soldier into a burning fireplace. In 1840, the creator tired his hand in the genre of short stories, miniatures and published his collection. The book entitled «To be, or not to be» was released four years later but all attempts of Andersen to establish himself as a novelist proved to be futile.

Andersen's first choice was the sister of his friend at the school, Riborg Voigt. But the indecisive young man did not dare to talk to her. Louise Collin was the next potential bride of the storyteller. She stopped any attempts at courtship and ignored his love letters. The 18-year-old girl preferred Andersen, a wealthy lawyer.

In 1846, Hans fell in love with the opera singer Jenny Lind, who was nicknamed «Swedish Nightingale» because of her loud soprano. Andersen watched Jenny behind the scenes and gave the beautiful woman poems and generous gifts. But the charming girl was in no hurry to respond to the sympathy of the storyteller and treated him like a brother. Hans was in depression when he learned that the singer had married the British composer Otto Goldschmidt. The cold-hearted Jenny Lind became the prototype of the Snow Queen from the eponymous fairy tale of the writer.

Anderson was unlucky in love. Therefore, it is not surprising that the storyteller visited the red-light districts when he arrived in Paris. However, Hans talked to them, sharing details of his miserable life instead of spending all night with frivolous young ladies. The writer was surprised and looked at the interlocutor with evident disgust when Andersen`s friend hinted to him that he attended brothels for other purposes.

It is also known that Andersen was a devoted fan of Charles Dickens, the talented writers met at a literary meeting. Hans wrote in his diary after this meeting:

«We went out on the veranda. I was happy to talk to the writer of England, whom I love most. »

The storyteller again arrived in England and came in the house of Dickens after ten years. Charles stopped correspondence with Andersen over time and the Dane did not understand sincerely why all his letters remain unanswered.

In the spring of 1872, Andersen fell out of bed, which caused multiple injuries, from which he was unable to recover.

Later, the writer was diagnosed with liver cancer. On August 4, 1875, Hans died. The great writer is buried in the cemetery in Copenhagen.