British Jamie Oliver, also known as Jamie or The Naked Chef, is a famous host of cooking programs, the author of a dozen cookbooks with detailed and delicious recipes, the owner of a chain of Italian restaurants. The chef is considered to be a culinary genius who combines his charm with showmanship talent. Thus, Jamie has won the hearts of millions of fans around the world.

Oliver makes the use of his influence not only for wealth accumulation. He works with young people, attracting even troubled teenagers to the art of cooking. The chef fights childhood obesity, promotes healthy diet and offers healthy foods in the school canteens. Queen Elizabeth II honored him with an Order of the British Empire Award. Since then he has been officially named Sir Jamie Oliver.

Jamie Trevor Oliver was born on May 27, 1975, in the village of Clavering, Essex, England. He grew up in Cambridge, where his parents, Trevor and Sally, own the pub and restaurant, The Cricketers. It was built in the XVI century, owned by the Oliver family since 1976. Eight-year-old Jamie and his sister, Anne-Marie, helped their parents in the pub.

At the age of 11, the boy could cut vegetables and also hand all the duties of the kitchen staff. In addition to cooking, the future TV star had other hobbies. In 1989, the teenager together with musician and composer Leigh Haggerwood founded the band Scarlet Division, where he played the drum set. In October 2000, their single “Sundial” peaked at Number 42 on the UK music chart.

At the age of 16, Jamie began studying at Westminster Kingsway College. He continued his education in France.

Later, the young cook moved to The River Café in London as a sous-chef and worked there for three and a half years. He learned how to cook tuna in a masterful way and began to promote healthy eating. When Oliver appeared in the BBC documentary Christmas at the River Cafe in 1997, the cook's life turned into the biography of a TV star.

In 1999, the programme The Naked Chef was released, which made Jamie famous and brought him the BAFTA Award. The intriguing title of the show has nothing to do with erotica. Director Patricia Llewellyn, who titled the project The Naked Chef, meant that the cook was utterly frank with viewers and did not hide anything. By the way, later the producers offered Jamie to appear nude, but he invariably refused.

Jamie has done charity work since 2002 when he opened the Fifteen Restaurant, where he recruited fifteen young people without cooking experience, but with a criminal background. This idea was successful and led to the creation of the chain of the Fifteen restaurants in England and Australia.

In 2005, he initiated the campaign originally called Feed Me Better aimed at teaching British students to eat healthy food. The government also supported it, and Oliver changed the standards of school breakfasts and urged to impose a tax on sugary beverages.

The famous chef has an official website. They present his new books, as well as projects with his participation, and add links to videos of his Youtube channel. Jamie's short videos fall into groups based on the main product or type of dish.

There are recipe videos devoted to the methods for cooking chicken or shrimp in different ways on Jamie Oliver's Food Tube. Thanks to the unique sauces, which the author borrowed from the national cuisines of the world, a cut of beef or fish acquires new tastes, becoming the basis of a family dinner or gala dinner.

Oliver teaches delicious food lovers in a funny and happy way to make pizza toppings or pie filling from what was left in the fridge after yesterday's dinner. Traditional British pudding was also invented by careful housewives and honed to perfection by a professional.

The chef is married to the charming model, Juliette Norton, better known as Jools. The future spouses met in 1993 when Jamie was not famous. The young people married in 2000 when he could provide for his family. The couple bought a house and settled in Oliver's home village. On March 18, 2002, the eldest daughter, Poppy Honey Rosie, was born, and on April 10, 2003, the second one, Daisy Boo Pamela, appeared in the family.

Six years later, on April 3, 2009, Jools gave birth to her younger daughter, Petal Blossom Rainbow. After the birth of a son, named Buddy Bear Maurice, on September 15, 2010, the happy father announced that he was delighted and ready to undergo deferentectomy. But on August 8, 2016, Jamie became the father of one more boy named River Rocket.

Oliver came to the Portland Street Hospital with his older children to take his wife and a newborn son. The family photos moved the hearts of Sir Jamie’s fans. Juliette is tasting her husband's new dishes and testing his recipes. The chef wrote in one of the books:

“Jools’s opinion helps simplify recipes so that they are accessible to every food lover. If she cooks them, then you can.”

Oliver’s book “Five Ingredients: Quick and easy food” was a Christmas present for Russian fans. Each of the hundreds of dishes consists of only five ingredients that can be mixed quickly and easily, making a delicious dish. These are no balanced meals, but salads, pasta, and rice with vegetables and greens, rich meat dishes. A separate chapter is devoted to desserts. There are no difficult recipes of cakes, but there are recipes of delicious cookies.

Sir Jamie Oliver does not give up his campaign for the health of schoolchildren. In January 2018, he called on the United Kingdom government to ban the sale of energy drinks to children. Jamie believes that caffeinated beverages cause addiction, making it difficult for children to focus on their classes and acquire new knowledge.

An ordinary bottle of energy drink contains one and a half or even twice as much caffeine as the allowable daily dose for schoolchildren. Although bottles of energy drinks are labeled as the products not suitable for children, bright packaging and their taste lead to the fact that a quarter of consumers are children. Waitrose Stores and the trade union, NASUWT, supported Jamie’s initiative.

The famous chef runs fifty Italian restaurants, entitled Jamie's Italian. Two of them are located in Russia, in St. Petersburg and Moscow. It is not easy to manage such an extensive chain. In 2018, Jamie plans to close 12 of 35 restaurants in the UK due to losses. In 2017, he had to close a branch in Istanbul and six restaurants in his homeland.

The fate of the rest of the restaurants is not yet decided. If lessors agree to reduce the rents, and managers can serve customers better, then perhaps the business will stay afloat. Now Jamie owes suppliers and employees seventy million pounds, and last year the losses amounted to thirteen million pounds. 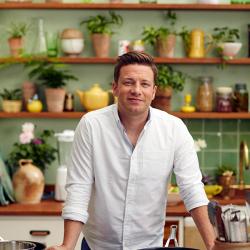