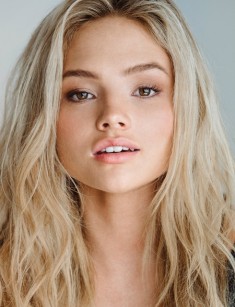 Natalie Alyn Lind is the young American actress and the new Hollywood star. The daughter of Barbara Alyn Woods, she has been showing her talent from the early childhood: the six-year-old girl debuted in the drama One Tree Hill and received her first significant role in the series The Goldbergs.

Natalie earned the global fame thanks to the crime series Gotham (the role of Silver St. Cloud) and the role in an episode of iZombie. Nowadays, the actress is starring in the superhero series The Gifted, the project of Marvel and Fox.

Natalie Alyn Lind is the first child of the American TV star Barbara Alyn Woods and movie producer John Lind. The future actress’s parents met at the movie set of Honey, I Shrunk the Kids.

Pregnant Barbara continued working on the TV series. 17 years later, Natalie told Glamor that she was almost literary born on the movie set and absorbed acting with her mother’s milk.

Natalie has two younger sisters who also prove that age is no barrier to good work and appear in movies. Emily is known for the roles of Emma in the comedy All My Children and Amanda Clarke in the movie Revenge. Young Alyvia debuted in the comedy The Young and the Restless. The younger sisters are likely to become top stars in the nearest future.

The girl’s star parents encouraged their daughter’s interest in acting. Natalie stepped on the movie set when she was six. In 2006, she appeared in the movie One Tree Hill where Barbara played Deb Lee.

In her childhood, the girl received secondary roles in movies and on TV. In 2006-2013, she participated in the TV series Army Wives, Criminal Minds, and Flashpoint.

At 13, Natalie was offered the role of Dana Caldwell in the series The Goldbergs. The story of the 1980s American family and its daily problems lasted for six seasons; Natalie appeared in 21 episodes. No wonder that the audience viewed the role of Dana as the most memorable work of the young actress.

Natalie got rid of the image of Dana after she appeared in the series Gotham in 2015. Although her role was secondary, she successfully demonstrated her acting talent. Collaboration with Benjamin McKenzie, Robin Taylor, and Cameron Monaghan catalyzed the young talent’s career development.

In 2017, Natalie was offered the role of Winslow Sutcliffe in an episode of the series iZombie. This secondary role turned out to be the break before the quick career progression.

At the beginning of 2017, the American company Fox collaborated with Marvel and launched the new superhero TV series The Gifted. In March, the cast was revealed. Natalie Alyn Lind took one of the lead roles.

The series is set in the Marvel universe and has close connections with X-Men movies. However, there are no figures like Wolverine. Unlike the series Legion and Agents of S.H.I.E.L.D. based on X-Men comics, The Gifted is notable for the disillusionment.

The series tells the story of the American family whose life turns upside down when the children demonstrate superpowers. In the first season, the characters have to hide from the government, join a shadow organization, and fight for survival.

Lauren Strucker, Natalie’s character, can manipulate force fields. In one of her interviews, the actress said that she asked herself what force looked like many times. As the movie was made, it was the most challenging task for the actress to control the invisible substance. Lind mentioned she had worked 15 behavioral models of her character before she created the image of Lauren.

Despite the superhero flavor, The Gifted is the drama illustrating how society hates and despises people different from the majority.

In October 2017, the series was premiered on Fox channel. At the beginning of 2018, the second season of The Gifted was announced. The cast has not changed. In October 2018, the audience will have the chance to enjoy the actress’s work on Fox.

Love knows no age. 15-year-old Natalie met the young actor Aramis Knight who starred in the series Into the Badlands. At the beginning of 2015, the young people started dating. However, several months later, they split up. Natalie did not reveal the reasons for the break-up. Later, Paris Berelc, Aramis’s new girlfriend also broke up with the young man quickly and told his fans about his cheating. In this context, Natalie could have broken up with Aramis because of that. The actress’s fans agree it was the right decision.

In January 2017, Natalie posted the photo with an unknown young man on her Instagram. Dying to know who that guy was, people started showering the actress in questions but failed to identify the young man: Lind preferred to keep secret his name which made her ex jealous.

In 2018, Natalie has posted no photos with her boyfriend; it looks like the beauty is single now – or, perhaps, she decided to keep her private life quiet.

The young actress has been working hard on the second season of the TV series The Gifted. Today, Natalie posts photos from artistic events and family pictures on her Instagram page. There was a post where the actress expressed her joy of being the member of the friendly Marvel family. Natalie also has a Twitter account where she shares movie-set stories and news from her life.

Natalie’s family members are actively engaged in social activism and participate in the work of the charity fund Make-A-Wish aimed at taking care of small children with fatal diseases and making their cherished dreams come true. Besides, the young woman participates in the projects “Save the Bay” and “Mermaid” that protect sea ecosystems and clean beaches of rubbish.

The actress lives in New York and spends her free time with her family. Natalie is fond of surfing which helps her keep fit: her weight is 55 kg., and her height is 165 cm. She also writes scripts and goes hiking with her dog Georgie. 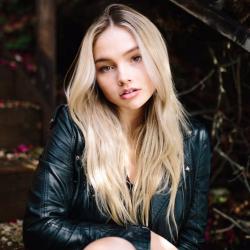