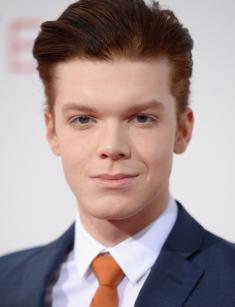 Cameron Monaghan is a young Hollywood actor who became the icon of the young generation after the roles of Ian Gallagher in the TV series Shameless and Jerome Valeska in the series Gotham. Besides, the actor appeared in other popular movies: Vampire Academy, Fringe, The Mentalist, Click, and The Giver.

Cameron Monaghan was born on August 16, 1993, in Santa Monica. His mother, Diane Monaghan, was single; she wanted to have a baby for herself and gave birth at 28. Soon after her son was born, she moved to Boca Raton. Cameron went to a kindergarten: the other had to work a lot. The family lived in a modest house and had several cats.

Cameron was an active child. He loved movies and even learned how to read thanks to subtitles. When he said he liked the cinematography, the mother started sending the boy’s photos to agencies; Monaghan was three years old at that time. At the age of five, his picture was published in a magazine cover; two years later, he was invited to a toy commercial.

Cameron attended schools for gifted children: the mother never doubted that her son was talented. After classes, the boy joined after-school groups and played soccer.

Although Diane was busy, she spent all her free time and weekends with her son; they visited theaters and movie theaters. Soon, Cameron started performing on the stage on his own. As the artist remembered in his interviews, he liked to give autographs until his hand got numb.

In winter 2002, Cameron followed his mother’s recommendation and went to Los Angeles to audition. However, he was not accepted. Two weeks later, an agent delivered the good news: producers took an interest in the red-haired, toothless, freckled boy. Thus, nine-year-old Cameron began his career.

For the next several years, the young artist was given only secondary roles; still, he had the opportunity to gain the necessary acting experience. Little by little, the situation changed: the young man started working in series and full-length movies that brought him some recognition. Cameron gladly talked to journalists and shared the secrets of his inspiration. The actor was pretty tall (5.97 ft. (182 cm.); soon, he got adult roles.

In the series Malcolm in the Middle, Monaghan played Chad and won the Young Artist Award. Brothers in Arms, Click, Dog Gone, and other projects followed. By 23, the actor had appeared in almost 40 movies and series.

The role of Ian Gallagher in the series Shameless is one of the actor’s best works. It is the story about a dysfunctional family: the father, who is an alcohol and drug abuser, brings up six kids. Cameron played one of the brothers, a gay young man who has bipolar disorder. As the story runs, it turns out that Ian’s uncle is his biological father: his mother had sex with him when she was high on drugs.

In 2014, the actor strengthened his positions as the icon of the youth and played in the popular series Vampire Academy.

The role of Jerome Valeska in the series Gotham increased the audience’s interest in the actor. At first sight, it was an unknown character; however, it was the predecessor of Joker, the iconic villain of the DC universe. According to the creators of the series, it was the story about Joker’s transformation into the mad clown.

In 2016, the actor had a secondary role in the drama series Mercy Street about the problems of a military hospital during the Civil War.

The same year, Monaghan voiced Jeff in the animated comedy Son of Zorn. It is the story about the intergalactic hero who lives in the animated world. Before that, Zorn lived among people. After ten years of adventures, the man decides to come back to his family. However, the warrior has to face some daily routine problems and realizes that the normal lifestyle and office work may be much more difficult than fights and deeds.

In December, the thriller Amityville: The Awakening was premiered. Bella Thorne played the main character, the young woman from a broken home. She lives with her single mother, a younger sister, and brother, James (Cameron Monaghan) who is in a coma. The family moves to the old house of ill repute to save the money and pay for the young man’s treatment. Belle notices some weird things; besides, the brother who was sick critically suddenly recovers. Thus, the main character looks for the truth about the mysterious house.

Cameron Monaghan is not married. He lives in Los Angeles, the same neighborhood as 13 years ago. The actor goes skiing and snowboarding in his free time; he is also engaged in boxing and plays the drums and the guitar.

The artist played the gay so authentically that fans started asking him about his orientation. Cameron made an announcement on his Twitter page: he played gays and considered himself to be straight. Since that time, Monaghan has not raised this topic. Nevertheless, there were many rumors about Cameron’s romance with his colleague Noel Fisher when the series Shameless was made.

Sometimes, Monaghan dates women. In 2012, he was frequently seen with Liana Liberato at parties.

Later on, the actor dated the English model Sadie Newman. The couple kept secret their relationship for almost two years; in summer 2015, they went out openly and posted photos on Instagram. However, the cold fall followed the hot summer. Cameron spent much time in Los Angeles, and his girlfriend was in New York. Eventually, the couple split up.

Soon after that, the paparazzi saw Cameron with Ruby Modine; the couple stopped hiding their romance. Today, the actors visit parties and social events together; however, they have not announced their relationship officially.

In summer 2017, the drama The Year of Spectacular Men was premiered; the actor received the role of Ross. In 2018, the Canadian drama Anthem of a Teenage Prophet was presented; Cameron personified Luke Hunter.

Soon, Cameron will voice Sergei in the animated movie My Love Affair with Marriage. Besides, he will play Andrew Taylor in the thriller The White Devil; by now, the actor remains the only member of the cast announced.

Monaghan was to star in the action thriller Wake; Bruce Willis was supposed to play the main character. However, Willis left the project in February 2017, and it was canceled.