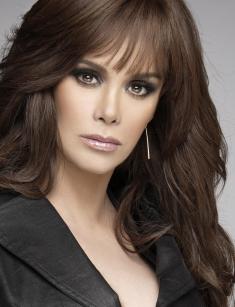 Lucía Leticia Méndez Pérez was born on January 26, 1955, in León, Guanajuato, Mexico. Her Father, Antonio Méndez Velasco, was a chemical engineer, and her mother, Martha Ofelia Perez was a housewife who devoted herself to raising the children. The girl spent her childhood on her grandparents' ranch.

Méndez began to show talent from an early age and was interested in cinematography and theater. Wanting to help the daughter's talent develop, her parents sent her to study at the Academy of Fine Arts. The teachers noted the creative potential of the girl, thanks to their support, at the age of nine Lucía became the host of the morning radio show, Larks. Her precious dream was a career on television.

After graduating from the academy, her father insisted that she should study in the United States majoring in philology. Lucía did not resist her father's decision and went abroad for several years where she learned to speak English fluently. The future star returned home being a certified interpreter and a teacher.

Having fulfilled her parents' will, Lucía Méndez decided to realize her dream and devote herself to acting. Her mother encouraged this endeavor and provided invaluable moral support to the future star of Mexican soap operas. In 1972, a theater director noticed the girl and offered her a role in his production. During the same year, Méndez received the award "El Rostro" meaning "the face" from the newspaper "El Heraldo" in Mexico City. Because of her participation in the play No Sex, We Are Innocent Méndez became known all over America, she received several prestigious prizes and was honored with her own wax figure in the Hollywood museum.

In 1972, Lucía Méndez made her debut in the television series Muchacha Italiana Viene a Casarse. She continued to participate in popular Mexican telenovelas, at the same time acting in commercials. In 1980, Méndez took part in the filming of the television series Colorina, in which she portrayed a vivid and unusual character for Mexican viewers, a prostitute. The songs for this project were recorded by the actress herself in collaboration with the Spanish songwriter Camilo Sesto.

Méndez became widely known for her role in the telenovela Tú o Nadie (English title: You or no one), produced by her patron Ernesto Alonso. Andrés García starred in the television series, and after the release of it he enjoyed international fame together with Méndez and became one of the main sex-symbols of the Latin American film industry of the 70s-80s. The audience perceived the acting duo as a unified whole, which was not surprising: García was a love machine; he was married three times and had 16 children.

The series was broadcast not only in Latin America but also in the United States, in Germany, and Commonwealth of Independent States. Méndez received the award for Best Actress from the Association of Latin Entertainment Critics, and her composition Corazón de Piedra, which became the soundtrack of the series, was nominated for the American Grammy Award for Best Latin Pop Singer.

In 1994, Lucía Méndez signed a contract to play in the telenovela Marielena produced by Telemundo television network; the series was filmed in the United States. However, according to the previously signed agreement with the Mexican television network Televisa, the actress was permitted only to take up projects produced by that company. The actress was forced to leave the show and return home immediately.

The success of the project Marielena, on which the actress worked together with Eduardo Yáñez, was so impressive in the United States, that the Mexican star ignored the threats of the owner of the channel and continued playing in the telenovela. So the name of Lucía Méndez got into the "blacklist" of Televisa television network for several years, and at that time almost all the media in Latin America belonged to this company.

In 1996, Lucía returned home and signed a new five-year contract with TV Azteca. In 1998, she reappeared on television in the series Tres Veces Sofía.

In 2008, the actress took part in the filming of the Latin version of the world-famous series Desperate Housewives - Esposas Desesperadas.

To this day, Lucía Méndez stars in television series. By 2016, she has taken part in more than thirty projects, most of which are popular and favorite long-running shows.

Lucía Méndez is also known as a talented singer. Juan Gabriel noticed her singing skills after the actress performed the song New Love for the film El Desconocido ("The stranger"). Together with the composer, Lucía Méndez recorded her first solo album, Siempre Estoy Pensando en Tí, which was released in 1975.

Since 1980, the composer Camilo Sesto (Camilo Blanes Cortés) has been writing songs for her. The album with his songs Sólo Una Mujer, released in 1984, enjoyed wide popularity among listeners. For this album, Lucía received the Grammy award for Latin Grammy Award for Best Singer-Songwriter Album.

In 1983, Méndez was awarded the title of Queen of the festival at the Viña del Mar International Song Festival.

The singer is incredibly famous at home and in the United States. Her albums received numerous awards, and her songs and video clips held the top positions of music charts multiple times. Even though Lucía performs songs exclusively in her native language, she has a lot of fans around the world.

During her 30-year musical career, the discography of Méndez has been replenished with 25 albums, including both original songs and compositions for television series.

In 2006, Méndez, being incredibly famous, launched her perfume line "Vivir by Lucía Méndez." Her line received numerous awards, and in 2013, came the second fragrance, "Aura." Besides, Lucía released a cosmetics line "Oxivivir de Lucía Méndez" based on liquid oxygen for adult or elderly women.

Méndez is the founder of a charity that specializes in helping children with hearing problems.

There were many love affairs and men in the life of Méndez. When she was eighteen years old, Lucía fell in love with her colleague from the set, the famous composer, Valentin Trujillo Gazcón. The actor proposed to the girl, but Lucía dreamed of an acting career and could not even think about family and marriage, so she turned down the composer's proposal. Trujillo married another girl eight days later. Lucía's heart was broken. She dedicated her first song "Siempre Estoy Pensando en Tí" (I always think of you) to her lover.

In 1985, the actress was in love with her colleague on the film Tú o Nadie ("You or no one"), Salvador Pineda. Their romance was beautiful and vivid, but it was short-lived.

On the set of a commercial for the Coca-Cola Company, Lucía met her future husband, director Pedro Torres. In 1988, the couple got married, and a few months later they had a son, Pedro Antonio. Her husband supported Lucía during the filming of the series Marielena when there were proceedings with Televisa television network. In 1993, the couple filed for divorce.

In 2004, Méndez got married again. A Cuban, Arturo Jordán, became her significant other. They had an incredibly luxurious wedding; it was attended by many famous people of Latin American show business. However, three years later the couple broke up. They had no children.

In February 2017, a traditional Super Bowl game of American football of the National Football League (NFL) was held. The superstar performed a musical piece during the traditional break of Super Bowl. This year, it was Lady Gaga who got the honor to sing at the main game in the American sport. The gorgeous program received a lot of positive feedback and one negative review.

On her Twitter account, Lucía Méndez wrote that Lady Gaga had copied her performance and accused the American pop-singer of plagiarism. Méndez received many negative tweets, but later it turned out that it had been just a joke. However, Méndez managed to draw a fair share of attention to herself.

Lucía had been preparing for the release of her own show, Lucía Méndez En Escena, which took place on March 30, 2017, in Mexico. Net worth is $40 million.