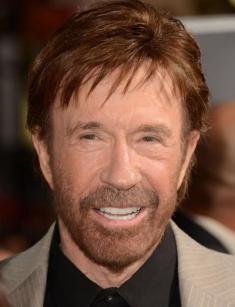 Chuck Norris (a real name - Carlos Ray Norris) is an American actor and martial artist. He became famous for filming in action films, as well as the role of Cordell Walker in the series Walker, Texas Ranger.

The famous actor of thrillers and martial artist was born in town Wilson on March 10, 1940. The boy was named Carlos Ray Norris from his birth. Chuck's grandfather was a true Irishman and his grandmother was a descendant of the Cherokee Indian tribe.

The childhood of the future actor was not happy. The father of the movie star worked as an auto mechanic, loved to drink, so the family often felt a lack of funds. As a child, Norris had to go through a lot of difficulties because there was not a normal housing of the family. Chuck's father, mother and two brothers of the future celebrity huddled in the trailer. When the actor was 16 years old, the parents separated formally. Then the mother met another man. His stepfather instilled in the young stepson a love of sports.

Growing up, Chuck Norris began to work as a loader but wanted to work in the police formally. After school, the guy immediately joined the air force. He went to South Korea in 1959. He was known as soldier Chuck on a military base.

Norris expected that the army would be "another planet," the unexplored world, which is inaccessible to many but the service turned out to be a boring and routine exercise in the end. Norris was seriously engaged in sports, first joined the judo club. So, he had the black belt by the time his return from the army.

In 1963 and 1964, two schools of karate Chuck Norris were opened, he created a network of similar schools throughout the United States later. The 25-year-old Chuck took first place in the championship of all stars, held in Los Angeles. In 1968, the wrestler won a title of the world champion in karate in light heavyweight, which Norris managed to keep for seven years.

The biography of Norris has many thrillers. The actor begins to work in the cinema at a time when the viewer requires more movies of this genre.

In the late 60s, Chuck Norris had an event in his life that changed his fate, the acquaintance with Bruce Lee, who helped to get a novice actor first role in the movie. His debut film was the work in the film The Wrecking Crew (1968). Later, Norris got the main role in the film Meng long guo jiang (1972), where Chuck played with Bruce Lee. In 1973, the friendship and creative collaboration were interrupted by the tragic death of legendary Lee.

Chuck Norris continued to act but American entrusted the role of a negative character in the low-grade Hong Kong action movie Huang mian lao hu (1974) after a spectacular debut. Having gained experience in film, Chuck realized that the actor's profession requires additional skills and decided to learn from professionals. Chuck Norris became the most adult listener in the acting school of Estelle Harman because the actor was 34 years old at that time.

Having skills and abilities, the actor appeared in the action movie Breaker! Breaker! (1977). The audience will recognize the photo of the actor and the American career was improved from that moment, the actor became a real star of Cannon Pictures. Movies with Norris in the title role began to appear one after another, among them A Force of One (1979), An Eye for an Eye (1981), Lone Wolf McQuade (1983), Missing in Action (1984), The Delta Force, Firewalker (1986) and others. In the early 1990s, Cannon Pictures went bankrupt but Chuck Norris continued to act.

In 1993, the actor accepted the offer of the channel CBS in the title role in the TV series Walker, Texas Ranger. His role of an advocate of crime made him more popular and the video battles, involving Norris attracted viewers. The viewers liked the show. The film had high ratings and the film was broadcast for eight years. There were films, where the actor plays his usual role in these years. The movies Hellbound (1993), Top Dog (1995), Forest Warrior (1996) and others were released.

Since the completion of the cult series, Norris starred in several films. The movie of William Tannen`s The Cutter was presented in 2005, was considered the last film with Chuck Norris. But in 2012, the actor appeared in the sequel to the action movie The Expendables. This film was the last work of the actor in the movie.

Roles and episodes in movies with Chuck Norris is an extensive theme for creating jokes. The invincibility of the characters of Norris was the reason for the development of memes that have long been loved by users of social networks.

"Facts about Chuck Norris" are Internet memes, in which absurd definitions are presented that illustrate the excessive force, possession of martial arts, as well as the attractiveness and masculinity of Norris. The comical nature of such images was appreciated by Chuck, commenting on such Internet popularity on his official website:

"I know about all sorts of statements about me, known as "Facts about Chuck Norris," which were appeared on the Internet and electronic mailings. I've seen some of them. Many of them are funny and unusual. I studied the Wild West more than the wild world of the Internet and I'm not quite sure how to understand that. It is completely unexpected to me. Of course, boys are always boys and I have no intention of taking offense or taking it seriously. Who knows, maybe these jokes will be an occasion for young people to learn more about my real life from the autobiographical book Against All Odds. They might even be interested in my novel The Justice Riders, which tells of the Wild West. I am very proud of this literary experience."

Fans are impressed by the physical data (the growth of Norris is 5,8 feet (178 cm)) because Chuck has not lost the ability to melee over the years, the actor still pays a lot of time to the sport and Internet memes is a "side effect" of his popularity, pursuing most Hollywood celebrities.

Chuck Norris lived in marriage with his classmate Dianne Kay Holechek for 13 years but their marriage ended in divorce in 1989. The actor decided to marry again almost ten years later. The passion of the American was a young actress Gena O'Kelley at this time, with whom Chuck met during the filming of Walker.

The actor had sons Mike and Eric from his first marriage. The second wife gave 61-year-old Norris son and daughter in 2001. The artist also has a daughter Dina, born out of wedlock. Chuck Norris supports relations with his children.

His fans and viewers, who love movies with their actor, wait for him around the world. His fans hope that their idol will appear in their area. The Ukrainian audience was lucky to remember and know the American movie star this time. In 2017, the media reported that Chuck Norris would come to Ukraine. The actor plans to speak at the World Missionary Conference. Chuck Norris has a net worth of $70 million.

This information was confirmed by the head of the Christian mission of mercy in an interview with the media. According to this information, the actor personally confirmed the intention to arrive in Ukraine to participate in the religious event.

In February 2017, Chuck Norris and his wife went on vacation to Israel. The photo of the American actor soon appeared on the pages of Israeli users of social networks.

Among the fans of the actor was the former director of the Israeli foreign Ministry Dore Gold. The official posted an image with Norris on his account on the microblogging service Twitter.