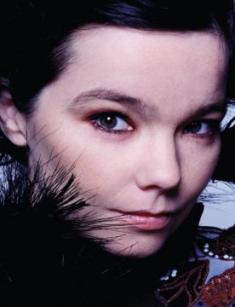 Björk is the legendary Icelandic singer, composer, and actress who won many prizes. Her works pertain to several genres and styles: alternative rock, indie pop, IDM, trip-hop, electronic, and a modern classic.

Björk Guðmundsdóttir was born in Reykjavik in November 1965. The woman has proved to be a successor of the Vikings: everybody is familiar with her uncontrollable temper, lack of complexes, and artistic nature. Her inner world correlates with her appearance: the elf-like height (5.35 feet or 163 cm.) and slightly slanted eyes, like those of an Eskimo.

The singer’s music mesmerizes and makes send bombs in a parcel: some fan did it actually.

The name “Björk” means “Birch”. The person with such a name could not grow up like someone ordinary. The girl’s mother was an aikido teacher, and the father worked as an electrician. They divorced when their daughter was three. Soon, the mother married for the second time; the stepfather contributed to Björk’s personal development significantly.

As the singer remembers, the man was a bright hippie who hated work and discipline; he could feed the girl with fairy tales day and night and amused her by various games. Björk’s feelings about the hippie community and her childhood years are ambiguous. It was absolutely normal to hear something like “Let’s paint his house with lilac butterflies!” or “For the next two days, we’ll eat only bananas”. It seemed funny at first, but then the girl was fed up with that.

Nevertheless, the hippie culture became a substantial part of Björk’s life. She learned how to survive in the wild nature, cook some game on fire, share her things with people in need, and live every day as if it were the last one. When the young woman earned her first money, she bought a tent and a sleeping bag.

Thanks to her mother and stepfather, the five-year-old child learned how to play the flute and piano; she mastered singing and playing the harp in a school orchestra. Nobody could be indifferent to Björk’s fascinating voice. When she was eleven, the stepfather and a music school teacher helped the young singer present her first album; the man created its cover himself. Suddenly, this work became platinum; it was the sign what Björk would do in the future.

The hippie culture taught Björk to see the world and music as a blank page where it was possible to pain anything. She started collecting sounds: the popcorn machine buzzing, the Los Angeles earthquake noise, the grandfather’s snorting, and even the noise of the fish processing at a plant.

Soon, charming and daring Björk mixed these wonderful sounds in something very special, from techno to jazz and classics. The Viking spirit added her magnificent voice there and got the songs that surprised, shocked, and awed people.

At 14, the teenager had her hair dyed bright orange and organized a punk group Spit and Snot. She was not interested in studies and quitted the school. Björk could earn her living: she delivered books, cleaned fish at a plant, and worked at coffee shops and hotels. She rented an apartment with her friend Didda. The girls bought second-hand clothes and had the same tattoos picturing a compass that helped them find a direction in their lives.

Björk had founded her direction long ago: music. She met some like-minded people and formed a group Exodus; two years later, the band was renamed into inappropriate Tappi Tikarrass and enjoyed much popularity. Britain viewed Björk as a merry elf and loved her; the home country was less enthusiastic: older people kept calling on television each time the singer appeared on the screen. There is little wonder in that: the woman was wearing ragged clothes, with a pillow tied to her belly.

In 1980, the singer founded the new group, Kukl; it transformed into The Sugarcubes later, and the keyboard player Þór Eldon became Björk’s husband for a short while.

The Sugarcubes were tremendously popular in Iceland, and the vocalist’s voice in all its varieties, from whispering to screaming, was more than recognizable. However, the group did not exist for a long time: the scandals between Björk and Þór put an end to everything. Still, those four years were fruitful: The Sugarcubes created five albums.

In 1992, the woman left the band; it was the time for reflection and lone art. She decided to see the world and show herself to it. Indeed, she had much to demonstrate. Music lovers were astonished: they had never listened to anything like that before.

In 1993, the single “Human Behavior” came out; it was the singer’s first solo work and the first collaboration with the British producer Nellee Hooper. Many people appreciated it, and Björk recorded the solo album Debut.

This collection sold out quickly; more than 2.5 million copies were sold. Debut was platinum in the United States; it was called the album of the year in Great Britain.

In 1994, Björk moved to Spain and presented the album Post; it made her an international star and became platinum in America, too. The British charts gave it the second position.

Critics named the 1997 album Homogenic the turning point in the singer’s career. She switched to a new music style, and music lovers believed it was the best electronic album ever; it was entirely different from Björk’s previous opuses.

The world loved Björk twice as much as before when she appeared in Lars von Trier’s Dancer in the Dark. The lead part and the soundtrack made the celebrity one of the most famous figures. Catherine Deneuve starred in the project as well; it won Palme d'Or at the Cannes Film Festival.

In 2001, the star pleased her fans with the new album, Vespertine, notable for a chamber orchestra, choir elements, and new electronic discoveries. The woman performed these songs in European and American opera theaters. Two million copies of the album were sold that year.

2004 was marked with Medulla; Björk’s vocal became the central instrument. Three years later, she released Volta and went to a large supporting tour. The collection of remixes for the song “Army of Me” entitled Army of Mixes was presented in 2005 to collect the money for victims of the destructive tsunami in the Indian Ocean.

In 2011, the long-awaited seventh album Biophilia came out; it surprised the audience again: Björk used computer technologies. It was the first album that included mobile apps. The Museum of Modern Art IN New York took it to its collection three years later. 2015 brought the new masterpiece, Vulnicura.

According to the singer, music is one of her priorities. She believes that a song can solve problems if a person happens to hear it at the right time.

Björk is included in Guinness World Records as the winner of three British Awards. The movie Dancer in the Dark gave her the Best Actress Award at the Cannes Film Festival; the woman gifted it to her friend. Many music videos of the singer are also iconic.

The first marriage to the musician and composer Þór Eldon did not last long. The son Sindri was born in 1986, but the couple was not happy: Björk and her husband were always quarreling. They split up after Dancer in the Dark was released.

The musician’s life changed when she met one of the most outstanding modern artists, Matthew Barney. Fans believed their favorite finally met the one who was just as unusual as Björk. The woman moved to her partner in New York; their daughter Ísadóra was born in fall 2002. Three years later, Björk played the main character in the movie Drawing Restraint 9 created by her husband.

Björk never plans anything. She is convinced that decisions should be spontaneous and based on feelings, moods, and intuition.

In 2014, the singer and the artist divorced; Barney began to date the painter Elizabeth Peyton. Rumors had it the relationship had started in 2009 when they worked on the exhibition Blood of Two. The ex-husband suited Björk and claimed she threatened their daughter’s mental state; however, he failed to deprive the singer of the child custody.

Björk’s personal stress manifested itself on the cover of the new album, Vulnicura: the singer was portrayed with a hole in her chest.

In 2012, the woman had to cancel her tour because of a disease. She seemed to have just a common cold, but it influenced her vocal cords: Björk had not treated an infection on time, and it gave her many problems.

The paparazzi have often complained about the musician’s behavior. In 1996, she attacked a journalist in a Thai airport: Björk believed the woman was hostile to her son. The celebrity does everything to protect her children from excessive public attention.

In one of her interviews, Björk said that fashion was like fascism for her: if a woman wore something old-fashioned, people would treat it as a severe crime. The star does not want to be a fashion icon; on the contrary, she gladly buys second-hand clothes. American journalists do not understand her approach and write nasty things as soon as they do not like what Björk is wearing.

In August 2017, the singer announced her new album on Instagram. The same year, the music video “The Gate” directed by Andrew Thomas Huang topped the list of best videos.

Utopia came out in November; Björk and the Venezuelan electro musician Arca. Critics’ reviews were warm and positive.