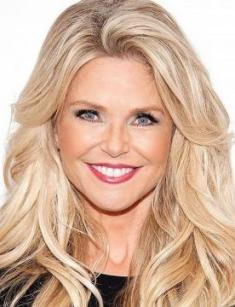 Christie Brinkley is a famous model, and time seems to have no power over her beauty. The 65-year-old celebrity looks much younger than her age and continues to participate in fashion shows and photo shoots. In addition to the runway walks, Christie plays in films, develops her own accessory line and shares beauty secrets in books and on television.

Brinkley was born Christie Lee Hudson in 1954 in Monroe, Michigan. Soon after the birth of her daughter, the mother married again. Her stepfather, journalist Donald Brinkley, adopted the girl and gave her his surname.

The family was wealthy, and Christie received a brilliant education. After graduating from a prestigious private school, she went to France to study art.

Brinkley began a modeling career by chance. Errol Sawyer, a famous photographer, noticed the attractive young woman in a post office and invited to a photo shoot.

The debut photo session was successful, and Sawyer introduced Christie to Nina Blanchard, who led Eileen Ford in Los Angeles. She was regularly offered to participate in photo shoots and fashion shows, and her career quickly took off. Soon Christie appeared on three consecutive Sports Illustrated Swimsuit Issue covers, which no other model had achieved before.

Brinkley concluded the first long-term contract in 1975, becoming the face of cosmetics brand CoverGirl. Their collaboration lasted for the following 20 years, which was the most extended contract in the history of the fashion industry.

In 1983, Christie made her movie debut. She got a small role in the comedy film National Lampoon's Vacation, in which Brinkley played with Chevy Chase. Twelve years later, the continuation of the film was released, and she willingly agreed to participate in the shooting. The celebrity also appeared in the music videos of Billy Joel and Mick Jones and hosted her own program dedicated to sports and healthy diet. In 2011 she played a leading role in the famous musical Chicago.

In total, during her career, Christie appeared on magazine covers, including Vogue, Glamor, Esquire, more than 500 times. In 2015, she released the book "Timeless Beauty," where she revealed her beauty secrets. The model often shares this information on her Instagram page.

Beautiful Christie has always attracted the attention of men, and her personal life has had a lot of torrid love affairs. She is a mother of three children and has been married four times, but all marriages ended with divorce.

The model met her first husband when she went to study in Paris. The marriage with artist Jean-François Allaux was a result of youthful love and was over rather quickly.

In 1982, it became known that Christie started a relationship with the heir to the Moët-Chandon Champagne fortune. Olivier Chandon de Brailles met the fashion model in New York City, in the famous club Studio 54, and could not resist her charm, however, these relationships were not destined to develop as the young man died in a car accident in less than a year.

Later, Christie married musician, Billy Joel. They met on the island of St. Barts in the Caribbean and got married two years later on a yacht on the Hudson River. Their relationship lasted ten years, and the couple had a daughter, Alexa.

The marriage broke up when Brinkley met businessman Richard Taubman. He proposed to his beloved woman when she was married, and Christie hastily filed for a divorce. They had a boy who was named Jack Paris Brinkley Taubman. The couple lived together for a little over a year.

The latest husband of Christie was architect Peter Cook. She gave birth to their daughter, Sailor, but in October 2008, the couple broke up. The divorce process caused a juicy scandal and attracted media attention. The model accused Peter of an affair with 18-year-old Diana Bianchi, pornography addiction, and physical punishment of the children.

The model is 5.74 ft. (175 cm) tall. According to Christie, her weight sometimes fluctuates, so her clothing size is from 2 to 6. Now she weighs 121.25 lbs. (55 kg). According to Brinkley, her genetics and a healthy lifestyle help her to stay young. She became a vegetarian at the age of 13, although she consumes dairy products and loves oysters. Besides, Christie does muscle-building exercises every day, practices yoga, and willingly goes surfing and wakeboarding during holidays and swims a lot.

In her younger days, the model was very passionate about her appearance and rarely tried beauty experiments. For a long time, she had long curly hair, and the fleecy unfastened hair was a distinctive feature of her image (however, the model admitted in an interview that she used hair extensions to create volume), and only at the age of 62, she decided to have a haircut.

Christie Brinkley loves to show her beautiful figure and wears short skirts and plunge neckline dresses. Sometimes the model is criticized for the outfits that are not age-appropriate, for example, tight jeans or overalls, but she does not consider it a problem. The woman is not embarrassed by too much attention.

The celebrity says that she has not undergone plastic surgery to stay young and beautiful, but she has nothing against skin rejuvenating treatment. However, experts claim that people can see traces of plastic surgery in her pictures without make-up, but at the same time, they add that the procedures are of high quality. The photos of the young model differ little from her current pictures without Photoshop.

According to Christie, she repeatedly got Botox injections but refused them after the stuff began to limit her ability to make full facial expressions. The prominent cheekbones of the model are the result of using fillers, and a well-defined sharp jawline, which is not typical for her age, is most likely a result of a facelift.

In February 2018, the model celebrated her 64th birthday. She still appears on the covers of magazines and amazes fans with her freshness and beauty. Christie has recently posed for Social Life magazine, and she wore a bikini and other bold outfits for the photoshoot.

“She looks phenomenal,” S.I.'s Senior Editor, MJ Day said. “She has the legs of a 30-year-old and the face of an angel.”

Christie Brinkley has an estimated net worth of $80 million.