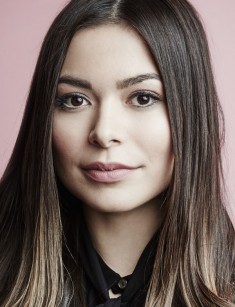 Miranda Cosgrove is an American actress who has gained wide popularity among youth after her appearance in the popular picture School of Rock. The talent of the beautiful young girl isn't limited only with the acting skills, her fans also know her as a great singer.

Miranda was born in Los Angeles, in California, in the spring of 1993. Her parents are Christine and Tom Cosgrove. When the girl was very little, her parents already knew that in their family there was growing up a future actress. She always enjoyed singing and dancing and always gave performances at home.

Once being still very young Miranda performed on the stage of the restaurant in her native town. Her charming manner of singing and absence of shyness attracted a lot of people to this place.

Among the guests there also was an agent who noticed the girl's talent. He was looking for the appropriate candidate for the shootings in the advertising. The agents had talked to the girl's parents and concluded the agreement with them. After this, the actress began to appear in her first shootings.

In childhood, the girl took part in some TV advertisings, and during some time he was engaged in the modeling. However, he work didn't consist of the commercials only. Having chosen the right and interesting direction, Miranda went to many auditions for the roles in the movies and series.

Cosgrove received her first remarkable role in 2003 at the age of thirteen. The girl took part in the popular at that time comedy School of Rock in the role of Summer Hathaway. This movie has earned $130 million all over the world and was appreciated both by the critics and audience. The beginning actress also gained some fame.

The girl learned about the series Drake & Josh when she was in New York and was engaged in the shootings of the comedy School of Rock. The day before she attended the audition and a little bit later she was approved for one of the roles in this series. The series was broadcast on Nickelodeon kid channel and at once began to have thousands of little viewers. A couple of years later there were released the sequels – Drake & Josh Go Hollywood, Drake&Josh in New York and Merry Christmas Drake & Josh.

The movie Keeping Up with the Steins which came out in 2006, the series Unfabulous and Zoey 101 released 2007 became the next projects in the girl’s filmography. The same year Miranda started to take part in the series under the title iCarly which has brought her great success.

In 2008 the girl became engaged in the composing and recording of music and the release of the albums. However, she managed to find time for the shootings in the movies and also voiced-over some characters. In 2010 Cosgrove took part in the series The Good Wife and voiced-over the character of Margo in the animated cartoon Despicable Me and also in the following parts of this animated series which came out in 2013 and 2017.

Miranda became engaged in the music already at the peak of her movie career. Cosgrove has performed the main song of the series iCarly together with Drake Bell who worked with the girl in the series Drake & Josh. This single was recorded at the end of 2007, and in a short time, this composition achieved the first lines in Billboard charts. And in 2008 under Columbia Records label there was released the disc with music and songs of this picture. Cosgrove has sung four compositions - "Stay My Baby," "'Headphones On," "Leave It All to Me" and "About You Now."

The spectators of the series and critics have appreciated the girl's vocal abilities and songs, that's why later the compositions "Stay My Baby" and "About You Now" were released as separate singles. And if the first track hasn't excited the fans greatly, the second one occupied first positions in Billboard charts. From that moment on MTV there began to talk about Miranda as about a singer, and a year later she recorded a solo single – the expanded version of "About You Now" song.

Cosgrove’s debut album on which she was working since 2008 was released only in 2010. It received the title "Sparks Fly," and it included the songs "Hey You," "BAM" and also "Kissin U" which the listeners really liked. In 2012 there was shot the video on the composition "Kissin U."

First Miranda’s album has received positive feedback from her fans, and many of them even said that they saw the similarity of Cosgrove with Miley Cyrus and Avril Lavigne. The girls' music was popular not only in the USA but in Germany and Austria as well. The new singer's album under the title "High Maintenance" came out in 2011. This album included only five songs and was published by two labels at the same time - Columbia Records and Epic Records.

In 2008 in mass media there appeared the information that Miranda was meeting the actor James Maslow. Probably, they got acquainted on the movie set of the series iCarly where the young man received the episodic role. The relationship of the young people lasted till 2010.

At present little is known about the personal life of the actress. Though, none information about the fact that she has a husband and children has appeared in the press. Moreover, it's unknown if she has a boyfriend. Besides, this information also doesn’t appear on her Instagram personal page where the girl publishes her photos, old pictures with her family, shots from her holidays and working processes. At the same time, Miranda doesn't share frank photos in swimsuits or underwear with her subscribers, but fans can easily find such photos on the web.

Despite her busy working schedule, the girl tries to pay attention and highlight the social problems. She is engaged in the charity work. She helps sick children and quite often visits the hospitals.

Cosgrove keeps in good shape having the height of 168 cm and the weight of 52 kilos.

In October of 2018, there appeared the information on the web about the death of Miranda Cosgrove. The news that the actress died on the 23rd of October was published on the page under the title R. I. P. Miranda Cosgrove in Facebook. This news caused panic among her fans. Her admirers expressed condolences to Miranda's family and their sorrow about it.

The publication has collected nearly one million likes, but some fans of Cosgrove have had doubts about this news. Next day this post was disproved by the actress’s official representatives. Also, they appealed to people not to trust everything that is published on the web and announced that the girl was safe and sound. The girl’s name was included into the list of celebrities who became the victims of false information.

Meanwhile, Miranda continues to take part in the projects. On the 24th of September, 2018 there was premiered the song video - Marshmello Feat Bastille - "Happier" in which the actress appeared in the major role of the teenage girl. 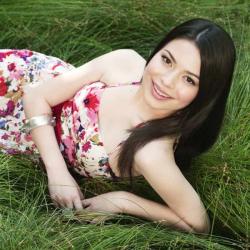