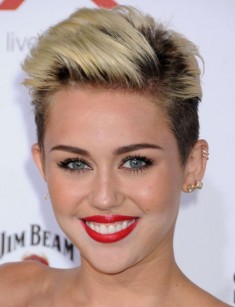 Miley Cyrus is a popular American singer and actress. She became famous after playing the role of a young pop singer in the youth series "Hannah Montana".

Miley Ray Cyrus (born Destiny Hope Cyrus) was born in November 1992. The girl appeared in the family of Billy Ray Cyrus, the country singer. Parents gave the daughter a prophetic name: Destiny Hope translated as "fate" and "hope." And the baby was nicknamed Miley - smiling.

Miley has an elder brother Trace and a sister Brandi. After the birth of Destiny Hope, parents finally got married. Billy Ray adopted the elder children of his wife. Later the younger children Braison and Noah were born.

Miley had a happy childhood. Her godmother is the famous singer Dolly Parton, and grandfather Ronald Ray Cyrus was a famous politician (died in 2006). The girl grew up on a farm in Tennessee, where she went to school.

The family moved to Toronto when Miley was 8 years old. They had to do this step as in Toronto Billy Ray was working on a multi-episode film "Doc". As Miley Cyrus later told, she became interested in acting when she came with Dad on the set of the film. And finally, she understood that she wanted to be an actress when her father took her to see the popular musical "Mamma Mia!" Soon, Miley began attending a theatre studio in Toronto, where she studied not only acting but also singing.

The young actress made her debut playing a small role in the film "Big Fish". The creative biography of Miley Cyrus began with the role of Ruthie.

4 years later the 11-year-old actress participated in the casting of the film "Hannah Montana", produced by "Disney". This film tells about a girl who simultaneously has two lives: a schoolgirl with typical teenage problems and a singer Hannah, the idol of millions of teenagers.

Miley hoped to get the role of a girlfriend of the main character. But after meeting with Hollywood producers, Cyrus was given the main role. Miley got the central the central role in the film not only because of her persistence but also because of her excellent vocal skills. Her mother became the agent of Miley Cyrus.

The series "Hannah Montana" became a hit immediately after the release, and the young actress Miley Cyrus became the idol of American teenagers. In addition, the young actress immediately turned into a very rich teenager. In 2007, its sequel was released. In 2008, Destiny Hope Cyrus officially became Miley Ray Cyrus.

In the same year, the singer and actress went on tour. It became a new film-concert "Hannah Montana and Miley Cyrus: Best of Both Worlds Concert".

In 2008, Miley topped the list of the richest people among children under 16, according to Forbes magazine.

In early 2010, Cyrus began acting in the last season of the series "Hannah Montana". In the spring of 2010, the actress made her debut in the feature film "Hannah Montana: The Movie".

After filming in "Hannah Montana", the singer focused on her film career. Cyrus appeared in the main role in the melodrama "The Last Song”. This film was supposed to be for a more adult audience than the audience of the series about Hannah. In the interview, the singer admitted that initially, the directors did not believe that Miley would cope with the role since the girl had experience only in the youth serials.

The premiere of "The Last Song" was held in the spring of 2010. In 2012, Cyrus played the main role in the Hollywood remake "LOL" (or Laughing out loud), where Miley played along with Demi Moore and Ashley Greene.

In the same year, Miley Cyrus played the main role in the comic thriller "So Undercover." The actress began to participate regularly in entertaining TV shows. She appeared in the "The Ellen DeGeneres Show" and in the program "Jimmy Kimmel Live!"

Music career of Miley Cyrus developed in parallel with the acting career. When the girl began to sing, her mother on the advice of her friend and godmother of Miley – the singer Dolly Parton - immediately signed a contract with the famous Jason Morey.

Miley recorded her debut single for the film "Hannah Montana". The second song of Cyrus, "Zip-a-Dee-Doo-Dah" is a cover version of the composition by James Baskett.

In 2006, Miley Cyrus recorded 9 compositions for the album. It consisted of the soundtracks of the series "Hannah Montana". The disc immediately became popular and was sold out in huge numbers.

In 2007, when the series was released, Miley signed a contract with Hollywood Records for 4 new discs. One of the albums became platinum three times.

In 2008, a new disc "Breakout" appeared. It was the debut solo album of the singer. There is no image of Hannah Montana anymore. The record immediately won Australian, Canadian and, of course, American charts. At the end of the year, there was a platinum edition of the album, which included two new songs.

The compositions in the new album were dedicated to the first love of Cyrus Nick Jonas, the soloist of a boys-band "Nick Jonas".

In 2009, the singer published her own biography, in which she told about her childhood, filming in the series and her road to fame. The book was called "Miles to Go".

In 2009, Miley Cyrus released the mini-album "The Time of Our Lives". The title track of the album was the soundtrack to the melodrama "When I Look at You". After that, Cyrus went to the tour "Wonder World Tour" and gave concerts to support her two new albums.

In the summer of 2010, the singer presented a new album called "Can not Be Tamed".

In April-July 2011, the singer went to the world concert tour "Gypsy Heart Tour", which covered Central and South America, the Philippines and Australia.

In 2012, the singer told about the change of image. Cyrus’s hair became blonde and short. She had a bright make-up with red lipstick and wore short clothes. According to the singer, Miley changed the style to show the fans that she grew up and is not a teenage girl anymore. The fans noticed an excellent body of the singer (height 165 cm, weight 48 kg).

At the same time, some of the singer's fans were unhappy with the changes in the appearance of Cyrus. Fans claimed that the girl lost her personality and charm, and also became too cheeky and vulgar.

In 2013, the singer took first place in the rating of "100 sexiest women of the planet", according to the men's glossy magazine "Maxim".

In the same year, Cyrus's new single "We Can not Stop" was released. The composition took the sixth place in the rating of "Billboard Hot 100". After the performance of the singer with this single at "MTV Video Music Awards 2013", in one minute 306 thousand mentions of the singer appeared in "Twitter". It was a record.

In August 2013, Miley Cyrus presented the song "Wrecking Ball", which became the first song of the singer which took the first place in the rating "Billboard Hot 100". In September of the same year, a music video for this song was released. The hype around the video clip was bigger than the success of the song. In the video "Wrecking Ball", the naked Cyrus sits on a ball that destroys the walls. The video got 100 million views on YouTube in seven days.

On October 8, the fourth album of the singer "Bangerz" was released.

In February 2014, the singer began a tour in support of the album. The tour was filled with scandals and strange behavior of the singer. Some concerts even received a rating of 16+. During the performance in Los Angeles, Cyrus kissed Katy Perry. Perry admitted in an interview that it was unpleasant.

In May 2015, the singer, along with Ariana Grande and Joan Jett launched the charity project "The Backyard Sessions".

In the same year, the singer was chosen as the host at the MTV Video Music Awards. Parents Television Council expressed dissatisfaction with this choice but the TV channel rejected the claim.

At the end of August, the singer presented her new album "Miley Cyrus And Her Dead Dead Petz", free of charge for download.

Personal life Miley Cyrus is a "Klondike" for journalists. Three years the girl was dating the actor Liam Hemsworth, whom she met on the set. In May 2012, the couple announced their engagement. Miley appeared with a diamond ring. But in September of the next year, Miley and Liam broke up.

Another news of this period was the singer's quarrel with her colleague Selena Gomez. The former friends quarreled because of the fact that Cyrus began to flirt with Justin Bieber, who recently broke up with Gomez. Since that moment, the girls dislike each other and make parody photos.

In 2014, the tabloids were filled with information and photographs confirming the singer's affair with Patrick Schwarzenegger, the son of the famous actor Arnold Schwarzenegger. But this relationship lasted less than a year.

And in the summer of 2015, there appeared scandalous news about the relations of Miley Cyrus with a model from the US Stella Maxwell. At the same time, the singer did not confirm the information but stated that she was indeed bisexual. A little bit later, in an interview with Elle magazine, Miley added that she is a pansexuality. It is not important for the singer the biological sex of the partner as well as the gender.

The singer does not hide that she supports the LGBT community. She placed a rainbow symbol of sexual minorities on the avatar of her "Instagram". The singer has a popular account with 69.2 million followers.

On September 30, 2016, Miley Cyrus appeared in the main role in the television project "Crisis in Six Scenes" by Woody Allen. In the same year, the singer acted as an advisor in the tenth season of the show "The Voice". In the eleventh season, Cyrus appeared already as a mentor.

The singer continues to sing and record new compositions. Today she is working on the sixth album, the first tracks of which have already been recorded and launched into the rotation. In autumn of 2017, the singer will return to the show "The Voice". In the thirteenth season, Cyrus will join the judges. 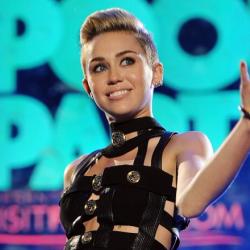