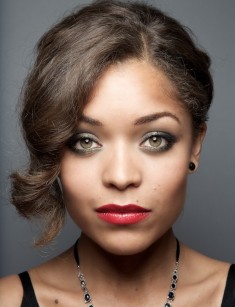 Antonia Thomas is a British movie and theater actress who has become famous due to her role in the series Misfits. Her character was remembered to the audience by the non-standard superpower which distinguishes even on the background of other character's strange talents– Alisha Daniels could manipulate the pheromones.

Antonia-Rose Laura Thomas was born on the 3rd of November of 1986 in London on. In her family, except for the girl, there were two more children: Chloe Lucy Thomas is a professional journalist, and Emma Jay Thomas is also an actress as well as her sister.

Antonia has mixed descent: her mother came from Jamaica, and her father David Thomas is an Englishman. Though the majority of English people follow the Anglican religion, the family of Thomas is Catholics.

After the completion of the studies at school, the girl studied at Bristol Old Vic drama school. After she had graduated in 2009, she joined the National youth theater. Moreover, since childhood Thomas was fond of painting and finished the course at Central Saint Martin’s College of Arts and Design

For the first time, still being a student, Antonia appeared on the screen in 2008 in the short-length movie My World. And the next day after the release the girl successfully passed the audition to the British series Misfits in which she was engaged during three seasons.

Antonia says that she was extremely lucky that the creators of the project decided to risk and to give a chance to the beginning actress. All the characters of Misfits series are a metaphorical representation of the problems of youth, and Alisha embodies the image of uncontrollable sexuality. And the promo-photos to the series in which the girl appears in a swimsuit prove that. To be more precise – the girl wears the top from the swimsuit, and the bottom of the outfit is represented by a little-lowered jumpsuit of the girl sentenced to the community service.

In the beginning, the director saw Alisha as an ordinary and straightforward character, but Thomas has made her personage much more complex. In her embodiment the typical "popular girl" has received the quality not characteristic of her type – she has become vulnerable.

The series, and especially its first three seasons, were extremely popular at the audience and even received numerous positive reviews and praise of the movie critics. In 2010 the series Misfits received BAFTA Awards. The role performed by Thomas has received recognition of the admirers of the series. Moreover, in 2011 the series got the nomination at Monte-Carlo Television Festival.

After that Antonia repeatedly took part in the British series and movies, and she had her next breakthrough in the filmography in 2014. Thomas started participating in the shootings of the series Lovesick which is a comedy sitcom with a juicy premise.

In this series, Thomas performs the role of the girlfriend of the leading character who, was diagnosed with chlamydiosis, and had to remember all women with whom he had had sex. Antonia's personage, Evie is a girl who was in love with the main character for a long time. Though, after all, she decided to live further and even engaged with another man. However, as it always happens, everything’s not as easy as it seems.

In 2015 the actress took part in the renewal of Teletubbies – a well-known English project for children. Because of the new trends in this series, there appeared the cell phone which was voiced-over by Antonia.

In 2017 Thomas got a steady role in one of the most successful American series of the year – in the medical drama The Good Doctor directed by David Shore – the creator of House, M.D.

The series tells about the difficult subject of adaptation in the society of the autistics. Antonia's character is absolutely controversial to the leading character: she isn't only emotional, but she is able to rule her emotions and to use to benefit. That’s why the autistic Dr. Murphy often addresses her with the questions about the interaction with people.

Antonia has inherited vocal abilities from her father, who is a professional bass singer. So, the girl has a mezzo-soprano. Besides the talents, the girl has a gorgeous figure –being 155 cm tall Antonia weighs 49 kilos.

During the shootings in the series Misfits, the admirers of the actress discussed the girl’s possible love affairs with the partners on the movie set. Mainly the fans thought that Antonia was meeting Iwan Rheon who later gained greater popularity due to his role of Ramsay Bolton in Game of Thrones.

Though, these rumors about the personal life of the actress weren’t confirmed. In 2016 Thomas announced that she had a boyfriend. The girl didn’t announce the young man’s name officially but judging with the photo on Instagram one could assume that it was the photographer Michael Shelford.

The girl confesses that she would like to get the roles in historical series and movies based on Shakespeare’s literary works. But her nationality doesn’t allow her to receive such roles as dark-skinned personages seldom appear in such projects.

At present Antonia Thomas is still engaged in the series The Good Doctor. Moreover, in 2017 Antonia performed the main role in the thriller Rearview, and in 2018 she appeared in the series under the title Snatches: Moments from Women's Lives. The actress took part in the first episode of the show and performed the role of the pregnant woman who was pursued in the social networks. The movie mostly contains monologues of Thomas's character including the reflection about the world to which she will bring her child. 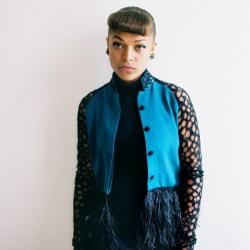