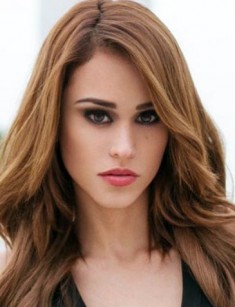 Yanet García is a Mexican TV host and model who has become popular for her gorgeous figure. She is a weather girl on the local television. The releases with the appearance of the model gain huge popularity at the audience even at those people who aren’t interested in the weather at all – the girl looks extremely tempting in the fitting dress.

Yanet Cristal García San Miguel was born on the 11th of November, 1990 in the town of Monterrey, the capital of the State of Nuevo León. Yanet is a Mexican. There is little information about the early ages of her biography and relatives. It’s only known that her mother’s name is Anny Sanmiguel and she has a younger sister Alondra.

Yanet is a journalist by her specialty. Moreover, since the age of fifteen she became engaged in the model career, and in 2013 she took part in the beauty pageant, Miss Nuevo León.

Right after Yanet received the diploma, she got a job on the television. The position wasn't very remarkable – she got the job of the weather girl on the local Televisa Monterrey channel. Then nobody could even think that such short appearance on the air would bring to the weather girl such huge popularity. The stylists chose delicate fitting dresses for the girl, and she intentionally appeared in front of the cameras in a half-turn to the camera so that the spectators could see her magnificent bend of hips. In a short time, the whole country began to watch the weather broadcast releases, and the number of her subscribers on her Instagram account reached 6 million.

Except for the job of the weather girl Yanet also often takes part in the commercials. Since the age of twenty, she directs her own model school in her native town of Monterrey. The girl has created her own collection of swimsuits and lingerie called Yanet García Collection.

Yanet is a rather tiny girl ( she is 168 cm tall, and she weighs 58 kilos), but with such body type, she has unusually magnificent buttocks. She is often compared to the celebrities, Kim Kardashian and Jennifer Lopez.

The model has a blog where she shares the secrets of keeping in shape. García goes to the gym at least 3-4 times a week, and spends 1-1.5 hours for training and pays special attention to the workout for her buttocks. She trains not only in the gum but in the fresh air as well. To have a flat stomach the girl advises to do more twisting and for the hips – swoop and sit-ups.

The host keeps to the diet which excludes sweet. In general, she eats vegetables and proteinaceous products. Rarely she affords herself to eat something high-calorie from the Mexican or Italian cuisine. However, she strictly controls to work out in the gym what she has eaten. Yanet’s favorite delicacy is popcorn with salsa. She adores eating it while watching the movies. Even going to the movie theater she takes with herself the packet of sauce (the truth is, that the girl does this very seldom).

On the web, there is information that Yanet's buttocks aren't the result of the training and the diet, but of buttock augmentation. This is the special surgery for the correction of the outlines with the help of the implants. Though, she categorically denies the fact of having any surgery.

Experts note that the genetics play the considerable role. The Latin Americans, in particular, Mexican and Cuban women often have such types of figure. So, it's almost impossible to begin to have such buttocks just visiting the gym.

Yanet has never been married. It's noteworthy that till the recent time she has been in relations with Douglas Martin – the professional cyber sportsman, the player of the game Call of duty, who is also known under the pseudonym Censor.

Their relations have started when the young man found on the web the video with Yanet and published it in his account on the social network and signed that he fell in love. The host could not notice this message if it were not for Martin's admirers: they wrote lots of letters to Yanet with requests to go on a date with their idol. The girl has subscribed for the gamer's page, and after a short communication with him, she agreed.

Douglas shared her interest in the fitness, and they often posted their joint pictures from the gym. In 2017 the couple appeared together in the movie Sharknado 5: Global Swarming. According to the plot, there was a tornado in the USA, and it brought blood-thirsty sharks with it. The movie which has become a sequel to the sensational humoristic catastrophe movie received very low reviews of the spectators and critics. Though, Yanet really liked her experience in the movie.

In 2018 it became known that Martin and Yanet parted. Douglas admitted that the reason for their parting was the impossibility to combine personal life with the career. Before the preparation for the next Call of duty tournament, he announced to his fans about the end of the relations with Yanet on Twitter and even recorded the video about this on Youtube.

García refused to comment on details on the separation and the fact why her boyfriend left her. She just published a small post on her page where she told that her heart was broken.

At present García continues to host the weather forecast and she doesn't plan to leave this occupation. She belongs to the range of highly paid journalists, and foreign sources estimate her wealth in $3 million. The Playboy magazine called the young woman one of the most seductive TV hosts in the world.

In 2018 the model took part in the shootings for Mexican Men's magazine. The frank photo of the girl in the underwear appeared on the cover of the magazine.

Yanet is interested in the self-development and reads many books about this. In her next plans, she wants to complete the courses of the make-up artist: the girl has a serious attitude towards this art, and she doesn't appear in public without make-up. Moreover, García has a burning desire to master the hairdresser's art and to become a professional stylist. Also, she has liked to play in the movies, and in the future, she hopes to realize herself as an actress. 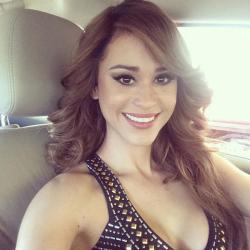