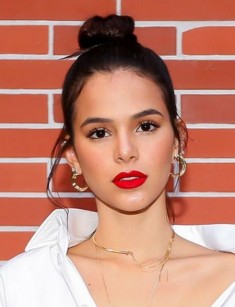 Bruna Marquezine is a well-known model and the star of the Brazilian series in which she began to take part in early childhood. Due to this, she has gained great popularity in her native country. However, the name of the hot gorgeous girl is also widely known in the football world. The girl was a girlfriend of the captain of the Brazilian national football team – Neymar. Her fans joke that the love affair of the couple who broke up and reconciled many times corresponds to the best traditions of the Brazilian series.

Bruna Reis Maia was born on the 4th of August, 1995 in Rio de Janeiro. Her father Telmo Maia, a carpenter, has Italian roots in his family tree. It was the paternal grandmother’s surname of Joanina Marquezine which the girl later took as a stage pseudonym. Bruna’s mother Neide Maia is a housewife; she has the African and Portuguese background. Bruna has a younger sister Luana who was born in 2002 who also became the actress.

The parents learned quite early that their elder daughter has acting skills: the girl has always been extroverted what was appreciated by people around. Moreover, she didn't hesitate to appear in front of the photo and video cameras. At the age of five, the girl by chance found herself at the rehearsal of the fashion display, and she confidently appeared on the podium, imitating the models. After that Neide sent her daughter to the model school, and after this, the girl attended children's acting school at TV Globo company which is the most eminent producer of the series Brazil.

Bruna had her first experience on the television as a co-host of Xuxa – the well-known Brazilian TV host of children's programs. In 2002 the girl was chosen among the hundreds of young models for participation in the awards ceremony of the winners at Cannes Film Festival.

She considers this event a starting point of her model career. And the following year was the beginning of her career – the eight-year-old Bruna for the first time got a big role and appeared on the screen in the series Women in Love which is well known to the audience.

"My character has many emotional scenes, but I don't take any efforts to start crying, I need a couple of seconds to do this after the director asks me to do it. I was even an example for the adult actresses", - Bruna remembers her first role with a smile.

For the role of the orphan Salete, the little actress in 2004 received the award "Contigo!" ( which is considered to be the Brazilian Academic Awards ) Most young and talented dramatic actress.

Cinematography and model business are two spheres in which Bruna Marquezine is engaged, and she combines it successfully. From the little girl with the angelic face, she has transformed into the long-legged beauty who is 170 cm tall and weighs 62 kilos. For the participation of the Brazilian actress in the advertising campaign, the fashion houses and brands are ready to pay her huge fees. And Bruna who was born and grew up in the modest family is going to accept such propositions.

The celebrity advertises clothes, footwear, swimsuits, cosmetic brands, and jewelry. She took part in the campaigns of the following brands - Bicho Comeu, TDM, GlitzMania, Pestalozzi, SendaS, MC Donald's and Turma da Mel. The actress is the official face of the latter company. The glamorous photos of Marquezine repeatedly appeared on the covers of the following magazines - Vogue, Cosmopolitan, Glamour, Harper's Bazaar (Brazil).

After the successful role of Salete, the actress has become very demanded at the directors. The TV series América (2005) in which Bruna played the part of the blind girl – Maria Flor has become her next remarkable work. The critics also noted the role of Lurdes performed by the actress in the series Snakes & Lizards (2006).

Marquezine considers one of her favorite role the character of Luiza in the TV series Em Família (Helena's Shadow) (2014). Bruna performed the role of the girl who begins to have romantic relations with the first and only love of her mother, Elena.

The actress has in her filmography tens of movies and series. The actress was more than once nominated for the prestigious Contigo Awards and got many honorary prizes (Tiradentes medal, ABL diploma, and others). Moreover, the actress appeared on the television in the show Dancing with the Stars (2013) in which she took the second position.

Bruna Marquezine was seventeen years old when she got acquainted with the football player Neymar. The young people met during the Brazilian carnival in 2012. Neymar was twenty at that time, and he already was a player of the national team and had a one-year-old son David Lucca. However, the forward perspective player was single. That's why the girl accepted the courtings of the loveful sportsman and their feelings were mutual.

The couple broke up in 2014 after the FIFA World Cup in Brazil. The girl wasn't single for a long time and began to have a love affair with her colleague –the model male called Marlon Teixeira. Later, the paparazzi captured the beauty in the embraces of the actor Maurício Destri. The star couple hasn't commented on their relations in any way.

In 2016 Neymar and Marquezine again began to have relations. It wasn't necessary to prove something: the eloquent picture in the tabloids demonstrated to the world the vacation of the couple on her native Brazilian coast, joint walks in European towns. But in a short time, the same year her admirers were disappointed by the news that the couple parted. This had happened before the forward left Barcelona F.C.

In 2017 the tabloids published that the couple not only reunited but Neymar proposed to the actress and presented her the long-awaited ring. But the obstinate beauty didn't accept the proposal of the lady-killer, explaining that she didn't want to take a break in her career which began to take off.

In 2018 the sources wrote that couple reconciled and in the summer she celebrated her wedding on Fernando de Noronha island. But, giving the interview in the latest issue of Brazilian Vogue the model told that she has broken up with Neymar. The model’s admirers can only guess how her private life will develop in the future.

In 2018 on the Brazilian television there was broadcast the TV series God Save the King which tells about the events which take place in the fictional medieval Kingdoms of Montemor and Artena. Marquezine appears in one of the major roles – the Queen Catherine of Lurton. 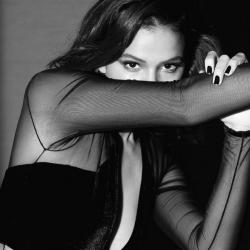