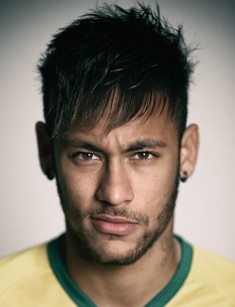 Neymar is a Brazilian football player, striker of the Catalan club Barcelona and the Brazil national team.

Neymar was born in Mogi-das Cruzes, Brazil. Neymar Santos, the father of the future celebrity, was a football player in the past, and when his son was born he was selling jewelry. Nadine Santos, the mother of Neymar, was a housewife. Neymar has a younger sister Rafaella.

Soon after the birth of his son, the family moved to San Vicente. When Neymar Jr. grew up, he began to show interest in his father's favorite sport. The head of the family became the first football coach of the future striker of Barcelona. He taught the boy the subtleties of the game of millions. In 2003 Neymar went to the children's academy of Santos football club, and the family changed the place of residence again. The family moved to Santos, which is consonant with the name of the team and their own surname.

The success of the boy on the football field was so vivid that a 14-year-old teen was invited to the youth academy the Spanish grand - "Real Madrid ". But “Santos” made everything possible to keep the player at home. Since then, the player began to earn good money, which allowed the family to buy their own house.

Neymar career in the club

At 17, Neymar signed his first professional contract with the club "Santos". Already in the second match for the main team, the young player scored the first goal in big football. His sports career began.

In 2011, Neymar was awarded the FIFA award named after Ferenc Puskasha, which get the player who scored the most beautiful goal. This prize went to the forward for his incredible ball into the gate of "Flamengo". Before the last hit, Neymar alone won the opponents. The video from this game is still remembered by the fans.

We can’t say that the striker has special physical abilities (the height of Neymar is 174 cm, weight is 68 kg), which help him to work miracles on the field, but, according to the football analysts, Neymar plays at a high level.

In 2011, the 19-year-old was recognized as the best player of Brazil and South America. Neymar was nominated for the "Golden Ball".

In 2012, Neymar was noted for a large number of hat tricks. At the end of the year, the player was awarded the rare award "For an outstanding game". Only Pele, the legend of Brazilian and world football, was given this award.

The world football clubs were interested in the young football player. The representatives of Madrid "Real", London "Chelsea", Turin "Juventus", as well as "Milan" and "Manchester United” wanted to get Neymar. London "West Ham", Makhachkala "Anji" and Moscow "CSKA" also tried to get the player. Only “Barcelona" paid € 50 million for the transfer of the striker. It is interesting, under the terms of the contract, most of the money got not “Santos”, but the father of the player who was the agent and manager of the forward at the time.

Neymar scored the debut goal in the game for the Spanish Super Cup in the gates of Madrid "Atletico". The player needed 6 minutes after the substitution, so that the ball was in the opponent's gate. Also in the first season, Neymar broke the record of Lionel Messi, making the fastest hat-trick in the history of the club. It took 13 minutes for Neymar to score 3 goals in the gate of the Scottish "Celtic".

The next season was triumphant for Barcelona. The team won the championship of Spain, the Cup of Spain and the Champions League. Neymar shared the title of the best scorer of the Champions League with Lionel Messi and Cristiano Ronaldo, and also broke several club and personal records in football competitions.

On the football field, Neymar tries to play on the edge, and alone translates the game on the flanks. The forward is often criticized for his actions on the field. Football analysts believe that the Brazilian holds the ball too long, and this does not contribute to the effectiveness of the team attacks, because a bunch of Suarez-Neymar could be the most effective in Europe.

In the national team, Neymar made his debut in August 2010 in the game against the US team, although the fans demanded to include the striker in the team. Two months earlier he participated in the World Cup in South Africa. Fans even collected 14 thousand signatures in support of the football player. In addition, the legendary Pele personally agitated for Neymar, but Dunga, the head coach of the Brazilian national team, found the striker too young for such a competition.

In 2013, at the Confederations Cup, in which champions of continents participate, the Brazilian national team lost to the Spaniards in the final match. Nevertheless, Neymar was named the best player of the tournament.

At the home world championship in 2014, the player was called several times the best player of the match: the forward scored goals that decided the outcome of the games. But in the quarterfinal match against the Colombian national team the defender Juan Zunyiga injured Neymar. He broke third vertebra of the Brazilian striker, because of that the striker could not continue to play at the tournament. The Brazilian team ingloriously lost to the Germans with 1: 7 in the next game, leaving the competition.

Neither the fans, nor the players, nor the coach of the team doubted the importance of Neymar for the team, so after the World Cup striker has become a captain of the "Yellow-green". Since then, uniforms and t-shirts with the tenth number have become popular in Brazil.

Neymar had a lot of relations. Footballer was dating the model Carol Abranches, actress Daniela Carvalho, TV presenter Nicole Bals, model Barbara Evans and singer Rihanna. In 2016, Neymar told about his relationship with the actress Bruno Marchesini, whom he was dating earlier.

In 2011, the 19-year-old became a father. One of his girlfriends, a Brazilian girl Caroline, gave birth to his son David Lucca. But the birth of a baby did not contribute to the development of relations, the couple broke up. Nevertheless, Neymar is in touch with his son and is involved in the upbringing of the child.

It is known that Neymar has a wonderful relationship with his sister Rafaella. In her honor the striker of FC "Barcelona" even made a tattoo on his arm.

The Brazilian often participates in advertising campaigns. World brands signed contracts with the famous footballer, so that he advertised their goods. Such companies as Nike, Sony, Volkswagen, Red Bull and Unilever collaborated with the Brazilian striker. In 2013 the video, in which the football player presented boots Hypervenom by "Nike", was very popular. It is known that Ronaldo, a well-known Brazilian footballer in the past, was in charge of the financial and organizational issues of Neymar.

Music is Neymar's favorite hobby. And the football player not only listens and dances at clubs, but he also sings songs. The duets with Brazilian singers Gustavo Lima and Michelle Body have become popular. The songs were made when the footballer played for Santos.

Photo of Neymar can often be seen in Instagram. The striker of "Barcelona" posts pictures with other players of the Catalan team.

In May, 2017 the media reported that Neymar had issued an ultimatum. According to “Mundo Deportivo”, the striker told the representatives of the Catalan club that he would leave the team if Juan Carlos Unsue, the assistant coach of the Catalans, will stay in the FC.

According to Spanish journalists, the conflict between the football player and the coach happened at one of the training sessions. Unsue made a remark to Neymar, which caused a negative reaction from the striker. Later the coach criticized the athlete for his behavior outside the football field.

In the season 2016/2017 Neymar showed a negative statistics. The Brazilian played 28 games, having scored 13 goals. Such indicators of Luis Suarez against the effectiveness of Lionel Messi look depressing. In March 2017, British media reported on the possible transition of the Brazilian to London "Chelsea", as Roman Abramovich, the owner of the English team, has already agreed with the leadership of the Catalan club to buy the forward, but the head coach of the "Aristocrats" Antonio Conte imposed a ban on the deal.

In the Brazilian national team:

• The holder of the Confederations Cup 2013

As part of “Santos”:

• The owner of the Copa Libertadores 2011

In the FC "Barcelona":

• Winner of the UEFA Champions League 2015 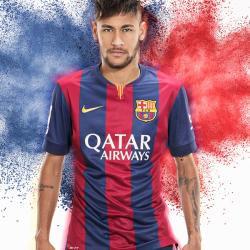