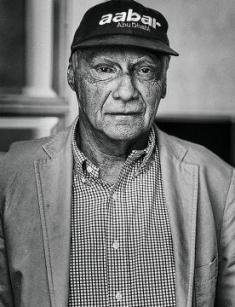 The three-time world champion Niki Lauda became the best racing driver from Austria in Formula One. However, the leader’s life was not all about brilliant victories: in 1976, he had an accident and got severe burns. However, the man found enough courage to come back to the sport and surpassed everyone. Lauda won two titles for Ferrari and one for McLaren. As the driver finished his circuit career, he became a commentator at the German sports channel RTL, sports manager, and racing expert.

Andreas Nikolaus Lauda was born in Vienna on February 22, 1949. The boy’s parents were successful bankers and prominent financial figures: the wealthy family controlled the paper manufacturing in the country, and the grandfather, Hans Lauda, was also an industrialist. Nobody doubted that Niki would become his father’s successor.

The future champion parked cars and drove around the house at 12. At 14, Niki drove a large van owned by the company he worked for; when the teenager earned enough money, he purchased an old Volkswagen.

The parents did not mind their son’s hobby at first. When 19-year-old Lauda debuted in the races in Cooper, the father raised the alarm, but it was too late to change anything. The young Viennese driver had to build his career on his own: the father stood against it and provided no financial support.

Lauda’s passion for driving often led to accidents. He began with his dad’s Austin Cooper S1300 that his had taken from his garage without permission and continued with failures in Formula Three. TV cameras caught his flip in Aspern; he also collided with an ambulance car in Zolder.

While the athlete realized how unnecessary his risk was, he switched to Formula Two in 1971, and he was only one step from the highest level. Lauda had to get loans to develop his career; the family’s rank was beneficial. To get a five-year loan, he put a bank advertisement on his helmet.

In 1970, Niki took the first loan and bought the Porsche 908. Although his debts were growing, the results were improving little by little; the driver had to tighten his belt and count every penny. Hard work and persistence were awarded: Lauda became one of the highest-paid racing drivers.

It was vital for the sportsman to participate in Formula 1, and he took another loan to secure a place in the March team. He competed in F1 and F2 races but showed little success. The next season, Lauda joined BRM and earned his first points; this is where powerful Enzo Ferrari noticed the young man.

In 1974, the Austrian joined renovated Ferrari led by young Luca Cordero di Montezemolo. The team benefited from such an ambitious professional: Niki was testing the new car day and night and helped improve it. He enjoyed new victories and made Ferrari the champion in 1975.

The German Grand Prix in Nordschleife was a significant event: his lap time was recording, less than seven minutes. In 1976, the driver had five victories and got 35 points ahead of his primary opponent, James Hunt; he was going to become the champion for the second time. However, a terrible accident happened then.

Many competitors decided to stay on wets because of the weather conditions. However, the circuit dried out after the rain soon, and Lauda had to change, just like the majority of his opponents. During the second lap, the driver’s car swerved and hit an embankment; afire, the vehicle got back to the circuit. Drivers, who were passing by, helped Lauda get out and saved his life. These events served as the plot for the movie Rush (2013).

As a result, Lauda had severe burns and head trauma; he sank into a coma. A month and a half later, the courageous driver with a blood-stained head bandage returned to the contest and finished fourth; he also won the competition in the United States.

The final took place in Japan; it was raining hard. Lauda voluntarily stopped racing in the second lap and explained that life was more important than any title. Fans were displeased and saw him as a coward; they forgot how the athlete’s life was hanging between life and death just a few weeks before.

In 1977, Niki Lauda was getting ahead of his main rivals, Mario Andretti and Jody Scheckter. However, when only two Grand Prix events were left, he quit Ferrari and gave his place to Gilles Villeneuve. Further on, the driver signed a contract with Bernie Ecclestone, the owner of Brabham.

The next two years did not bring anything special except for the Swedish GP in 1978: the new BT46B with a fan beneath was used. It was nicknamed “the fan car”. With this novelty, the car had a better downforce and proved to be more advantageous for turning movements. It was the only contest of the fan car: in 1979, Lauda resigned from Formula One as he was tired.

The sportsman switched to business and created an air company Lauda Air. A couple of years later, he faced financial problems and returned to the sport for this reason, signing a five-million contract with McLaren.

The first season brought two victories; Lauda was number five in the overall standing. He did not give in when the next season was a failure and won the cherished title in 1984. The following year was disappointing: the driver gained only one victory in the Netherlands and left Formula 1 forever to come back to the air business. Today, Lauda Air planes go to 33 directions; resort cities in Greece, Spain, and Turkey are predominating.

The former champion used to work as a consultant for Ferrari and drove a Jaguar; he also commented on F1 competitions sometimes and joined the board of management in Mercedes.

Lauda’s personal life was also full of exciting events. The driver married Marlene Knaus in 1976; they had two children together. The son Mathias followed in his father’s footsteps and became a racing driver; his brother, Lukas, was his manager.

The son Christoph was born out-of-wedlock. In 2009, the 60-year-old man welcomed two kids: the second wife Birgit Wetzinger gave birth to twins, a boy and a girl.

The famous driver had many fans; Internet users created many pages in social networks and posted photos and videos from his tournaments. Many people continue to take inspiration in the story of the champion who rose from ashes and reached success.