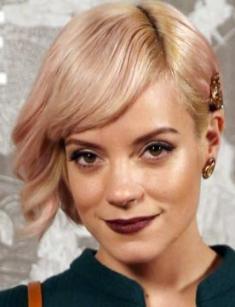 Lily Rose Beatrice Allen is a famous British singer, actress, and TV presenter known for the hits “Smile” and “Fuck You”.

The would-be star was born on May 2, 1985, in Hammersmith, west London. Her father, Keith Allen, was a popular comedian, and the mother, Alison Owen, worked as a movie producer. The girl’s family was large; she grew up with two sisters, Sarah and Rebecca, and the brother, Alfie Allen. Later, he became an actor and earned his fame for the role of Theon Greyjoy in the fantasy series Game of Thrones.

When Lily was little, Keith took her to a movie set. As the singer remembered, her father seemed to be hung-over: his assistant was taking care of him and prepared some coffee for him, took a hot bath, and accompanied the man everywhere. Young Lily thought she would like to live the same life.

When the would-be celebrity turned four, the parents divorced. The father left the family, and the mother traveled with her kids in suburban areas of London and Ireland.

Young Allen was far from being an angel: she played truant, raised the devil in a classroom, and tried smoking and drinking alcohol in secret. The girl did not settle in any school; even the prestigious Bedales and Hill House failed to reason with her.

Like father, like daughter: perhaps, the would-be singer inherited such behavior from Keith, who was expelled from school at 13 and got to a youth detention center two years later. Lily had no friends because of frequent school changes, and she reluctantly met new people, preferring to be an outsider. At the same time, she was a shy child.

Music became the way to escape; it was the mysterious world for the girl and attracted her more than unpleasant school subjects. Allen learned how to play various musical instruments on her own. One day, she ran away from the house to attended the Glastonbury Festival.

When Lily was eleven, she performed the song of the popular rock group Oasis in the yard, and the singer Rachel Zeffira noticed the young talent. She gave the little vocalist several music lessons. According to Lily, she was enthusiastic about art but showed pretty much laziness: she could stay in her room, reflecting on her thoughts and feelings for a long time. The young woman left her shell only when she turned 18.

Lily always knew she did not want to work for somebody. When she turned 15, the teenager quit the school and told her mother she would become a singer. However, those words were not confirmed by the actions at first: the beauty did not do anything.

To earn her living, Allen sold drugs and worked part-time in a local music store Plastic Fantastic. Everything changed thanks to luck: the young woman met the former producer of Audio Bullys, George Lamb, in Ibiza. Lamb introduced the extravagant artist to the duet Future Cut; Lily recorded several singles and began her career.

Rumors had it that recording studios did not want to deal with the drinking hooligan. However, in 2005, she managed to sign a contract with Regal Recordings that gave Allen £25 000. Following the advice of the singer Louise Harman (Lady Sovereign), the beginning singer registered on MySpace and shared her demo-versions there.

Besides, Lily told her followers funny stories that had happened to her and earned their trust. The songs went viral on the Internet, and the British media began to talk about the actor’s daughter.

2006 was fortunate for Lily: she presented the debuting album Alright, Still on Regal Zonophone Records and gained much popularity in the country. The disc became number 29 in the list of bestsellers and kept topping music charts. The major hit, “Smile”, was being broadcast on all radio and TV channels; MTV banned it for a while, though, due to its foul language. The track became the singer’s trademark, yet the audience’s reaction was ambiguous. Some music lovers believed the rocksteady song sounded fresh while others insisted that Allen became a typical pop singer because of it.

According to Lily, many tracks were inspired by real-life stories. For example, she recorded the single “Alfie” about her younger brother’s laziness. The sister was sure he would like the song and its instructions, but the actor felt offended, as Lily revealed his personal weaknesses. The artist also shares her own emotions, as it was in “Littlest Things”.

In 2009, fans welcomed the second studio album, It’s Not Me, It’s You, notable for the insolent-titled hit “Fuck You”. The singer uncovered stereotypes existing in society.

Lily has won many prizes. In 2010, she received Brit Awards, but the prestigious achievement did not prevent her from leaving the stage. Still, Allen continued to create tracks for other singers.

In 1988, when Allen had just turned three, she debuted in the popular American TV show The Comic Strip. Ten years later, she got a minor role in the historical drama Elizabeth (1998) and collaborated with many celebrities: Cate Blanchett, Geoffrey Rush, Christopher Eccleston, and others.

The actress’s filmography is not long. In 2012 and 2014, she participated in little-known short movies Black Hole and 40 Love. Besides, she had several cameo appearances, such as the series CQC: Custe o Que Custar.

Lily Allen does not keep her personal life secret and openly talks to journalists about it.

In 2007, the musician began to date Ed Simons, the soloist of the British duet The Chemical Brothers. The couple could have been happy if Lily had not miscarried; they broke up soon. In 2008, the paparazzi saw the ex-lovers together: Lily needed support, and Ed helped her survive through the difficult period. However, they did not continue their relationship.

In 2010, Lily met the painter Sam Cooper. Unfortunately, when the singer was in her sixth month of pregnancy, she miscarried again. The couple went through the tragedy together and married in the summer of 2011. The luxurious wedding ceremony was held in an old church in Gloucestershire; the beautiful bride was wearing a Delphine Manivet dress.

In 2014-2015, the media reported Lily and Sam’s separation. According to journalists, the break-up was painful for the artist; she was often seen in tears. Besides, photographers found no ring on her finger; the former boyfriend, Seb Chew, often accompanied her at that period.

The musician confessed she had a mental disorder. Lily was diagnosed with a bipolar disorder: high spirits could transform into depression and desperation at once.

Lily Allen is a profound social activist. As Daily Mirror reported, Lily accused the London media of incompetence: according to the singer, journalists underestimated the number of fire victims in a residential house and wrote about 17 affected people instead of 150. The woman could not keep silent.

The celebrity deleted her Instagram page some time ago but restored it. Today, there are no family pictures there; she probably wanted to turn over a new leaf in her life without remembering Sam, the initiator of the break-up.