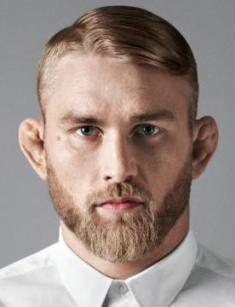 The Swedish mixed martial artist, Alexander Gustafsson, competes in the light heavyweight division. As of 2018, the man is #1 in official UFC light heavyweight rankings. He and Jon Jones were awarded the "Fight of the Night" bonus award for their performance in 2018.

Alexander was born in the Swedish city of Arboga in the winter of 1987. The boy was fond of sports games since childhood, so at the age of 10, his parents enrolled him in the boxing class.

Regularly attending training and diligently improving his skills, the young man soon began to participate in the first competitions. The 16-year-old athlete won the national championship (youth-junior level) in 2003.

In 2006, Gustafsson’s life became associated with mixed martial arts. At the age of 19, he went in for this sport, quickly mastered new techniques, and began to compete at MMA. One year later, he started his professional MMA career.

However, the spirit of boxing and the gained experience did not give the young man a chance to skip boxing fights. In 2008-2009, Alexander won several amateur tournaments in Sweden, and he also defeated the Swedish heavyweight boxing champion in an amateur match. The athlete was set to compete in the national championship event the following year. However, the man could not do it because he signed with the UFC in September 2009.

Before starting his professional MMA career, Alexander fought mostly in smaller promotions in Sweden and Europe. For several years of training, he managed to rack up a perfect pro-record, winning by way of KO. In the spring of 2008, he fought against German Florian Muller, defeating him in the second round.

The same year, he fought with Krzysztof Kulak, who at that time was a top prospect in Poland. Gustafsson won the match, knocking Kulak down. Before signing the contract, Alexander faced European MMA veteran Vladimir Shemarov in May 2009. The Swede knocked the opponent down in the first round.

Gustafsson made his UFC debut in 2009. His opponent was Jared Hamman, whom the young man dropped with a straight right punch and won the fight via KO in the first round.

In the spring of 2010, he fought against Phil Davis and lost the fight.

However, he had trained a lot before the next match. The man had to fight against MMA and kickboxing veteran Cyrille Diabaté. Gustafsson went to San Diego, California, and trained with his former rival Phil Davis, and also received instructions from Travis Browne, Brandon Vera, and other famous athletes.

After improving some tricks, Alexander won the fight in the second round, defeating Cyrille Diabaté via submission due to a rear-naked choke. The man won the next battle against Australian James Te-Huna, also defeating him by submission.

At the end of 2011, the Swedish athlete competed in the match against Vladimir Matyushenko again, finishing the opponent by TKO. In 2012, he defeated Maurício Rua, and in 2013 he faced Jon Jones for the first time and ultimately lost via unanimous decision.

In 2015, Alexander Gustafsson faced Daniel Cormier. It was a spectacular and intense fight of the UFC light heavyweight champion and the Swedish professional fighter. In the first round, Cormier landed a beautiful takedown, and in round 2, his opponent already made two takedowns. However, after some hard punches in round 3, Cormier was dropped by a knee.

In May 2017, the Swede faced Glover Teixeira in the octagon. Since the match took place in Stockholm, the home ground, apparently, helped Alexander to win. In the fifth round, Glover made several powerful uppercuts, but Gustafsson dropped him with a right punch and won the fight via knockout.

The athlete devotes a lot of time to sports; however, he also finds time for personal life. In 2015, he began dating Moa Johansson. The young woman has often attended the man’s fights and always supported his sports interest. In May 2017, the fighter's fans learned the good news that Alexander became a father; Moa gave birth to a beautiful daughter, who was named Ava. The man even posted the photo of the woman and the newborn girl on social networks, leaving a touching comment.

A few weeks after this joyful news, the long-awaited match with Glover Teixeira took place, and this time Alexander won it, defeating his rival vie knockout. At the end of the fight, Alexander invited the woman to the octagon and made a marriage proposal to her, taking a stand on one knee in front of the cameras and thousands of viewers. Moa did not expect it; she was touched by the act of her boyfriend and said, "Yes."

They have been engaged so far, and the woman has not become his wife yet. But this did not prevent the couple from having a larger family. In September 2018, Gustafsson had a son, and nowadays, there are two children in their family.

Alexander, meanwhile, continues to prepare for competitions but does not forget to pay attention to the family. It is evidenced by the photos, which the athlete and his girlfriend regularly post on Instagram.

In October 2018, Gustafsson faced Jon Jones. The opponents already fought in 2013, and this time, Alexander also got another shot at the title. Jones won the rematch, but the Swedish fighter is still the only athlete who could offer the champion a heavy fight.

Alexander Gustafsson has an estimated net worth of $250,000.