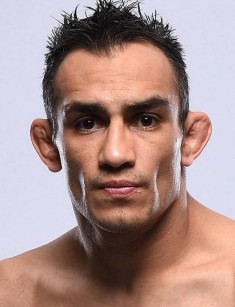 Tony Ferguson is a famous sportsman, fighter of the mixed martial arts who performs in the featherweight category. His unique technology of the fight has made him a real rival, and a has brought him many awards. The duels with Tony's participation are always extremely spectacular, and he regularly gets bonuses for best performance of the evening.

Anthony Armand Ferguson was born on the 12th of February, 1984 in the town of Oxnard, State of California. He didn’t know his biological father: right after the son's birth his mother Mary got married one more time. The Scot Armand Ferguson brought up the boy and gave him his surname.

When the future eminent sportsman began to attend the school, his family relocated to Michigan, Muskegon County where his stepfather became the owner of the small bar. Anthony was growing a shy and unsociable child that's why Armand began to acquaint his son with the sport at an early age. Right after the boy was enrolled to the school, his father took his son to the boxing club, and later encouraged his occupations with basketball and rugby. Having become a professional fighter, in the interview the sportsman thanked his stepfather for the fact that he directed him on the right path, and he said that he is obliged to his father for his career.

Studying at high school, Tony began to show noticeable sports progress which helped him to get the grant on the admission to Michigan Central University – the most prestigious educational institution of the state.

The young man chose the faculty where there were studying the specialists in the field of oil and gas. Though, having studied here for 3,5 years, he left his studies. The death of his mother which became a tragedy for Tony became the reason for this. To take his thoughts off of the things, he plunged into the training, and after some time he left his studies at the university.

Ferguson returned to his native town of Muskegon and started to help his father with the bar. Later he remembered this period with great pleasure – he liked the cheerful and easy-going atmosphere of the bar, and the bartender's work seemed simple to him. Once among their clients, there was a person who invited Anthony to the training center of MMA fighters, and Tony liked what he had seen so much that he decided to try himself in the sphere of the martial arts.

Despite quite good physical parameters, Ferguson had difficulties with the training – his muscles hurt, he felt sick though this didn't stop the future star of the ring. Two months passed and he threw himself into the new hobby and left his bartender's work. In 2008 Anthony received the license of the fighter and began to perform in the welterweight. The sportsman began to demonstrate aggressive and particular fight technique already at the first competitions. During the first two years of the career Ferguson lost two fights out of 12.

In 2011 Tony was offered to conclude the contract with UFC – the largest company which organizers the fights. He accepted it and the same year appeared on the ring in the battle against Ramsey Nijem, having knocked him down in the first round. In a short time, Ferguson has become a participant of The Ultimate Fighter reality show and has started training under the leadership of Brock Lesnar.

The show helped him to reveal his character and artistic skills. On the ring, Tony was considered to be a hot-tempered fighter, who easily fell victim to provocation and quickly lost his temper. At that time he took himself the pseudonym of El Cucuy. El Cucuy is a name of an illusive mystical monster with which people frighten the children in the countries of Latin America. His unique fight technique is a combination of the boxing techniques and "tricks" borrowed from jiu-jitsu.

Though at The Ultimate Fighter Ferguson took part in the tournament in 170 pounds, for constant fights in UFC he chose the category of lightweight. In a short time, the sportsman enriched his list of victories with the brilliant fights with Aaron Riley and Yves Edwards. Tony lost his fourth fight at UFC. Though, as his admirers noticed, these failures have motivated Tony and haven’t demoralized him. Right after this he won 10 times one by one (still this result has become the best one in the division) and had gained the glory of the real threat for other fighters in featherweight.

Till October of 2015, Anthony already had 15 fights in UFC in his assets from which 14 of them were victorious. He only had one defeat with the score 13:3 in the fight against Michael Johnson. That fight resulted for Tony in the broken hand that’s why he took a break in training for half a year and then returned on the ring later - rested, vigorous and dangerous.

Anthony either knocks down or puts out of action the majority of his rivals. He does this with the help of chokehold might which he masters skillfully. In his list of victories, there was a spectacular show: Ferguson won the fights with such stars of the ring as Danny Castillo, Lando Vannat, Katsunori Kikuno, and others. In 2017 Tony won a fight with Kevin Lee, which he finished with his well-known chokehold might.

During his sports career Ferguson never managed to defeat the Dagestan Khabib Nurmagomedov, and now, by the words of Anthony, he is his most desired rival. Tony has difficult relations with the ex-champion Conor McGregor. On the 30th of December, 2017 there was planned their fight, but it was canceled. McGregor behaved aggressively towards the judge during the previous competition, and UFC decided to punish the athlete in such a way.

His fans were very disappointed by such decision as the fight promised to be bright and spectacular. On the web there appeared the accusations that Conor was aggressive with the referee to leave the fight and not to lose his face because he understood that Ferguson was stronger than him. By means of the media Tony accused McGregor of cowardice and told him:

"Come back when you become a real man."

A sportsman is a married man; he got acquainted with his future wife Christina when he was a student. They married in 2012, and four years later Christine gave birth to their son. Anthony called him Armand in honor of his stepfather. At present, the family has settled in the town of Los Santos, California, and Ferguson tries to dedicate more time to his personal life despite his busy working schedule.

Except for sport, Anthony has one more hobby - he is fond of the cars. He likes traveling to distant places with his family. Besides, the fighter has collected a great collection of blade weapons the major part of which was presented to him by his fans and friends.

Tony has accounts in a couple of social networks, including Twitter and Instagram where he publishes photos from the training and performances. On his hand, the athlete has a tattoo, which represents the sequence of the letters TSKYH. By the words of the fighter, it is deciphered as Think Strong Keep Your Head. Tony is 180 cm tall and weighs 70 kilos.

In April Ferguson had serious surgery on his knee. To prove this, he published on his Twitter a photo of the injured leg with bruises and brackets and announced that he hurt it by chance and wasn’t angry because of this situation. Tony had to undergo long-lasting rehabilitation before he could appear on the ring again.

In 2018 the sportsman fought against Anthony Pettis who was a defending champion of MMA. The fight turned out to be violent, and the blood was flowing on the floor though none of the participants wanted to give up. As a result, the referee dropped Pettis from the second round, and Tony won with a technical knockout. After the fight, Ferguson was diagnosed with the fracture of the right hand.

At present Anthony is seriously engaged in preparation for the forthcoming fight with Khabib Nurmagomedov. Earlier, UFC tried to organize this fight four times through each time the fight was postponed for various reasons. The admirers hope that the 5th attempt will be successful.

"I will smash him in blood, – Ferguson says. – I will dance around this guy and beat him with rigid uppercuts so that he will think twice before passing to me in the legs". 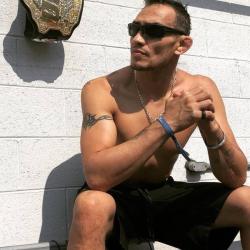