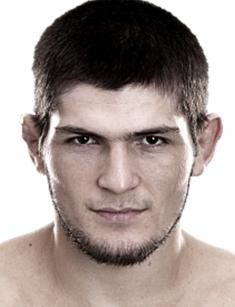 Khabib Nurmagomedov is the Russian fighter of the mixed style, who has a lot of victories in big fights.

Khabib has the title of the champion of Russia, the two-time world champion, the European champion. Khabib became the first Russian, who won a title of the winner of the tournament in the single mixed combats of the UFC.

The boy was born in the Dagestan village of Sildi on September 20, 1988. He is a native Avar by nationality. Many of Khabib's relatives are engaged in wrestling professionally, including his father, who became the trainer of the son.

Abdulmanap Nurmagomedov, Khabib's father, became the champion of Ukraine in the 90s and his uncle received a title of the world champion in sports Sambo. There are also relatives, who possess titles of masters of games in wrestling on my mother`s side.

The boy started training at the age of 5. His younger brother, Abubakar, who later also became a professional athlete trained together with him. The male population was engaged in freestyle wrestling in his native village. All youth was on sports grounds.

When Khabib was 12 years old, the family moved to Makhachkala, where his father continued classes with young people, organizing a sports camp for talented teenagers. The coach of Khabib in this period was Saidahmed Magomedov, who was involved in boys wrestling. In his childhood, his idol was the Russian athlete Fedor Emelianenko.

One day, Khabib first saw fighting without rules on the video and was eager to learn, striking technique too. But the wise father advised him to continue training in wrestling, it stopped the young man, besides for one and a half years he goes to the trainer Jafar Jafarov to teach judo.

After returning to Makhachkala, Khabib continues training in combat Sambo. By the beginning of the fighting career, the young man passed all types of preparation of various martial arts but, according to the fighter, his equipment of blow is still not perfect.

The 20-year-old sportsman first performed in the big ring. For three years of competition, Khabib received 15 awards of the winner, becoming the champion of Russia, Europe and the world in a short time. He worked under contract with sports companies ProFC, TFC and M-1 in the category of lightweight (the weight of Khabib is 154 lbs (70 kg) with a growth of 5,8 feet (177 cm)).

The American organization UFC, having counted all benefits and risks, invites the talented sportsman in the ranks. Such a turn of events in the biography of Khabib Nurmagomedov brought him to the world level of fame. The champion can be seen at the Russian or European tournaments and the competitions arranged between the best fighters of the world in Los Angeles and Las Vegas.

The youngest fighter of the club enters the ring for the first time in the history of the UFC: Khabib was only 23 at the time of his debut in the UFC competitions. He trained hard and wanted to fight. He had his first success, nicknamed 'The Eagle,' was the victory over the athlete from Iran Kamal Shalorus, in a fight with whom Nurmagomedov used the method of strangulation. After that, the successful march of the Russian athlete began.

The best wrestlers of our time: the Brazilians Thiago Tavares, Gleison Tibau, American Pat Healy fall at his feet. Khabib Nurmagomedov's rating in the UFC list begins to grow rapidly and he already takes the 4th place among all athletes of the organization. The level of the Russian athlete is noted by the head of the UFC Dan White but Khabib has the best fights ahead.

2014 was a challenging year for him. The first battle took place under challenging conditions, one of the most active fighters of the MMA Rafael dos Anjos fought with Nurmagomedov. But the Russian sportsman won in 3 rounds. Khabib suddenly broke the tendons of his knee and was dropped out from the process for a year on the eve of the tournament with Tony Ferguson.

After another injury in 2015, Nurmagomedov leaves the ring again for an indefinite period. He had a broken rib this time. After two years of testing, the athlete triumphantly returned to the UFC, defeating Darrell Horcher, taking the knockout. The technique of application of the knockout became one of the leading for the Dagestan wrestler. He often uses this method in competitions.

The athlete from Russia accused the board of rigging the UFC contracts, presenting compelling evidence a few months later. After that, Dan White suggested the fighter to choose his opponent. Khabib has long dreamed of a strong opponent and he took the fight from the sixth number in the list of the strongest fighters of the club – Michael Johnson in the fall of 2016.

Khabib applied a painful reception in a tournament with the American athlete, without having left to the rival even chance to knock on a floor and thus to show that he gave up. The judges recognized Michael's problem and stopped the fight thanks to their experience, realizing Khabib Nurmagomedov as the winner.

After a victorious duel at a meeting behind the scenes with the leader of the UFC Conor McGregor, the hot Dagestani sportsman began to provoke him offensive phrases and caused anger in the Irishman. A couple of embittered on each other athletes were kept from a fight, having pulled apart on the parties.

Khabib Nurmagomedov had to defeat Tony Ferguson to fight with McGregor, with whom he never fought three years ago. The tournament was scheduled for March 4, 2017, but the meeting did not take place once again. Khabib did not appear at the weigh-in for health reasons. The only fight of Nurmagomedov was the match against the Brazilian fighter Edson Barboza in 2017. Khabib was awarded the victory by unanimous decision of the judges.

It is not much known about the personal life of Khabib Nurmagomedov. A right Muslim hides information about his family and wife. It is known only that the fighter is married. The bride's face is not visible on joint photos from the wedding even on "Instagram," it is hidden under a thick wedding veil.

He has two children. The couple had a daughter soon after the beginning of their life together. In 2017, his wife gave the fighter a son. Khabib goes without his spouse in competitions. He does it for family safety reasons and sports recommendations. Distractions should be nullified at the time of the competition so that the fighter could best prepare for the upcoming tournament.

Khabib Nurmagomedov is sensitive to his faith. The young fighter observes the customs of his religion; he does not drink alcohol, does not smoke, does not attend places of entertainment. He visited Mecca, the central city for Muslims together with his brother. According to the wrestler, his belief helps to accept life such what it is. He is equally calm about success and ready for defeat. This state of mind helps the young Dagestan defeat rivals regularly.

Now Khabib Nurmagomedov takes the 2nd line regardless of weight category in a rating of the best fighters of UFC. There are 27 victories and no defeats on his account. The MMA fighter Khabib Nurmagomedov became the first Russian, who won a title of the champion of the tournament in the single mixed combats of the UFC. It happened after his victory over American Jay Iaquinta in April 2018. Khabib Nurmagomedov is a Russian mixed martial artist who has a net worth of $1 million.

The duel between the fighters in the lightweight Nurmagomedov and Iaquinta lasted five rounds. The meeting was held in the native walls for the American athlete, in the arena in New York. The winner's fee was $ 530 thousand.

Khabib Nurmagomedov was in a scandalous situation in the US. His longtime opponent Conor McGregor attacked the bus with fighters of the UFC, where Khabib was. The situation was out of control. The Irishman began to throw garbage cans and carts into the car along with his colleagues. Windows were broken, Ray Borg and Michael Chiesa were injured.

Subsequently, the Irishman said the reason for such behavior. It was disrespectful relation of Khabib to McGregor. The compatriot of Conor, Artem Lobov called Khabib a coward in an interview, Khabib grabbed him by the throat and demanded to repeat the words during their meeting in a hotel in New York City.

In the summer of 2018, it was known about the upcoming fight between Khabib Nurmagomedov and Conor McGregor. Promoters decided on the date of the competition on October 6. This fight became the most cash in the history of the MMA. According to experts, Nurmagomedov's fee was from $ 1 million and above. A press conference with the fighters took place at the end of September. The performance of the Irishman was regarded as provocative at the meeting.

He accused the father of Khabib of cowardice because the man maintains a friendship with the leader of Chechnya, Ramzan Kadyrov and is afraid to quarrel with him. Nurmagomedov told about respect to people around which he was brought up in the Caucasian families. Khabib reminded Conor of the picture with Vladimir Putin but McGregor immediately picked this interesting topic question of the fighter respect for the current President of the Russian Federation.

In early autumn, Nurmagomedov lit up in the scandal around the concert of Egor Kreed in Dagestan. There were reports of threats to the performer, up to physical violence in preparation for the speech of the Russian rapper on the Internet in Makhachkala. Khabib appealed with calls to ignore the concerts of rappers to subscribers of "Instagram." Timati stood up for the artist of his label but received a tough answer from the athlete.

On October 7, 2018, a meeting of the year was held between Conor and Khabib, which ended with the victory of the Russian sportsman after a suffocating reception in the 4th round. After the fight, Nurmagomedov climbed over the fence and attacked the coach of the Irishman, that provoked a mass battle between the parties.

As a result, Khabib defended the title of a champion but he was refused to hand over the belt solemnly, referring to the obscene behavior of the Russian athlete. According to Khabib, Conor and his team repeatedly offended Nurmagomedov, religion and members of his family throughout all preparation for the fight and advertising campaign.

Conor suffered his fourth defeat in his professional career. The victory over the Irishman moved Khabib to the 2nd place from the 8th in a rating of the best fighters of the UFC. The defeat of McGregor changed the athlete's positions in the rankings: Conor was on the 2nd place previously and now his name's on the 8th row.

At present, Khabib's net worth is estimated at $2 million.