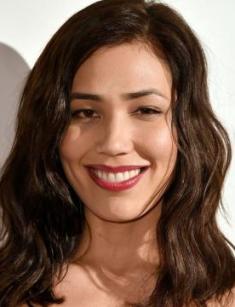 Michaela Conlin is a bright, talented, and beautiful actress. Fans like each role of the woman. The actress rose to fame, playing in the famous American TV series Bones.

Michaela Conlin was born in Allentown, Pennsylvania, on June 9, 1978. The girl’s father is Irish, and her mother is Chinese. So, Michaela has an unusual and beautiful appearance thanks to a mixed descent and different cultures. From an early age, the girl attracted the attention of others, and the life of Michaela Conlin has become a path to the cherished roles in movies. She revealed her acting talent in early childhood; the girl performed in the theater, played roles in school productions, and constantly surprised her teachers and parents, getting into her character quickly.

When the future star graduated from high school in 1996, she had already played dozens of roles. The girl moved to New York City and entered Tisch School of the Arts. The actress chose the performing arts department. During her studies, Michaela already attracted the attention of teachers because Conlin brilliantly coped with roles in student performances, and soon the actress landed only the leading roles. Michaela Conlin’s constant self-improvement and rehearsals contributed to her brilliant acting on the stage.

After graduating from the School of the Arts, the actress went to Amsterdam to participate in the Experimental Theatre Wing's International Training Program.

Soon, Michaela Conlin was invited to play in films and TV shows. The actress played the first roles in the TV series The Division, Law & Order, and JAG. However, these projects did not make the girl famous. For the first time, they began to talk about Michaela as a promising talented actress after her role in the movie Love the Hard Way. This touching story about the relationship of an ordinary student and a cunning fraudster was interesting to girls, and Michaela Conlin’s heroine makes people well disposed.

After this role, the filmography of Michaela Conlin began to add new projects rapidly. In 2002, the woman starred in the movie Pipe Dream, as well as the drama Garmento. In 2006, the actress played in one more tragedy, Open Window. This soulful movie caught the fancy of viewers, showing how misfortune can quickly destroy the life of one person and his loved ones. In 2007, Conlin starred in the fairy tale Enchanted about a cartoon girl who was transferred from the screen to the real world by the will of an evil stepmother.

Directors also offered Michaela roles in TV series. The actress’s acting in the project Bones brought Michaela the overwhelming popularity and love of her fans. This iconic TV series tells about a group of scientists and forensics who investigate the bones of dead people and masterfully solve incredibly intricate matters, using the findings. Each episode of Bones is a separate case that the heroes have to investigate. In this TV series, Michaela Conlin worked with her friend Emily Deschanel. This creative movie duo turned out to be truly bright and talented.

The personal life of Michaela Conlin is a closed book for fans and journalists. Despite her attractive appearance (Michaela Conlin is 5.64 ft. (172 cm) tall), the actress does not make boast of numerous love affairs. The woman carefully hides romantic relationships.

However, reporters managed to find out that in 2012, the beautiful actress began dating Arnar Gunnlaugsson, a famous football player from Iceland. Arnar did not become the husband of Michaela Conlin, although the details of this relationship and the reasons for the separation remained unknown.

Michaela was also credited with a passionate relationship with T. J. Thyne, her Bones co-star. However, this information was not confirmed because the actress refuses to comment on anything that concerns her private life. Reporters also do not know whether Michaela Conlin has children.

Now Michaela Conlin is still not married, and it is not known whether the heart of the bright beauty is free or not. However, Michaela’s career is very successful; the woman is one of the ten richest Hollywood actors. Roles in movies and TV shows helped her to make a good fortune. Despite the mature age, the actress keeps fit. Michaela Conlin’s Instagram page is excellent proof of it. Photos of Michaela Conlin delight fans and make them want to imitate the star.

However, the actress can boast not only the impeccable appearance and acting skills but also a writing talent. Michaela Conlin has tried her hand at creating small stories in her free time. Perhaps, the star will delight fans with a published book in the near future. In the meantime, they can only wait for the new roles of the actress.