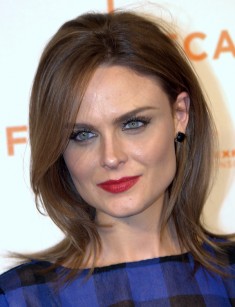 Emily Deschanel is an American actress with French and Irish roots. She was born in October 1976 into the family of Caleb Deschanel and Mary Jo Weir. Emily’s father is a successful movie director and producer; the mother stopped developing her career after the series Twin Peaks and took care of the children. Emily has a younger sister, Zooey Deschanel, who is also a popular actress.

Due to the father’s job, the family had to travel often. Before Emily reached the legal age, she lived in France, Italy, Yugoslavia, Canada, and South Africa. The girls’ mother who had sacrificed her own career tried to encourage her daughters’ desire to be actresses.

The family stayed in France a little longer than other countries; besides, Caleb came from this country. The parents often took Emily to the theater; she absorbed its beauty enthusiastically. At that time, the father gave his daughter the first acting lessons.

According to Emily, the mother instilled the love of beautiful clothes and makeup in the girls; she taught them excellent manners.

In the course of time, Emily went to Boston and finished acting classes in a local university. She also received a Bachelor of Fine Arts in Theater.

Emily debuted on the big screen in 1994: it was the comedy It Could Happen to You starring Nicolas Cage and Bridget Fonda. It was the father who contributed to his daughter’s bright start. Still, Emily did not become famous then: she had to take many episodic and secondary roles before the real fame.

Soon, the young actress was offered a role in the screen adaptation of Stephen King’s novel Rose Red; finally, directors and producers took notice of Emily’s talent. Several movies and series, including the Academy-Award-winning movie Cold Mountain and the blockbuster Spider-Man 2, followed.

2005 was marked with the breakthrough: Deschanel received one of the lead roles in the thriller Boogeyman. This project was a tremendous success; the box office was impressive. Both ordinary people and movie creators recognized Emily Deschanel, and she starred in the new Fox series Bones.

The role of Temperance Brennan brought Emily fame quickly. The audience liked the detective anthropologist so much that the actress turned into a star on the first day after the pilot episode. Deschanel gained several prestigious awards. In 2006, she was nominated for Satellite Award; 2007, 2011, and 2012 were marked with Teen Choice Awards Choice TV Actress: Drama nominations.

From the third season of Bones, Emily worked as a co-producer of the project together with Kathy Reichs, the detective novel writer and the prototype of Deschanel’s character. In the fourth season, Emily’s colleague David Boreanaz also became the producer of the franchise.

In this project, feminine and fragile Emily plays an outstanding anthropologist, forensic doctor, and archeologist. This character deals with people’s remnants better with living persons; for this reason, it is difficult for her to cooperate with an FBI agent and his team. Overall, it is exciting to watch the beautiful doctor and charming agent’s relationship.

Emily Deschanel has conquered the world of television as the series character and seems to keep it up. The full-length movies with the actress continue to appear on the big screen, and the star can be sure that viewers will not mistake her for somebody else. In comparison, the artist’s younger sister, Zooey Deschanel, is often mixed with the singer Katy Perry: the women bear much resemblance to each other.

Both media and fans did not know much about Deschanel Jr.’s personal life. The woman did not keep it secret, but her work enthusiasm led to the absence of something significant. Emily learned her mother’s lesson and put many endeavors in her career. By the moment she starred in Bones, the woman was almost 30, but she did not even think of marriage.

Many people expected the actress to date her series colleague. Nevertheless, the actors were only friends. The episode where the “wonder woman” appeared in a hot costume and seemed to be flirting with David Boreanaz’s character encouraged the audience to hope for their real feelings. Thus, it was a great surprise when the actress started visiting social events with the shy scriptwriter David Hornsby.

In September 2010, the couple married officially. The wedding ceremony was modest and took place in Los Angeles; only relatives and close friends were invited. The next year, on September 21, 2011, Emily and David’s first child, Henry Lamar Hornsby, was born.

The actress is used to work by all means; she participated in Bones when she was pregnant, and the producers had to introduce some adjustments to the script: her character had two children because Emily gave birth to the second son, Calvin Hornsby, in 2015.

Although the woman put on some weight after childbirth, she managed to get fit again quickly; today, she looks beautiful, to fans’ pleasure.

Rumors has it that Emily is pregnant again; the audience is still wondering why the actress left the series Bones. In February 2016, Fox channel announced the 12th and the last season of this project. The first episode was presented on January 3, 2017. 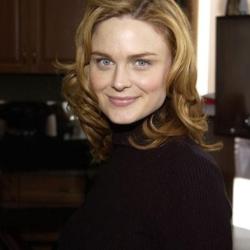