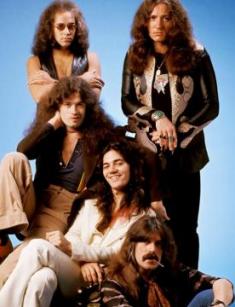 Deep Purple is a famous British rock group of the 1970s. Music critics consider them to be the founders of hard work and appreciate the musicians’ contribution to progressive rock and heavy metal development. There is hardly a person who has never heard Deep Purple’s songs: “Smoke on the Water”, “Highway Star”, and “Child in Time”.

The history of formation

The group formed in 1968; the drummer Chris Curtis initiated it. In 1966, the musician left The Searchers, but he was eager to continue his music career. The keyboard player Jon Lord was also looking for something new. The artists met by accident and immediately found a common language. Curtis called the new band Roundabout.

Lord was acquainted with a talented guitarist, Ritchie Blackmore who lived in Germany back then. He was offered to join the group and agreed. This is when the initiator of the group’s creation disappeared; there were many speculations about drugs. The project’s existence was in danger, but Jon Lord took all the matters in his own hands.

The musicians decided to rename the band during the first tour; each of them wrote their suggestion on a piece of paper. Fire and Deep Purple were the most discussed options; the second name was chosen eventually. Ritchie Blackmore offered it: his grandmother loved Bill Ward’s romantic ballad with the same title.

Deep Purple has existed for 50 years; overall, 14 group members played there. The drummer Ian Paice is the only person who was the original member and continues to be one today. Various group compositions are identified by “Mark” and corresponding numbers.

The first shows took place in Denmark. Ian Paice was the drummer; Rod Evans performed vocal parties. Ritchie Blackmore and Nick Simper played the guitar while Jon Lord was a keyboard player. Few people listened to the group in their home country, but the USA always welcomed them warmly, and thousands of people gathered to see them.

Soon, the group’s frontmen, Blackmore and Lord, met Ian Gillan, the vocalist of Episode Six. The musicians were impressed by his voice. Gillan went to the auditions with the bassist Roger Glover; they were a formed duet at that period.

The artists were immediately invited to join the group; however, Rod Evans and Nick Simper did not know that rehearsals were held without them and continued to perform on the stage. It did not last long. Eventually, Evans and Simper were paid off compensations; besides, they would receive £15 000 annually from album sales. Nick chose a different way and sued the group; he gained £10 000 but lost the allowances. It was a weird decision.

In 1973, more and more conflicts kept arising. In the middle of the year, after another album was finished, Gillan and Glover left Deep Purple. As Blackmore insisted, the band continued its work and accepted David Coverdale and Glenn Hughes.

The following albums did not enjoy much success. Ritchie felt unsatisfied and left the group in May 1975; Tommy Bolin was invited to replace him, but his musical style was not suitable for hard work. Moreover, the artist used drugs.

In 1976, the group’s manager announced the split-up. Several months later, Bolin died because of an overdose.

Perfect Strangers became platinum soon. However, Blackmore and Gillan had much disagreement, and Ian quitted again. Ritchie invited the former vocalist of Rainbow Joe Lynn Turner. Other group members did not like it, and Gillan came back to the project.

Further on, it was Blackmore’s turn to give up and leave; Joe Satriani replaced him. The group did not create a single album at that period. Some fans believed that Deep Purple would not be the same without Blackmore, but it was not right: Ritchie had Rainbow and founded the group Blackmore's Night with his wife, Candice Night.

The American guitarist Steve Morse followed Satriani. The group performed until 2002 when Jon Lord decided to drop, and Don Airey came. In 2011, it was revealed that Lord had pancreatic cancer; the musician passed away on July 16, 2012.

Mark 1 recorded three albums. The real fame came in 1970 with the album Deep Purple in Rock that made the artists one of the most popular rockers of the 20th century. Their songs topped music charts, and crowds visited their shows. Although the group traveled a lot, they recorded the new album Fireball.

A couple of months later, Deep Purple went to Switzerland to create Machine Head. The legendary hit “Smoke on the Water” was born at this period: a fire started during a concert. Later, Glover had a dream about the fire and smoke above Lake Geneva; as the man woke up, the words

“Smoke on the water, fire in the sky” dawned upon him.

Following the wave of success, the musicians went to Japan and then recorded the platinum album Made in Japan.

The Japanese audience surprised the rockers: people just sat there and listened, silent. When a song would finish, people would start clapping their hands and cheering up. Deep Purple got used to a louder audience: Europeans and American were screaming at their concerts and making their way to the stage.

As Gillan left, the group recorded the new album, Burn, and presented the new songs at California Jam; the festival gathered together more than 400,000 music lovers and became a unique event. It was also notable for Blackmore’s behavior. Deep Purple was going to have a fire show and go to the stage at sunset to close the festival. The artists who were supposed to perform before did not appear, and the organizers asked the band to go to the stage earlier.

The guitarist refused to do that and closed himself in a dressing room; the police were called. Ritchie was so furious that he broke his guitar during the show, hit a camera with the instrument, and caused a fire. Nothing like that had ever happened at the festival. Deep Purple fled by a helicopter from the police officers; they were fined for the broken equipment.

In 1984, when the classic Deep Purple reunited, the album Perfect Strangers was recorded. The musicians went to the international tour, and all the tickets were sold out immediately. In 1987, the artists presented The House of Blue Light; three years later, Slaves & Masters with Joe Lynn Turner came out.

Before the group’s 25th anniversary, Ian Gillan returned to the group; the album The Battle Rages On… was presented. Its name somehow referred to the permanent opposition between Ian and Ritchie.

Deep Purple has presented 20 studio albums, 34 concert albums, and numerous singles. In 2016, the band was included in the Rock & Roll Hall of Fame.

2017 was marked with the album Infinite; the musicians also announced The Long Goodbye Tour that was going to last for three years.

In 2018, Deep Purple gave many concerts including the shows in Moscow and St. Petersburg, Russia.

Ritchie Blackmore also visited this country and gave shows with renewed Rainbow in April 2018. That was his way to finish his music career.