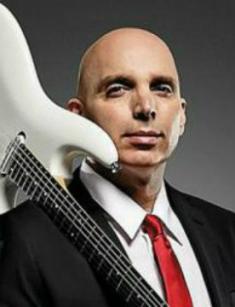 Joe Satriani is the bestselling solo guitarist in the world: he has created six gold and platinum albums including the award for the debuting album of his group Chickenfoot. Overall, more than ten million copies of the artist’s albums have been sold.

Joe Satriani has received the largest number of Grammy nominations after Brian McKnight, Snoop Dogg, and Morten Lindberg: his name appeared in the list 15 times, yet he has not won the prize yet.

Joseph Satriani was born on July 15, 1956, in Westbury, New York, into the family of the Italian migrants. The artist’s grandparents belonged to the Piacenza and Bobbio families. The boy had four siblings.

Joe took the first step to music success at the age of nine. He began with the drums made of a coffee can and rubber practice pads. The father gave his son elements for the success: tom-toms, high hats, and rides. By eleven, Satriani got his first Ludwig drum set.

Soon, Joseph took an interest in the works of Jimi Hendrix, the greatest guitarist of all times, according to Time, and the groups Cream and Led Zeppelin. He stopped playing the drums and thought about the guitar. In 1970, when Hendrix died, Satriani made the final choice: the guitar. Hagstrom III became his first instrument.

The young man’s progress was impressive: he attended additional classes at school and studied music theory and musical notation. Joe also did exercises at home; the guitarist Billy Bauer and the pianist Lennie Tristano tutored him. Soon, the student’s results were so great that he began to give lessons himself. In 1974, Steve Vai became one of his first mentees; later, Vai became a unique solo guitarist and Satriani’s colleague in G3.

Satriani’s father was a musician. When the young man said he wanted to quit school and become a professional artist, he received parental support. In 1978, 22-year-old Joe went to Berkeley, California; more musicians took his lessons: Kirk Hammett from Metallica, David Bryson from Counting Crows, Larry Lalonde from Primus, Kevin Cadogan from Third Eye Blind, and others.

“I started to teach guitar because I needed the money. I had worked as a gardener, a bricklayer, even in a clothing store, but what I really wanted to do was to stick around music”, the artist mentioned in one of his interviews.

Young Joe met Jeff Campitelli; today, he is one of the best drummers according to Rolling Stone. The musicians created the group The Squares together; later, Jeff contributed to his friend’s several albums.

Satriani also spent a little time in The Greg Kihn Band. The money he earned there helped him pay the debuts: Joseph had had loans to release the debuting solo album.

Not of This Earth came out in 1986 and gained critics’ appreciation: Phil Carter from All Music gave it four out of five stars and emphasized its “superior compositions, a signature style, a unique tone, and playing that's out of this world”. He added: “There isn't a weak track on this disc”.

The next years brought the second album Surfing with the Alien: today, it is the most successful work of the musician that made him popular all over the globe. The master spent only $13 000 and recorded the next collection in 1989; it became gold. The 1992 disc earned the platinum status; millions of copies were sold. Two tracks got into Billboard's Mainstream Rock: “Satch Boogie” (№22) and “Surfing with the Alien” (№37). Another hit, “Always with Me, Always with You”, was nominated for Grammy.

The vocalist of The Rolling Stones Mick Jagger noticed the popular disc and invited Joe to his tour supporting his solo album Primitive Cool in 1988. The artists gave concerts in Australia and Japan.

At the peak of success, Satriani presented the album Flying in a Blue Dream in memory of his father; it reached the 23rd position in Billboard 200 and remained there for 39 weeks; it became platinum the next year.

1991 was marked with another Grammy nomination. “One Big Rush” became the soundtrack for Say Anything (1989) with John Cusack, and “The Bells of Lal (Part One)” appeared in Billy Bob Thornton’s Sling Blade (1996).

As the man collaborated with Ibanez, he stopped creating music for a while and presented his own guitar collection Ibanez JS Signature. He shot for the cover of What Happens Next (2018) with one of the instruments.

In 1992, the long-awaited album The Extremist was released; it is the bestselling work today. Sony used “Summer Song” at the commercial of the first portable player Discman.

The next year, Deep Purple invited Satriani to replace Ritchie Blackmore, one of the group founders and songwriters. Joe successfully performed in Japan, and he was offered a permanent membership in the band. Still, the man preferred the solo career. At that period, he presented the albums Time Machine and Joe Satriani; both of them were nominated for Grammy.

In 1996, G3 was founded; Satriani was the only permanent member. Steve Vai, John Petrucci, Yngwie Malmsteen, Kenny Wayne Shepherd, Robert Fripp, Steve Morse, and other guitarists used to play there.

“In 1995, when I walked into my management’s office and I complained that, first of all, saying thank you, I’ve got a great career, I’ve toured the world, and it’s really great, but how come I don’t ever get to play with anybody? So, we sat down and thought, let’s develop something that allows me to play with people I respect and make it a regular thing. After a few hours, we had dreamed up the G3 concert experience”, the artist said in his interview.

In 1998, Satriani presented the album Crystal Planet notable for the hits “Love Thing”, “Ceremony”, and “Up in the Sky”. Two years later, the unique electronic disc Engines of Creation came out; it remained on the 90th position at Billboard 200 for three weeks. Joe continued to present new albums every two years: Strange Beautiful Music (2002), Is There Love in Space? (2004), Super Colossal (2006), Professor Satchafunkilus and the Musterion of Rock (2008), and Black Swans and Wormhole Wizards (2010).

When the artist had spare time, he did charity work. In 2006, he became the official sponsor of Little Kids Rock that provided American state schools with music instruments.

In 2008, the musician founded the group Chickenfoot; the former members of Van Halen, Sammy Hagar and Michael Anthony, as well as the Red Hot Chilli Peppers drummer Chad Smith, joined it.

The next year, the debuting album Chickenfoot was released; the song “Oh Yeah!” reached the 21st position at Billboard's Mainstream Rock, and the music video was filmed. The second album, Chickenfoot III, appeared in 2011.

At the same time, the scandal broke out: Satriani sued Coldplay because their song “Viva la Vida” that won two Grammys included the fragments from Joe’s track “If I Could Fly” (Is There Love in Space?). Coldplay representatives denied it. Eventually, the two sides signed an agreement the details of which were not disclosed.

On April 2012, fans could see their favorite in the movie Satchurated: Live in Montreal recorded in Montreal in December 2010. The directors Pierre and François Lamoureux received a concert movie prize.

In 2013, Joe Satriani presented the album Unstoppable Momentum that spent three weeks on the 42nd position in Billboard 200. Besides, it was included in the top 100 songs in nine counties. Two years later, the 15th solo album Shockwave Supernova was released.

The musician’s personal life is kept secret. He has a wife, Rubina, who also plays the guitar. There are no family pictures on Satriani’s Instagram: one can see only concert photos and videos.

The couple has a son Zachariah. The father told journalists that the boy inherited his music talent: he writes songs and plays the guitar, mandolin, and banjo. According to Satriani, he dreams of performing with his son in G3 one day.

2018 brought the new album, What Happens Next; Chad Smith and the bassist Glenn Hughes from Deep Purple contributed to it. Unlike the previous two discs, Satriani rejected the electronic sounding and counted on the pure sound.

Today, the artist continues to give concerts as the G3 member. The master does not seem to plan the finish of his career: as he mentioned, he has a lot of music in his head, and there is not enough time to record it.